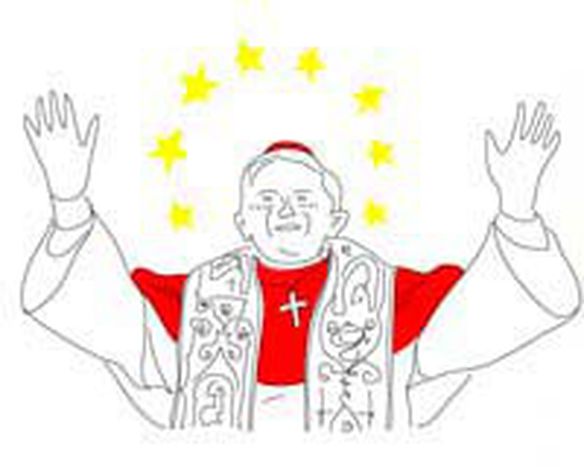 In an EU where interest groups are pulling both for and against secularism, the Vatican has found ways to work to further its goals

With no mention of God in the Draft European Constitution and Turkey as a candidate for membership, some fear that the EU might become detached from its Judaeo-Christian roots. In particular, the Roman Catholic Church, under the leadership of Pope Benedict XVI, has promised to combat what it sees as the excesses of secularism and nihilism in the world, starting with Europe. Any struggle would be incomplete without adversaries and allies. But what are the EU and its institutions to the Vatican? Are they allies, or a threat?

During a recent audience of the Pope with members of the European Parliament from the European People´s Party and European Democrats (EPP-ED), the Pope seemed to stress the role of the EU as an ally. Of the Draft Constitution, even though it contains no reference to God, the Pope said that it contributed to maintaining a "structured and ongoing relationship with religious communities" at EU level. The EPP-ED was not shy about stating its willingness to cooperate with the Pope. "The EPP-ED Group, as an advocate of Judaeo-Christian values, is determined about the spiritual and moral dimension of the European project," said its leader, Hans-Gert Pöttering.

The situation for the Vatican seems ideal. With the recent enlargement, several large and predominantly Catholic countries have joined the EU, most notably Poland. Where EU policymaking is concerned, this could make the Council more receptive to the messages of the Vatican. The presence in the European Parliament of the Polish League of Families, a group of extreme right MEPs, together with the fact that the EPP-ED is the largest political group in Parliament, means the Vatican has strong potential allies in that institution. However, it was the same Parliament that forced the Italian candidate for the European Commission, Rocco Buttiglione, to step down because of his views on the role of women and homosexuality. Views that he said were based on his Catholic faith.

And whereas recent enlargement may well have suited the Vatican, future enlargement seems more like a threat. Council, Commission and Parliament have all agreed to allow Turkey to try and become a member of the EU. In 2004, the then Cardinal Ratzinger said that Turkey, in which the majority of the population is Muslim, is "in permanent contrast to Europe." Though his name has changed to Pope Benedict XVI, it seems unlikely that his views on Turkey have changed as well.

Finally, EU legal experts have recently criticized the Vatican's practice of concluding bilateral treaties called concordats with EU member states. The recent concordat with Slovakia centres on the right of doctors and others to conscientious objection when it comes to, for instance, abortion. In their report to the European Commission the EU legal experts have raised questions concerning the compatibility of such concordats with EU law.

The enemy of my enemy…

So the relationship between the EU and the Vatican is not always an easy one. Still it seems that the current Pope seeks to make the EU his ally where he can, his adversary only where he thinks he must. In Brussels, both the Vatican's ambassador - his Papal nuncio - and the Commission of the Conference of Bishops from EU countries (COMECE) work to monitor and influence EU policymaking. The Vatican, like any interest or lobby group, seeks its allies and finds its adversaries in different places for each dossier it has an interest in. Even though the EU does not always see eye to eye with the Vatican, the Pope has chosen to try to work together where possible. Pope Benedict XVI seems to have taken the words of Jesus in Luke 9:50 to heart: "But Jesus said unto him, Forbid him not: for he that is not against you is for you."