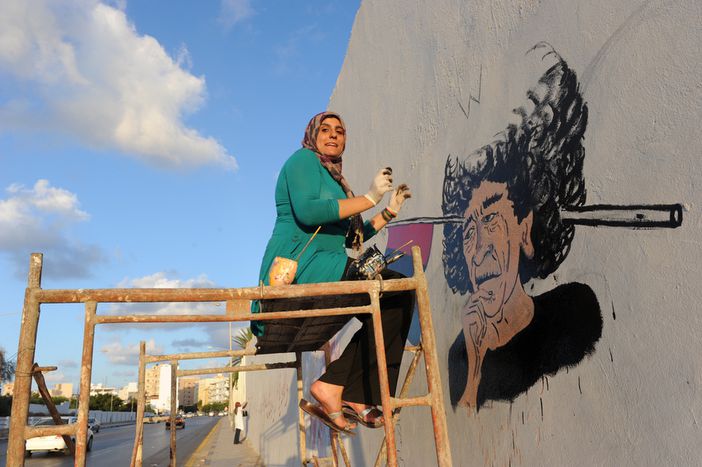 On 20 October the world saw a mediatised repeat of bloody images and videos of Osama Bin Laden and Saddam Hussein on their deathbeds: Muammar Muhammad Abu Minyar al-Gaddafi, 69, was killed in his hometown of Sirte. French, US and British forces were part of the Nato airstrikes in the Libyan civil war which began in February 2011.

Angela Merkel: ‘Germany relieved and very happy about this’

‘This brings to an end a bloody war that Gaddafi waged against his own people. The path is now finally clear for a fresh political start, in peace.’ True to form, the German chancellor’s statement shows that when it comes to Libya Germany enjoys going whichever way the wind blows. Germany tasted the flavour of Libyan terror attacks during the 1980s, notably the bombings of Berlin’s club LaBelle in 1986, which killed three.

Read 'Gaddafi and Europe: it was nice while it lasted, wasn’t it?' on cafebabel.com

After former chancellor Gerhard Schröder allowed for a normalisation of relations with Gaddafi signing a declaration of compensation for the victims in 2004, economic relations resumed. Libya delivers oil, German enterprises invest billions in it. Apparently, Germany was supposedly also ‘very happy about this' too. Echoing the words of Hillary Clinton and David Cameron, Merkel said that ‘Libya should now carry out political reforms to ensure the achievements of the Arab Spring cannot be undone.' Is that why Germany (in the form of Guido Westerwelle) abstained on actions in Libya at of the UN security council in September?

The wind is blustery as the conservative prime minister of Britain explains that this day is a victory for Britons; remember policewoman Yvonne Fletcherkilled outside the Libyan embassy in 1984? Remember the the PAN AM flight 103 Lockerbie bombing killing 270 in Scotland in 1988? Libya took responsibility for it. Remember IRA? Libya funded the Northern Irish terrorist faction for their operations. Like Germany, the UK has known grief caused at the hands of Gaddafi's regime. '‘Today the Arab Spring is a step further away from oppression and dictatorship and a step closer to freedom and democracy,' he said. Remember: this was a good day for Britons, and Libyans too.

Gaddafi's death prompted an ode in Latin from the Italian prime minister about ‘glory in the world passing'– he feels that nothing can be done to avoid it. The colonel (spelt Gheddafi in Italian) was a real friend for him, as close as Putin. Libya has always been one of the greatest commercial partners for Italy, even pre-Berlusconi. In 2008, Berlusconi and Gaddafi signed a friendship and cooperation treaty in in Benghazi so that Italy would pay for its former colonisation of Libya (between 1911 and 1943), namely five billions dollars for building infrastructures. The dictator was always welcome in Rome: in June 2009 Gaddafi pitched his tent in the public park Villa Pamphili. Just fourteen months ago he lectured 500 paid Italian hostesses that ‘islam should become the European religion’.

Spain's foreign minister: ‘Most important thing to appeal for reconciliation and unity of all Libyans’

Spanish relations with ‘Gadafi’, as the Spanish spell it, during the last decade were quite ‘extravagant’ as JoseMaría Aznar would say. In 2011 the former conservative prime minister called Gaddafi an ‘extravagant man, but not stupid’, even extending the statement to Gaddafi’s having become an ‘extravagant friend, but a friend’. Current socialist prime minister JoséLuis Rodríguez Zapatero has always been seen as a good interlocutor between Spain and North Africa, even walking hand-in-hand with him in November 2010. During Gaddafi’s official visit to Spain in 2007, Gaddafi was ‘installed’ in his tent at El Pardo Palace, the royal family’s official residence. ‘The confirmation of the death of Gaddafi and some of his closest collaborators is the final point of a very, very sad period for the Libyan people and the beginning of an era in which the future can only be decided by the Libyan people,’ said Soledad Jiménez after Gaddafi’s death was announced in Spain. The media frenzy (Spain contributed weapons in the Libyan civil war) was eclipsed later on in the day after ETAannounced an ‘end’ to terrorism after 43 years of activity of the Basque separatist group and 829 deaths.

‘We congratulate the Libyan people on bringing to an ultimate end the dictatorship of many years’ standing,’ ran the official statement. In 1978, colonel ‘Kadafi’ (as spelt in Polish) discussed the ideology which both the People’s Republic of Poland and the People's Socialist Libyan Arab Jamahiriya (as the country was known at the UN between 1977 and 2011) shared, and met with the last communist president Wojciech Jaruzelski, before putting on their business socks.

Gaddafi had the money and the castles to build on sand, whilst Poland had engineers willing to get their mits on any kind of passport. Values are values and business is business, so sixteen years after the end of communism in Poland, Polish prime minister Marek Belka was in Tripoli to negotiate Poland’s ensuing debts to Libya. Contradictory: hadn’t Polish workers worked hard enough to build Gaddafi’s Great Libya?

France’s Nicolas Sarkozy press release: ‘French at Libyans’ side to support them in the future’

The French president and the now-deceased Libyan leader 'Kheddafi' had an embarassing friendship. In July 2007, French Lady Cecilia Sarkozy even visited Tripoli to campaign for the release of five detained Bulgarian nurses.

In December that year, Gaddafi pitched his tent in the gardens of the Hotel Marigny which has been the residence of foreign leaders visiting the Republique since 1972. This was to the public disdain of his-then justice minister Rama Yade.

The Maltese have only recently stripped Gaddafi of the honours they had bestowed on him, including medals and a garden that they had named after him. 'It's quite embarassing that we have a long history with him,' says one young Maltese journalist. 'Malta is important for those refugees leaving Libya, but apparently we're not doing enough for those who don't have the financial means to leave. But Hillary Clinton just this week super praised us.'

Images: main - 'Atmosphere in Tripoli on 8 September' (cc) by Ammar Abd Rabbo/and crops by (cc) mshamma/ both courtesy of Flickr