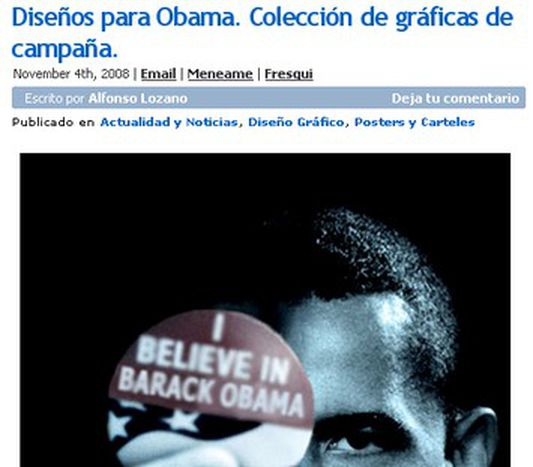 Everything is possible. From waking up to utopia, European bloggers are discussing a black man in charge in the world’s most powerful nation. On 20 January, Barack Obama became president of the USA. But what will happen to him tomorrow?

In Spain, the colour of Obama's skin is being widely discussed by bloggers. On Políticamente Incorrecto.es ('Politically incorrect') journalist J.O.Noville launches the debate; has the death of Obama's grandmother provided him with an advantage? These marketing questions aside, Hispanic bloggers are expressing their delight. For example, a photograph of Obama takes pride of place on the PSOE (Spanish socialist party) website, with the caption reading Change is already a reality 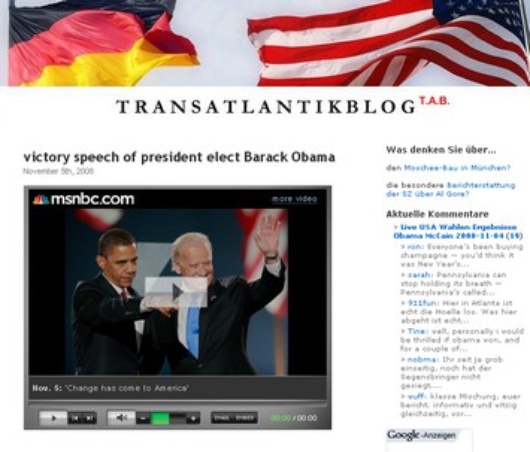 Transatlantikblog T.A.B. followed Obama’s every step on election night. After an avalanche of statistics, photos from the party, a post about Penn State University students getting up at 7am (extraordinarily) to vote and finally the relief: 'This historic day will live on in our memories forever.' Homer Simpson, who also voted for Obama, according to datenwachschutz.de. According to godelta.de, Obama is 5% German, a distant relative of Obama’s mother came from the Rhénanie-Palatinat region. His first official visit to the region is eagerly anticipated, alongside that of Kurt Beck Ich bin ein Pfälzer! ('I am a Palatinate!')

Poland: To back Obama is to be a 'liberal European'

The Polish are very happy following Obama’s victory, even though amongst them there are some who have not gotten over it. That is because here, the Bradley affect has been widely discussed. Obama is considered a president who is going to profoundly change the United States and improve its relations with Poland. In regards to McCain, bloggers believe that a string of fateful errors led to his downfall, like his choice of Palin, the intervention of Cheney in his campaign and the fact that he was unable to eliminate Obama at the start of the campaign, when he was nothing more than Hillary Clinton's rival for the Democratic party vote. In conclusion, the Polish believe that without doubt, Obama was the candidate to back if you want to be considered a 'liberal European'

Italy: making fun of the extremes 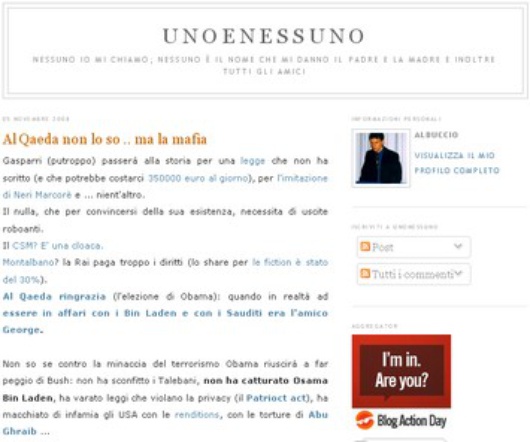 The blog Unoenessuno ('One and no-one') characterises the Italian extreme right. Alduccio, an amateur in superlatives, states that “Obama has won: a black immigrant who has steered Kenyan democracy, with no particular interest in petrol or arms”. In the Padania region, home to the Lega Nord, a blogger states that 'they are ready to welcome Obama stacks of work.' The Alleanza Nazionale is of the opinion that 'We already had a black president for twenty five years,' states Alduccio ironically, referring to dictator Mussolini´s time in power

In the babel blogosphere

Radio Free Cheesesteak is the new blog from the babelian community, created especially for election night. US expatriate Matt Pagett followed the emotion fuelled night live from the Democrats HQ in Dublin. His American friends have commentated from Philadelphia, painting a transatlantic picture of the historic election night.

Later, when the results were announced The Angry American, a more emotive cafebabel.com blogger has written that for him, Americans, their institutions, their constitution are full of flaws. However, after a long critical essay, he ultimately asserts his pride: 'But finally, we have stood up and we have decided that the way in which we behaved was ultimately, not correct. We have elected, to the highest office, a man who represents the American ideal, and that is the most important thing for me.'

France: Between sainthood and an attitude of mistrust 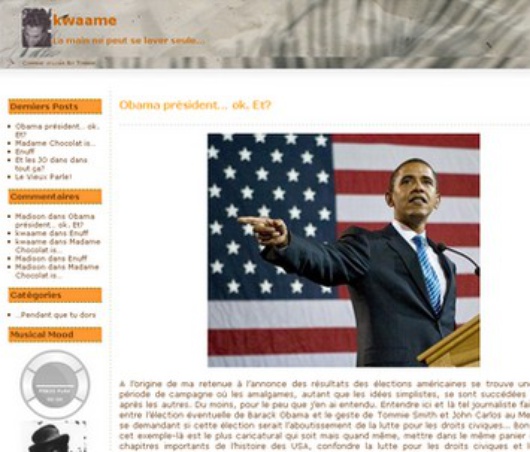 The fan blogs are being inundated this morning by dreamy-eyed bloggers, and in first place, the good news. Taking La Flat Eric Attitude as an example, from waking up to utopia: 'They’ve done it! I have a mad feeling rushing over me, it’s as if we’ve learned of the end of a war, as if we’ve learnt that everything is going to be alright, utopia as the weapon, I find myself thinking of a new world, and if it has arrived …'

Or not, as Kwaame demonstrates 'Attention! I am not saying that I am dissatisfied, as a result of this election, as I am not. In fact, I am divided. Too suspicious, perhaps,' he announces, as he describes a campaign full of confusion. 'It is understandable that now and again journalists make the link between the election of Barack Obama and the gesture of Tommie Smith and John Carlos at the 1968 Olympics in Mexico City in wondering whether this election will drawn a line under the fight for civil rights. But to tie these three important chapters in US history together and to confuse the fight for civil rights with the Black Panthers, is hazardous, even counter-productive when considering the quality of the information conveyed.'