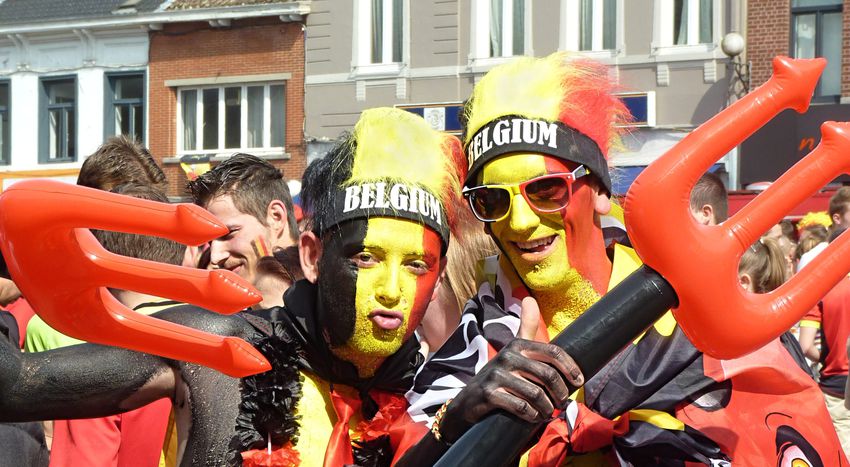 The 2016 UEFA European Football Championships are underway in France. With the competition extended to 24 teams, Euro 2016 promises a longer tournament, with several sides making their grand debut. Cafébabel gives you a run down of a few of the national sides, covering the general mood, some quick predictions and even current fashion trends. Grab your pitchforks – here comes Belgium.

Whatever anyone says, this time the Euros are make-it-or-break-it for the Belgian side. Having fielded a team comprising some of the best players in a generation – Eden Hazard, Thibaut Courtois and Kevin De Bruyne to name but a few – the Diable Rouges (or Red Devils) will have to defend their position as competition outsiders, as well as their coveted 2nd place in the FIFA world rankings. The media may call this team the "golden generation", but the Devils are taking their time when it comes to living up to this accolade. After a defeat against Argentina in the quarterfinals of the last World Cup, are they ready to finally scoop their first title in a major international tournament? We'll get our answer on the 10th of July... or maybe as early as the 22nd of June.

The tournament will start spectacularly with a landslide 2-0 victory against Italy [sadly a prediction that didn't come true, ed.]. A poor performance against Zlatan Ibrahimovic's Sweden won't prevent the Belgians from finishing top of their group, before getting another win against the Croatian midfielders in the last sixteen. For more information about the quarterfinals against Germany, you're gonna need a crystal ball...

You can almost hear a pin drop in the Belgian team's training camp in the Bordeaux region. Players are holding an intervention along with their team psychologist as they try to get to grips with Maroune Fellaini's new choice of hair colour.

Even though he's been criticised for his international performances, which at times are light years away from what he does with his club, Eden Hazard is still a darling in the Belgian public's eyes. Capable of the best, as well as the worst, all eyes will be on the 25-year-old captain. He'll need to effectively lead his squad if Belgium has hopes of reaching the final four (at last!) as they did in the 1986 World Cup. Go on Eden, go for it! Forget all the pressure and remember the time when football was just a bit of fun... remember the kick-abouts you had with your mates as a kid in the garden.

"They didn't ask me to look pretty or to play champagne football, but to win."  That's how Marc Wilmots responded to his critics when asked about his team's play style, judged by some to be too defensive and lacking in fireworks. It's certainly true that they're a far cry from Barcelona and Neymar's weaving dribbling skills but as soon as the ball hits the back of the opponent's net, you can swap your champagne for a beer. A Belgian one, of course.

What you'll hear about the Red Devils

"We really have to win these Euros. If only to stop the French from winning, otherwise they won't shut up about it for the next ten years, and that just isn't an option." We Belgians really love the French, I can tell you.

20 years of the Euros