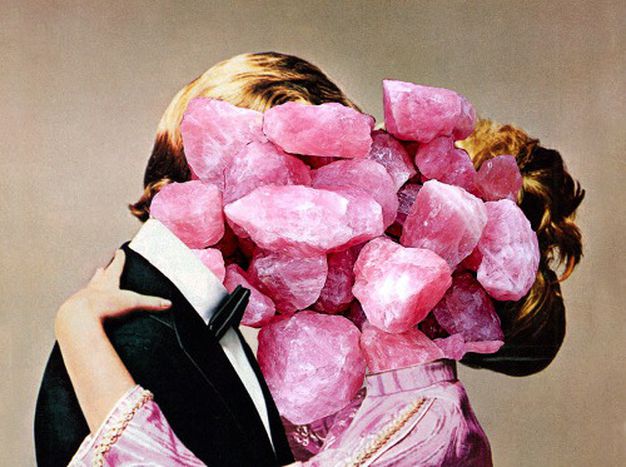 Eugenia Loli: Collaging without the Search for an "Artistic Style"

Vintage stock photos combined with bright colours, and compositions that give new perspectives on concepts we wouldn't normally give a second thought. That's one way to describe Eugenia Loli's collages. But Loli holds the view that the search for a specific "style" is "artistic death." cafébabel takes a glimpse into the artist's mind to see how art could be seen in a new light.

Eugenia Loli was born in Athens, grew up in the Northwest of Greece near the city of Preveza, and lived for a while in a small village in the mountains. She then moved to Braunschweig, Germany, and subsequently Surrey, England, before moving to the California Bay Area with her French husband. In short, she's a global citizen. It's important to keep this in mind when considering the nature of her work, which creates visual narratives of objects and people in new and utterly surreal contexts, because without her multifaceted experiences, she might not be the artist she is today.

While growing up in Greece, she liked to draw a lot, but because of the lack of economic opportunities, she decided to cast aside her aspirations of becoming an artist and decided to go into the tech field. She studied computer programming, which in turn led to a life in blogging, animation, and eventually, filmmaking. Combining the latter two, she filmed a number of music videos for local artists in the Bay Area in 2012, and as she describes it, "collaging kind of came naturally after that."

Death of the Artist 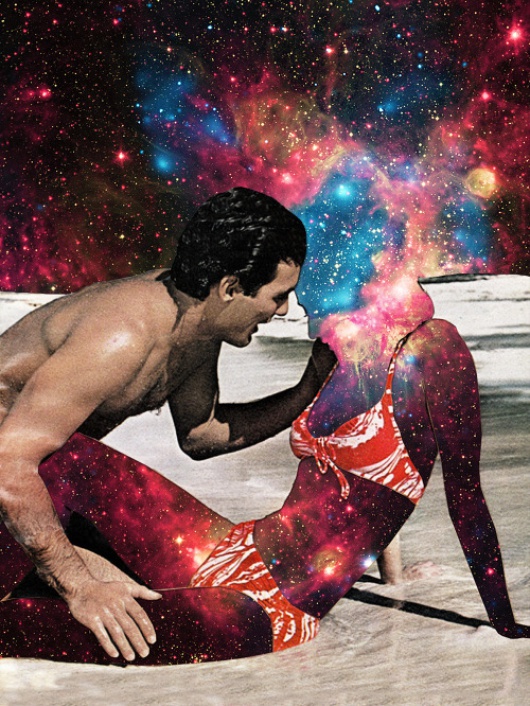 But what's really going on in this artist's mind? Well, aside from the wild and thought-provoking worlds she projects onto her compositions, Loli has a series of philosophies regarding art that might not be so readily gleaned from her work. For one, Loli gives away her art, which may seem especially perplexing to other artists who try to make a living with their artwork. "I believe that art loses its true value when it becomes fully commercial, because the artist then tries to please the latest visual fashion or the wishes of his customers. How am I supposed to describe to you who I am, when that has a price? It's an oxymoron. Art should be shared freely." But weren't some of the greatest artworks throughout history the result of an attempt to please the patron? Like Michelangelo and Brunelleschi, for example, who had, to a certain extent, to satisfy the tastes of their Medici and papal patrons? Well, now we live in a different age. An age where tools like computers and the internet allow for anyone to become an artist. But because today there is so much, as I would term, artistic inflation, it makes the dynamics infinitely more complex for an artist to become recognised.

That's why for some artists it may be all the more imperative to find a style, to stand out from the crowd. But according to Eugenia, this is a mistake. "Finding your own style means doing the same thing over and over, just so your work is recognisable at first glance and sells easier. That's what it amounts to." Although patrons of the Renaissance also had the intention of using artwork as tokens of wealth, they also had more idealistic intentions: to create a more refined manifestation of the ancient world and uplift society out of darkness. Today, however, modern patrons and galleries use their talons to eviscerate the artist's spirit and freedom by pressing them deeper into moulds, all to make a quick buck. "It's what galleries ask artists to do, so they can sell their works easier: to work on a specific, unique style, and never deviate from it. This non-deviation creates artistic stagnation, in my humble opinion." Another term she uses is "artistic death." But what about Loli's collages? There surely seems to be some similarities between her many works, after all. "I don't think I have a single collage style. I collage dada, I collage surrealism, and I collage pop art. However, in most of my artwork, there is some sarcasm. That sarcasm kind of remains constant. That's why if I were to say that I have a style, then it's sarcasm and not visual specifics."

Photoshop as a Medium 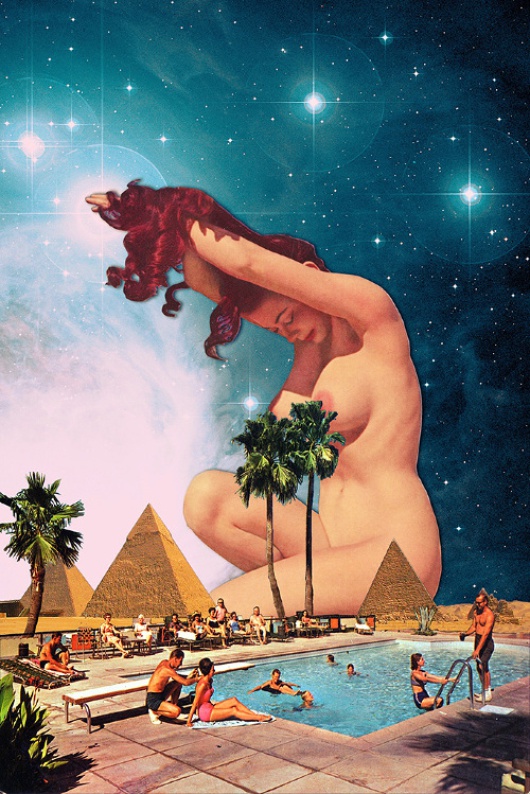 At first, I was surprised to hear that she doesn't cut out photos from magazines and create a pastiche on some kind of canvas or board. All the collage artists I've ever met have done that, and it's the only way I ever thought collage could be done. But Loli uses Photoshop, and it turns out that using it allows her to stay true to her philosophy on art, because she can then give away her works for free in high resolutions. "The reason why I work digitally is because it's faster, and it's more flexible. On top of that, they look the same as paper collages when printed. Besides, I still have to own all these vintage magazines and hunt for the images that other paper collage artists hunt for. The only difference is that I cut them on Photoshop instead of with scissors." This also allows her to resist the idea of "a unique piece of artwork" that many art collectors are after, and which she calls "elitist bullshit." For her, it's the artwork itself that matters, not how it's valued by people who have more money than they know what to do with. "It doesn't matter if it was printed on a piece of paper within Photoshop, or if it was cut up from old magazines and put together with glue. In the end, if it's the same artwork with the same deeper message, I see them as equals. The message is all that matters to me."

But of course, her artistic philosophy doesn't just hinge on her negative view of the relationship between artist and patron. Ultimately, she views art as being part of "one's utopia." "It's both what gets you 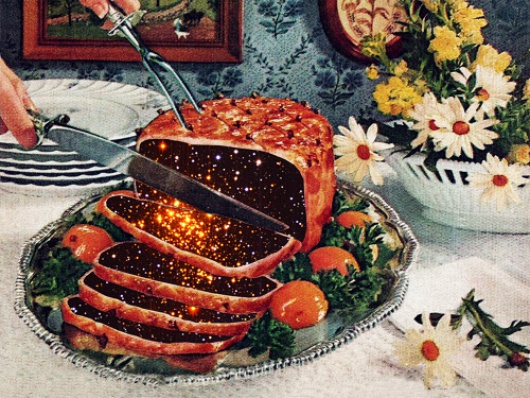 through life in our current world, but also describes your dreams about where we're going as a species." Sometimes she catches herself, when walking through a park or through the city, mentally superimposing collages onto her surrounding reality, which is something she sometimes jokes around about with her husband. Although she didn't give me any specific examples, one can only imagine her seeing things like giant octopuses wrapping their tentacles around nearby skyscrapers, or pieces of colourfully wrapped candy billowing out of chimneys.

Because most of her work is licensed under the Creative Commons BY-NC, anyone can download, print, and do with her collages as they please. She does, however, sell her prints for those who don't have a photo printer at home. She even offers things like iphone cases and shower curtains! To download or see more of her artwork, or for inquiries regarding purchases, check out either her website or tumblr.