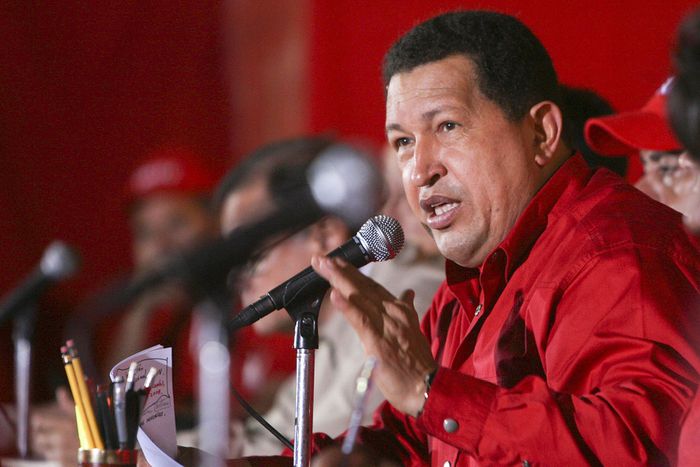 Venezuela's president died of cancer on 5 March, aged 58. The socialist had ruled the oil-rich country for 14 years with a policy of redistribution and nationalisations. Selections of how the Finnish, Swiss, Swedish, Slovenian, Polish, Dutch, French and Spanish media reacted in the fallout

The emancipation of Venezuela and the entire region has not ended with Hugo Chavez' death, the Polish news website writes: 'The poor and disenfranchised now know that without their votes, no one can come to power by means of democratic elections. They are ambitious and can articulate their ambitions. Probably the biggest legacy that Chavez left behind is the political shift to the left and the change in mentality among the poor, who were always neglected in the past. This concerns Venezuela first and foremost, but other countries as well. The late president also encouraged leaders and sympathisers in the other states of Latin America, as well as the entire Global South. Now Venezuela faces a heated struggle over Chavez' successor. Old conflicts will rise to the fore once again, and presidential elections will have to be organised. They will also be a sort of referendum on Hugo Chavez' legacy’

Venezuela faces an uncertain future following Chavez' death, writes the Dutch liberal daily: ‘In the eyes of the elite Chavez was a megalomaniac populist. A man who sacrificed democracy and the economy and bought his popularity with petrodollars. But even Chavez' greatest critics have adopted his strategy of tending to the poor. The oligarchy of Venezuela's old oil elite was replaced with the power of the masses. Now he is dead but a mini-Chavez is already poised to take over: vice president Nicolas Maduro.

'In the eyes of the elite Chavez was a megalomaniac populist'

He has announced that he wants to preserve Chavez' legacy. But the socialist revolution had already started to show some cracks: the economy is stagnating, violence is increasing. If the whole model falls apart the poor, as is so often the case in Venezuela, will be the hardest hit. But they probably won't blame their hero Hugo Chavez. The people's oil king can take up his place next to [independence fighter] Bolivar in the pantheon where the immortal Latin American leaders lie’ (Ykje Vriesinga)

‘Man of stature, characterised by a profound humanity’ - L'Humanité, France

Chavez was a tremendously dynamic politician, and it was this quality that makes him immortal, the French communist daily writes: 'The people loved him because he transformed the lives of millions of social pariahs and because he combined verve and courage. Between 1999 and 2008 he tripled government spending per capita, slashed poverty by 50 percent, introduced free healthcare and education, created the Bolivarian Alliance for the Americas as an answer to free-trade agreements, and helped form the Community of Latin American and Caribbean States without the US. That's why this man of stature, characterised by a profound humanity, was also profoundly despised. And that's why the international media and the conservative camp and the false left vilified him as they did. But some of those who pass away will never die' (Jean Ortiz)

‘'I am not the cause, I am the consequence'’ - El Huffington Post, Spain

Hugo Chavez' populism was the result of the major parties being discredited, the Spanish left-liberal online paper points out: ‘During a meeting with journalists in Madrid, the head of government once said on the subject of his great popularity: 'I am not the cause, I am the consequence'. This was not just an empty phrase. On the contrary, perhaps it was the key to understanding the Chavez phenomenon. Certainly there are plenty of reasons for his triumphal political success. But the most important was that the two major traditional parties - the social democratic Acción Democrática and the christian democratic copei - were totally discredited after plundering and humiliating the poorer classes for decades. In the same way many European political experts marvel at the most recent election success of the corrupt Silvio Berlusconi and populist Beppe Grillo, without taking the trouble to thoroughly examine the causes behind this new scenario’ (Marco Schwartz)

'Politics were too focused on his person' - Kaleva, Finland

Chavez' politics divided Venezuela, which will now be subject to change, the Finnish liberal daily writes: 'A strong opposition has emerged in the country which among other things has at least managed to shake Chavez' status. Hundreds of thousands of Venezuelans have protested with their feet and left the country. Even if the man Chavez named as his successor, Vice President Nicolas Maduro, has an advantage and leads in the opinion polls, the result of the presidential election taking place in four weeks' time is by no means certain. The likely counter-candidate is Henrique Capriles, who led the opposition in earlier elections and is a strong opponent of Chavez. A bitter struggle for power has been raging in Venezuela for years now. It's clear that the two men will fight a tough battle against each other once the period of mourning is over. But no matter who becomes the next president: after Chavez Venezuela is no longer what it used to be. Its politics were too focused on his person for that'

Nicolas Maduro, who has deputised for Chavez up to now, is said to have good chances of winning the upcoming presidential election. If he does he'll continue with the Bolivarian revolution, the Swiss liberal-conservative daily presumes: 'During the three months in which Nicolas Maduro has acted as Chavez' deputy he has cast himself as the latter's conscientious heir. Reputed to be moderate, he is quick to condemn both the 'parasitic bourgeoisie' and 'yankee imperialism'. Nothing in his rhetoric bodes the slightest change of course. Not even on an international level. The death of his mentor will not put out the flames of the Bolivarian revolution. If it does end one day, it will be under the weight of its own deformities, the dark side of the undeniable social achievements bequeathed by the comandante: the extreme confusion in the machinery of power, the suffocating corruption in the bureaucracy, the lethargy of the private sector, and the inflation that looks set to bring on yet another currency depreciation' (Angélique Mounier-Kuhn)

Venezuela's political leadership must now work to stabilise the economy and the country's democratic institutions, the Swedish liberal daily urges: 'With his authoritarian rule wrapped up in a formally democratic framework, Chávez was reminiscent of Vladimir Putin, although Chavez had far more charisma. The problems his successor faces are huge: inflation is high and dependence on oil prices remains unchanged. In his 14 years in power Chávez failed to create any industry worth mentioning. Now the top priority is for Venezuela to stabilise its democratic institutions and implement a responsible economic policy without losing sight of the social dimension. The lack of a fair redistribution of wealth in this oil-rich country was what aided Chavez' meteoric rise to political power. The opposition must bear this in mind'

Time will tell whether Hugo Chavez really created a new political counterweight to the US, the Slovenian conservative daily writes: 'Washington will be watching very closely to see who replaces Chavez as president. Apart from the need for oil, Venezuela's influence on Iran and Cuba must not be disregarded. Anti-Americanism is the common denominator for the three states, and 'revolution' is an oft-heard word. If Chavez really was able to push through revolution as an answer to neo-liberal capitalism, he may be imitated for a long time to come. But if revolution was just a way to realise his own personal ambitions, he'll join the long list of revolutionaries on the rubbish heap of history. The revolutionaries, that is, whose ideas died with them' (Vojislav Bercko3)