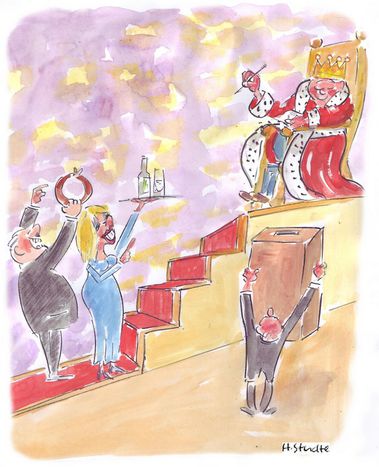 As a third of voters in Europe get set to vote in the European elections between 4-7 June, we ponder expressions ranging from 'election sausages' in Poland to 'rolling balls around' in France. Weekly sayings

Thousands of polling clerks and electoral assistants must be heaving a big sigh at the moment across Europe. Naturally, every candidate considers themselves to be erste Wahl ('first election', aka first choice) in German. But how to persuade the ones ‘choosing’ them – the voters? Finely honed manifestos and campaign promises are the order of the day. The Poles have an expression for this – kiełbasa wyborcza or (literally election sausage). The expression dates from ever since election candidates in Galicia started laying on public picnics in the nineteenth century, softening up the people with vodka and sausage. In American, a similar expression is pork barrel.

The German verbs wollen (to want) and wählen (to choose/ vote) share a common root, while Votum

(vote) comes from the ancient Greek word for ‘oath’. Equivalent concepts in the romance languages stem from the Latin verb eligere (to select). Linguistically speaking, at least, the ‘elected’ are automatically the ‘elite’. But do MEPs look at their mandate as public duty and do they see it as some kind of freestyle event? This is a question that politican-exposing web portal parlorama.eu, among others, is thinking about.

Not every candidate will be voted in, of course. Those that fail are said to have been blackballed in France (blackbouler

). The phrase is borrowed from the freemasons: in the anonymous voting ritual to decide whether prospective new recruits should be initiated, a black ball in the bag signified rejection. The whole process of a runoffelection in France is termed ballotage

(rolling the balls around).

According to most predictions, coalition-forming is likely to continue in the future new European parliament. Politics makes for strange bedfellows

we would say in England, quoting from Shakespeare. Whether these are unions born of emergency circumstances or inevitable, natural collaborations arising from everyday political machinations, the website votewatch.eu wants to shed light on coalition chaos. After all, Wer die Wahl hat, hat die Qual

, ('whoever has the choice, has the problem') - the choice is difficult, as the Germans remind us.