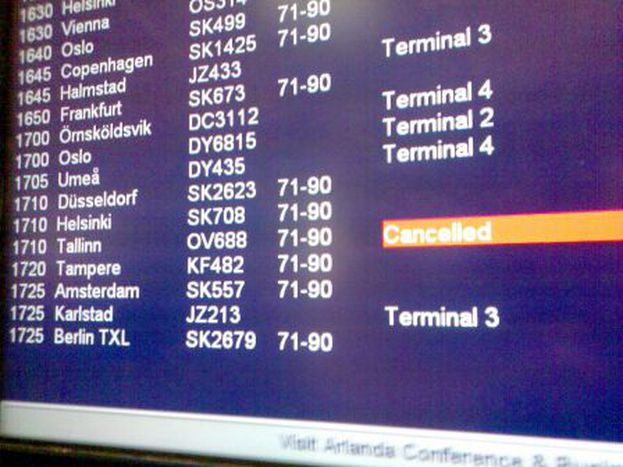 Discovering that the early afternoon Stockholm flight had been canceled has been frustrating, it is true. But not getting any information from SAS counter because, they told us, Estonian Air is not paying them anymore is not even frustrating. It is just priceless.

Once we crossed the terminal doors and we matched the small, red “canceled” label with the number of our flight, we did not even felt like complaining too much: we knew that nowadays Estonian Air is far from being a secure and reliable company and this was, somehow, nothing more than the confirmation of our common fear.

What is indeed quite peculiar is what we happened few minutes later when, as naturally happens in such situations, we went to SAS desk to get some hints about our weekend and our appointment already fixed in Tallinn.

And I say peculiar because, showing us a sincere smile, the blond employee left us quite disappointed with her “I do not know. Estonian Air is not paying us anymore so we do not get such informations from them. Let me ask to a supervisor.”

What?! SAS does not know because Estonian Air is not paying anymore?! Is it a joke!?

Obviously it is not and, when I smile and tease by asking her whether they run into bankruptcy overnight, she surprises us once more by answering “Not as far as I know”.

Few minutes later we head to another desk, one of those suspicious ones representing some hundreds of small companies and there, finally, we manage to solve everything and our tickets are immediately changed for permitting us to catch the next flight.

With some kind of bitter aftertaste, though.

Because, while sitting for some hours at our gate and counting the people waiting for the same plane as us, we cannot stop thinking that, probably, the only problem Estonian Air had today was the reduced number of people traveling between Sweden and Estonia. That they simply cheated on some few people for saving some money and some fuel.

What is then even more bizarre, is a phone call we get right few seconds before entering the plane, during which another Estonian tells us that her Estonian Air flight from Athens planned for tomorrow morning had been re-scheduled for another time and another city.

It might be that something is getting a bit too weird around the blue-ish troubled company as it might also be that we have simply been unlucky victims of a bad-but-not-unusual day in the history of transports.

What is clear, however, is that today we felt a bit more sympathy for Estonians. For all those people who, like us with Estonian Air today, keep going blindfolded and without of any idea on where their country will end up because of all those suspicious “ I do not know” they are constantly answered.