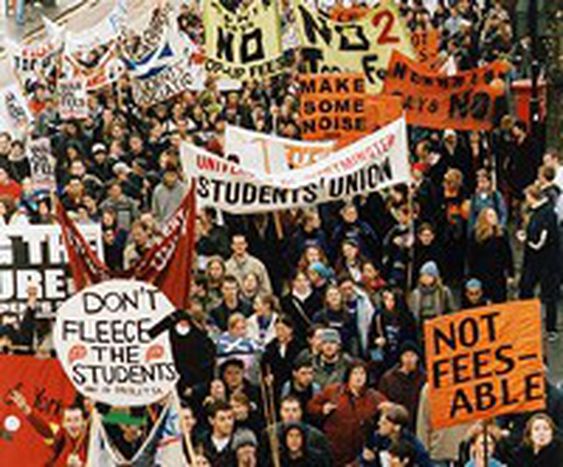 Whilst the Bologna process lays the foundations for a European higher education area, the future for the next generation of English students is not looking so rosy.

For the majority of English students, the two cycle university system and three year undergraduate degrees proposed by the Bologna process (the European university harmonisation programme) is the norm. But that this model was chosen as the base upon which to develop a system with a strong “social dimension” is rather ironic, given that over the last eight years the British Government’s treatment of students has been an absolute disgrace.

Things can only get better?

Upon coming to power in 1997 many saw the Labour government as a breath of fresh air. Eighteen years of Conservative rule had taken their toll on education and it seemed that things could only get better. The Labour election manifesto, which promised to make education its “number one priority”, was silent on introducing student fees , yet by 1998 tuition payments of up to £1000 per year were introduced for all those attending English universities. I say English, rather than British, because devolution has meant that students in other parts of the UK, for example Scottish students attending Scottish universities, are not faced with fees. With the introduction of student loans and the abolition of maintenance grants, the average graduate in 2001 was in debt to the tune of £12,600. Prior to the 2001 election many were concerned that the government would dramatically increase student fees if elected for a second term in office, but fears were allayed by the following undertaking on page 20 of their 2001 manifesto, “We will not introduce top-up fees and have legislated to prevent them”.

Having made this promise to the people, two years later they decided to phase in new ‘top up fees’ which will come into existence next year. Under this plan universities will be permitted to charge up to £3000 per year and this is part of a wider scheme to ensure that 50% of people are in higher education by 2010. This may seem a well meaning way of ploughing money into an under-funded university system, but it simply does not stand up to scrutiny for several reasons.

Firstly, in their desire to widen access to higher education, Labour fail to make a fundamental distinction between the ‘opportunity’ to go to university and the absolute ‘right’ to do so. Nobody should ever be denied access by race, gender, religion, sex or socio-economic group, but it is not the ‘right’ for every school leaver to attend university. What is more, not everybody needs a degree. In a country with such a shortage of labourers that plumbers can command a better salary than a doctor, this arbitrary target figure sorely neglects apprenticeships and vocational courses. This can surely not be good for the labour market.

Secondly, the new system will place the next generation of students in up to £35,000 of debt upon graduation. Whilst many people denounce students as lazy scroungers who spend three years watching daytime TV, they fail to see the wider picture: who cures their cancer, teaches their children and brokers their divorce? What’s more, on average, university graduates pay more tax and social security in their lifetimes. For these reasons and more it is outrageous that a generation of young people will start their professional lives burdened by such huge amounts of debt. This system is little more than a tax on ambition and that the best universities can charge the top rate will mean that only the richest (or the very poorest, who get special benefits) will get access. The current administration, who purport to be social democrats, should hang their heads in shame.

To any prospective English student reading this article, I offer the following advice. Make the most of the Bologna process and any future European Higher Education Area, learn a language and go to university elsewhere in Europe. When you graduate and settle abroad, the British tax system will suffer but don’t feel too bad – after all Labour will just find another social group to bleed dry. The under 5’s? The elderly? After having stooped this low, little would surprise me…