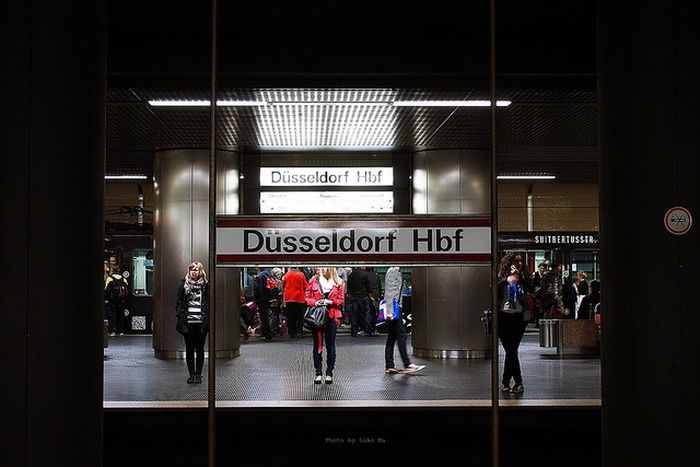 Some months ago, the INE revealed that nearly 4.000 Spaniards headed for Germany in the first semester of 2014. Two years beforehand, Sara Cruz and Ainara Lázaro packed their suitcases for Düsseldorf in a moment when the arrival of European foreigners into Germany was increasing notably. Since then they have been inmigrants, like those that not long ago where "annoying" in Spain.

Towards the end of October 2012, the two youngsters took a flight from Bilbao to Dusseldorf with no return ticket. Sara, moved by her own family migration experience to Germany, convinced Ainara, that wasn't able to find a job in Spain, to start a new life away from home. "The family situation of both influenced us, but mainly we left because we couldn't get a job", remembers Sara.

If there is a feeling that they remember more than any other from that landing moment in the capital of Noth Rhineland was the uncertainty.  In addition to the nerves facing the unknown land, their main worry was to confront a language that was completely different to their own (both their first languages are Spanish and Basque). None of them could imagine at the time that they would overtake that barrier with the help of many that, simultaneously, were landing in Germany for the same reason.

"We asked the Government for help, we started working and we enrolled on training courses", says Ainara meaning that in a situation like theirs the important thing is not to stay still not lifting a finger.

Me and the "other"

The population is decreasing in Spain, because people is leaving. There are now more people forced to lift their roots from the soil where they were born in to try a more prosperous future in a different country. The Spanish dream has modernised itself and lately it puts its eyes outside their borders to survive. This is verified by the INE (Institute of National Statistics) , where a decrease in 48.000 people in Spain in the first half of 2014 is noted.

Thus, little by little the Spaniards have become the inmigrant that, not that far ago, was "annoying" too many in Spain. According to a study of Attitude towards Inmigration from 2012 published by the CIS, 38% of the people asked responded that the number of inmigrants in Spain were "too many". "There are many things you think about them, until you see yourself in the same situation you don't even think that you may have been wrong" Sara excuses herself and recognises feeling now some of the prejudices held in society towards inmigrants when they were living in Spain. "I was a blabber", admits and adds that "one doesn't realise how foreign people are treated in a country until you are in that position". In fact, they highlight how the idea of "the one that comes from abroad comes to steal your job" is refered to the Spanish community in Germany. They describe the region they are in as little sympathetic towards inmigrants and even "dificult". They still find difficult to recognise themselves as inmigrants despite they know they are.

Difficult begginings because "you are not from here"

They remember their begginigs in the country as something "terrible". "Because we were foreginers we had everything denied: you even have problems to ask for the social benefits that the law grants" says Sara as an example, to what Ainara adds "even being Europeans we needed a free movement permit to be able to live here" even when the law that required it was abolished by the European Parliament. Their situation became so extreme that they even went to court.

They relate their beginnings in the same way inmigrants do in Spain: "we started doing the jobs that nobody wanted", says Lázaro. Even today they feel they still don't get on with the German profile. Ainara claims to have heard Germans complaining that 2.500 euros for a single person is not enough money. "They don't understand our worries", says Sara.  "Their visits to Spain are mainly holiday trips to hotels where there the crisis is not so obvious like in other palces".

If anything has helped them in the territory change is forging friendships of very different origins. Now they have a group of friends that integrates from Turkish to Russians, to Colombians, Greeks, and Arabs. No Spaniards. "Culturally we are very different but we like that", explains Ainara. "I'm not going all the way to Germany to hang out only with Spanish people", apostilles Ainara.  Discrimination by skin color is not as obvious as in other countries, but they recognise there is still some.

Besides, they perceive some social inequality among inmigrants. As an example, " the unemployment benefits that we receive from the Government are much more accesible for Turkish people", complains Ainara. "They can include family members in the primer, something that French or Spanish people can't", adds Sara.

Happy ending, but in Spain

Ainara and Sara started together a blindfolded adventure that they want to end in their homeland. Their whereabouts, little has in common with the mix of Indiana Jones and Willy Fog that minister Fátima Ibánez referred to in 2012 about the youngsters that leave Spain, their aim is to achieve an independent life in their country. "I still can't see the way out", says with negativity Ainara. One of the conditions that they establish to go back home in a change in the Government. "I think Podemos should win", jokes Sara, "to take away the Partido Popular and the country to emerge". That is the major premise: an improvement in the country.

They are clear that to go back, they will. They see it as clear as they assumed that 25th October 2012 they were getting into a plane with no return date. It's been almost 3 years as inmigrants in Germany and they recognise that the stay has given them a lot.

With a baggage that not everyone could show off about the two Spaniards will go back home one day. The one of Ainara and Sara is nothing but another story to add to the more than 4.000 emigrations of Spaniards to Germany included by the INE report of the first semester of 2014. In the end, the important thing is for them to come back.