Every year on February 20th, Romania commemorates the abolition of the Romani slavery. But these five centuries in the country's history are still not included in school programmes. On February 20, 2017, a play on slavery created by Romani actress Alina Șerban will be performed in the Bucarest National theater. A first in the country.

When History is forgotten, art can unveil it back again. With the play « Marea Rușine » (« The Great Shame »), 500 years of Romani slavery suddenly reappear on stage. Magda, a young Romani doctoral student, decides to write a thesis on the subject, but is faced with her close friends and family's criticism, along with her own soul-searching : what does it mean to be a Romani woman in today's Romania and in Europe? How can such a history be ignored?

« Magda : I suggest we describe the main characteristics of the Romani slavery in Romania.

Professor : I'm asking you again, why is it so important to you ?

Magda : Because there have been so little research on the subject, I can contribute to expand this area of study.

Professor : Your thesis is too radical. You have to decide whteher you are an academician or an activist. »

Through this character, Romani actress Alina Șerban is determined to bring the past back into light and to question the Romani identity as well as the Romani people's history. According to her, it is essential to know the past in order to understand better the present situation. « Everything that is said about the Romani people is based on the present but no one bothers wondering why such a situation happened. Did these persons have the same opportunities than others? It is essential that Romania and the rest of Europe understand that Romanian Romani's ancesters were slaves, and that the consequences are still visible today. The Great Shame doesn't lie only in this past slavery. The Great shame is to forget the past. » 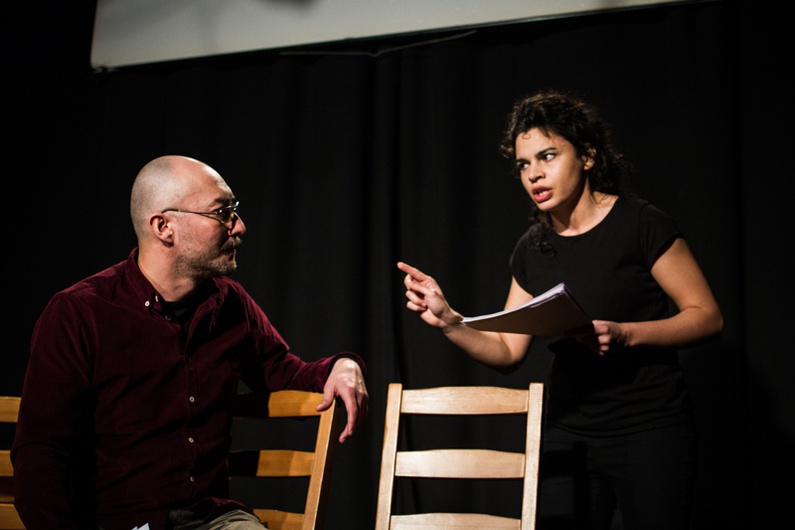 The first part of the play is dedicated to the development of Magda's thesis, and to her  conversation with her brother - an Orthodox priest -, her boyfriend and her professors. In the second part, the young woman and the other characters stage the orals through declamations and they recount the history of Roma slavery till its abolition. In the end, images from the 21st century reveal wrecked Roma houses and evicted inhabitants.

Aline herself has known thoses situations. When he was a teenager, her family was evacuated from the "Roma yard" they lived in. She was then granted a child welfare service and was able to share an appartment with other teenagers. Once she graduated from high school, she went to UNATC, the cinema and theater school in Bucarest. In 2010 came the recognition when Alina obtained a scholarship to go study to New-York and then to the Londons Royal Academy. « I realized how lucky I was to be European, she says. I couldn't work at the time because Romani people were not allowed to, but unlike my Somali friend, I had a passport. I could study and live abroad. I felt free. »

During her stay in New-York, she became friends with African-Americans who told her about their own ancesters, slavery and "white privilege". « It was usual for them to talk about it. They put my thoughts into words, words I had never spoken until then, she says. Romanian Romani have not yet aquired this kind of speech, and yet they have a similar story. We can wonder: who writes History? »

She made some research on her ancestors, generations of spoitori Romani (laundrymen), and wants to reappropriate their history which is her history too. Like the African-Americans, Alina wants to be one of the Romani artists who will remind Romania of its slave past and will contribute to give a voice to the most discriminated ethnical population in Europe.

Several historians compared Romani slavery to that of the African-Americans in the United States. Conditions and context are different but there are some similarities worth stressing. From 14th to 19th century, principalities of Wallachia and Moldavia used Romani slaves. This system will became an institution with its own codes, such as the Drept Țigan, a kind of « black code ». Final abolition of slavery was proclaimed in 1864. Since then, some small things call this otherwise little-known period to mind. The term « Gypsy », which was how the Romani people was called then, was also the word used to name the slaves. Like « nigger », this word, which is pejorative in Romania, is still used to name the Romani. All slaves were not Romani but all Romani - except the freed slaves or the runaways - were slaves, property of the Prince, monastery or boyars, these famous members of the Orthodox democracy in Eastern Europe.

Today slavery's extent seems to be minimized. Even the Romanian language prefers to talk about some kind of servitude (robie) rather than slavery (sclavie). History has no ambiguity. When Mihail Kogalniceanu, Romania's Prime Minister-to-be, tried to raise awareness among his neighbors in 1837, he shed some light on a dark aspect of that time: « Europeans are arganizing philanthropic societies in favor of the abolition of slavery in America, while on their own continent 400 000 Gypsies are held slaves ».

Romanian textbooks do not mention Romani slavery whatsoever. At the very most they mention Romani servitude and its abolition. Yet, the most powerful slave owners, represented by the Church and the State, are starting to finally assuming responsability. February 20, 2011 (day of the first abrogation in 1856) was declared « Romani emancipation Memorial Day ». On February 19, 2016, former Prime Minister Dacian Ciolos officially recognized slavery and the Romani people's marginal situation. On the day after, a memorial plaque was affixed on the Tismana Monastery, one of the first to ever own slaves.

Not knowing about the past prevents from observing its consequences. Research has shown that Romani people were present in Romania at the time of slavery, like in  Simileasca in Buzau. Literature professor Mihaela Mudure writes in an essay called From the Gypsies to the African-America that the post-abolition period was disastrous : « The slaves constituted an economical niche, but they had no political or legal identity. Once freed, they had a political and legal identity but they were rejected to the margin of modern economic life.» She also explains that unlike African-American, Romani people didn't have the opportunity to spread theur culture and their history. That is, until now.

No art, no memory

The issue made its comeback in the public arena in 2015, when Aferim, a Radu Jude's movie, was released. This Romanian western, which won an award at the Berlin International Film Festival, takes place at the beginning of the 19th century and depicts two policemen searching for a runaway slave. For many spectators, this was an eye-opener and a real shock. According to Alina, « dialogue begins», but progress is risky. « It's not that simple to perform at the Nationa Theater, she says. We rent it, this is not a sign that the play's message is appreciated. It was produced thanks to the Romani Cultural Centre– Romano Kher. » Her play had previously been considered too radical by another public theater whose name she won't tell.

Alina will not give up. Se refuses to portray herself as a victim : « Romani people are either rejected or victimized. It's time to let go. It was necessary for me to express painful stories, but only to create something positive, to cause change. Theater and art in general can create this change. » A few years earlier, she would never have dared to set up this project : « As a woman and as a Romani, I wasn't used to occupying space. Some people do it naturally, they say what they want and get it. I want to prove I too am entitled to my own space".  And avoid 500 years of slavery being tossed onto the garbage heap of history.

This report is supported by the Europa scholarship of the Romanian cultural Institute.