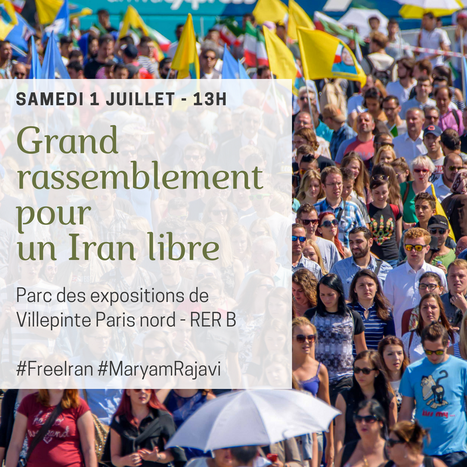 [Eng] 265 Eurodeputies support the Human Rights’ cause in Iran

On the eve of the biggest Iranian opposition gathering, which will take place in Villepinte (near Paris) tomorrow, a majority of European parliamentarians signed a declaration condemning the Human Rights violations in Iran. It is those 265 Eurodeputies, including four vice president of the parliament and twenty-three presidents of parliamentarian commissions and delegations, who send a strong message before Iranians, militants and politic figures from all over the world gather to demand an Iran that should be democratic and free of social, political and economic oppressions exerted by mullahs.

This call takes place after the United States, on the 15th of this month, adopted a draft law that aims to, amongst other things, “fight against the destabilizing measures in Iran”, and to punish the Pasdaran (or Revolutionary Guards) for their support to terrorism in the region. It has been confirmed that Pasdarans trained thousands of militiamen and mercenaries from foreign countries with an ideologic indoctrination then in training camps based in Iran, before sending them to the regions where Iran has mastered the art of meddling into neighboring countries’ affairs – Syria and Irak most notably.

The European deputies’ declaration actually is adamant about having Pasdarans placed on the black list of terrorist organizations. But it also focus on the general state of Human Rights in Iran, notably deploring the use of death penalty and the status of Women’s Rights – even though a few weeks ago the country reelected a president said to be “moderate” and “reformist”, known for his empty promises of appeasement and openness. Finally, the declaration stresses it wants to open people’s eyes and to call upon the United Nations about the slaughter of the political opposition in 1988, which killed over 33 000 people in one summer, not minding the age, sex or even the person’s infraction towards the regime.

The European Union’s parliamentarians weren't the only ones to express their support to the gathering organized by the Iranian’s Resistance National Council, on June 25th. The Italian Parliament published a statement demanding justice for the 1988 slaughter’s victims, considered by many NGOs, including Amnesty International, as a crime against humanity.

The deputies bounced back on this matter’s recent development, especially on the audio files from that period that were unveiled last summer, to ask of their governments that they “firmly condemn 1988’s massacre and impose the stopping of all executions as a condition for any relation with Iran” and “ ask the Office of the United Nations High Commissioner for Human Rights, the Human Rights Council, the General Assembly and the United Nations Security Council to put in their agenda the launch of an international enquiry into this terrible crime and get its perpetrators to justice.”

It is in that same state of mind that, in a video presenting the Eurodeputies’ declaration, Gerard Deprez, president of the “Friends of a Free Iran” at the European Parliament, declares:

« We call upon the Office of the United Nations High Commissioner for Human Rights and the Human Rights Council to install a real investigating commission on the slaughter of these political prisoners.

We also ask the countries part of the European Union to put conditions on the development of their relationships with Iran, like the cessation of  executions and a significant improvement on the situation involving Human Rights.»

«With a goal of voicing our solidarity with the democratic opposition in Iran, I will partake in an Iranian gathering which will take place in Paris on July 1st, where I will present the support of the 265 members of the European Parliament who signed this joint declaration, and we truly wish that the European governments follow our declaration.»