The recent German film ‘Die Fetten Jahre sind vorbei’, also known as ‘The Edukators’, is hitting screens now across Europe. Between politics and threesomes it seems German cinema is experiencing ‘the days of plenty’ 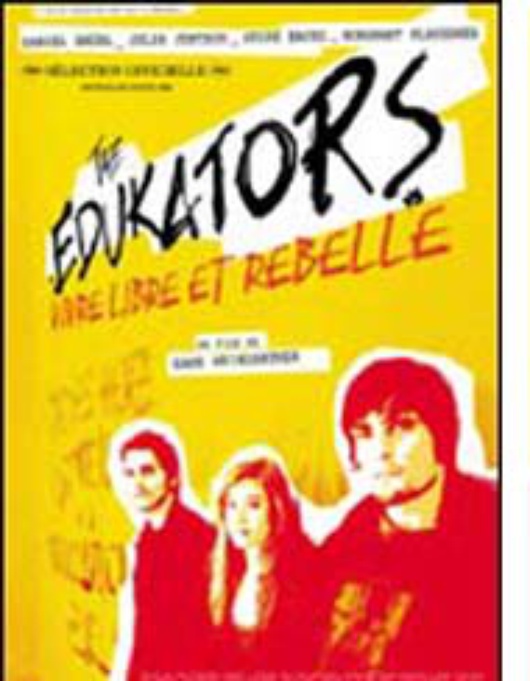 Following in the footsteps of the huge international success ‘Goodbye Lenin', ‘The Edukators’ is another quirky, nostalgic, social satire. The similarities between the two films do not stop there – actors Daniel Brühl and Burghart Klaußner play leading roles in both. The film’s Austrian-born Director and Co-writer, Hans Weingartner, used his own experiences as a political activist in making the ‘The Edukators’, which follows a group of young, would-be political radicals who, in the spirit of ’68, are trying to change society for the better. The quirky plot and highly convincing characters demonstrate the nature of idealist rebellion and non-conformity in today’s society.

The film concentrates on three radical hippies living in Berlin - Jan (Brühl), Peter (Stipe Erceg) and Jule (Julia Jentsch) - who break into the homes of the prosperous bourgeois, rearranging their furniture and leaving messages such as “you have too much money” or “the fat years are over” (the title under which the film was originally released in Germany). The purpose of these non-violent protests is to make the rich reflect on their wealth and to warn them that their “days of plenty are over”. When Jule and Jan are disturbed by Hardenberg (Klaußner), the owner of a house they are in the process of raiding, they are forced to kidnap him, and the three idealists end up in the Austrian Alps, hostage in tow. In hiding, they find the situation out of their depth, and difficulties arise with Jule’s affections for both Peter and Jan, creating a love triangle reminiscent of that in François Truffaut’s masterpiece ‘Jules et Jim’

The real crux of the film is the way the young radicals are brought face to face with the values of the ruling generation – an interesting twist being that Hardenberg reveals that he had been part of the student movements of the 1960s, claiming to sympathise with their beliefs. The political arguments are clichéed and the dialogue sticks to standard criticisms of socialism and conservatism, but anyone who sees this as a fatal flaw in the film is missing the point. It is not supposed to be a weighty political manifesto, but is an intelligent depiction of morality, trust, and friendship. The three activists are naïve, and occasionally individualist whims can conflict with their idealist attitudes, but both they and businessman Hardenberg are likeable characters. Weingartner contrasts the enthusiasm and conviction of the young radicals with the mellow resignation of Hardenberg, who recounts the times when he too was devoted to improving society. The differences between the 1960s and the modern day are also expressed, an example being Jan’s comments to Jule: “The rebellion is difficult now. Before, all it took was dope and long hair, and the establishment was automatically against you…”

The performances in the film are all very effective – with Brühl, Erceg and Jentsch all portraying the ‘angry young man’ (or ‘angry young woman’ in the case of the latter) excellently, while giving each character their own subtle identity. Klaußner also plays his role very successfully, becoming increasingly convincing as the story progresses. The camerawork is largely handheld, adding a sense of intimacy, even desperation, to the film and allowing the audience to engage better with the characters.

Having appeared at Film Festivals in Karlovy, Cinessonne, Warsaw, London, Hamburg and Gothenburg, not to mention being nominated for the prestigious Palme d’Or at Cannes 2004, ‘The Edukators’, which was released in Germany and Switzerland last November, has been highly acclaimed by critics and audiences across Europe. Nevertheless, it is unlikely that the film will see quite as much success as ‘Goodbye Lenin’ (released in 2003) – which picked up awards at the Césars and at the Bavarian, German and European Film Awards, and has been released in around 30 countries worldwide. For those that have not yet encountered this brilliant piece of cinema, ‘Goodbye Lenin’ is a touching satire set in East Berlin in 1990 about a young man (Brühl) trying to make his bed-ridden mother believe that the Berlin Wall has not come down, and that they are still living in communist East Germany (his father, played by Klaußner, having escaped to the west). Along with ‘The Edukators’, both films constitute clever, original works focusing on human relationships, with a political backdrop. However, ‘Goodbye Lenin’ is perhaps more accessible, and the fact that it appealed to the Ostalgia (nostalgia for the former East Germany) movement made it particularly popular. Yet ‘The Edukators’ will still sit firmly among such recent German triumphs as 'Downfall' (Der Untergang) and ‘Run Lola Run’ as an example of Germany’s innovative and popular contributions to contemporary European cinema. The film is being released in other European countries in February and March, and truly deserves to continue enjoying great success.