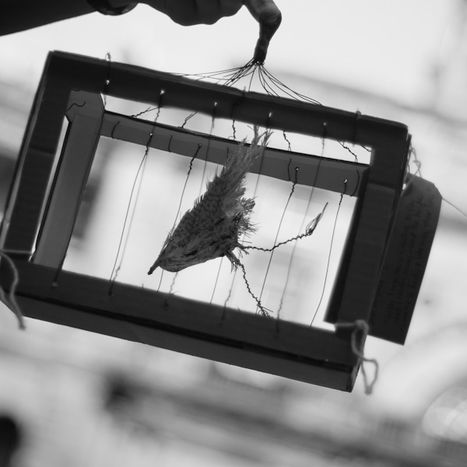 At half past two on 17 August, a crowd gathered in the bookshop at the Edinburgh International Book Festival. They were gazing at a menagerie of intricate paper birds, which had appeared as though by magic out of the crowd. The birds were both a birthday present and the latest step in the unfolding of a long Edinburgh saga

It all started on a cool green morning in March 2011, when a librarian at Edinburgh’s Scottish poetry library discovered a miniature tree, exquisitely crafted from paper and mounted onto a book, on one of the tables in the library. The paper fauna had been left there anonymously, with a note addressed to @byleaveswelive (the library’s twitter account):

It started with your name @byleaveswelive and became a tree.… … We know that a library is so much more than a building full of books… a book is so much more than pages full of words.… This is for you in support of libraries, books, words, ideas….. a gesture (poetic maybe?)

Over the following year, nine more sculpted gifts turned up in unexpected places, now with edition numbers out of ten. A paper dragon cracked its way out of a turquoise egg at the Scottish storytelling centre (accompanied by the wonderful words ‘Once upon a time there was a book and in the book was a nest and in the nest was an egg and in the egg was a dragon and in the dragon was a story…..’). A paper magnifying glass found in the fiction section of Edinburgh central library proclaimed that ‘LIBRARIES ARE EXPEANSIVE’.

Even after sculpture 10/10 ('gloves of bee's fur, cap of the wren's wings', inspired by Norman MacCaig's poem Gifts) appeared, once more in the Scottish poetry library, unexpected paper gifts continued to delight the Scottish public. Visitors to the Edinburgh international book festival in 2012 found paper roses scattered around the festival grounds - and book week Scotland in the autumn saw a nation-wide, week long treasure hunt for the gifted goods. More recently, three paper eggs were treasured by the Scottish poetry library in the spring of 2013, and as the weather got warmer a traveling trunk arrived at the City of Literature.

The suitcase came with a message - that anyone interested in watching the saga unfold should follow @_freetofly_ on twitter. Over the coming weeks in a wonderful demonstration of how new technology really can unite people, readers across Scotland and beyond gathered via @_freetofly_ and exchanged favourate books, building a virtual library and shouting about why literacy is freedom. As the festivals in Edinburgh got under way in August there was a flurry of activity, hints of feathers and whispers of words. Finally, on 16 August, the still anonymous @_freetofly_ announced that birds would be landing at the book festival the next day at 2.30, and would be waiting to be liberated.

Which brings us to the afternoon of the 17 August, as bloggers, photographers and bookworms lurked in the festival's bookshop, not so much drawn by the idea of a scoop as excited as children at this literary Father Christmas, this secret giving of beautiful things. Sure enough, as the second hands of our watches ticked towards half past, some of the book festival employees entered in a bustle of movement, carrying what looked like blue rubbish bags - and within moments thirty caged paper birds were adorning the centre of the book shop. 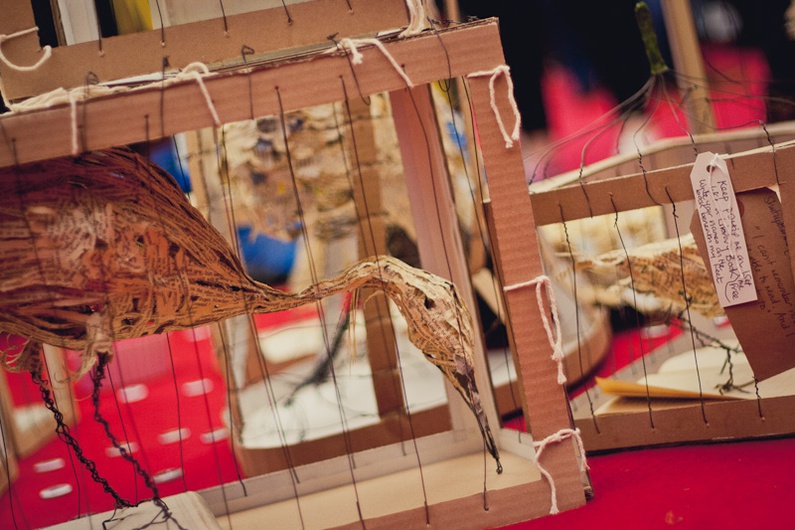 Three of the largest birds were gifted to the book festival itself, including a sculpture of a crow in memory of the much loved Scottish author Iain Banks who died suddenly in May 2013. One other sculpture was dedicated to the Guardian newsaper, which sponsors much of the book festival. 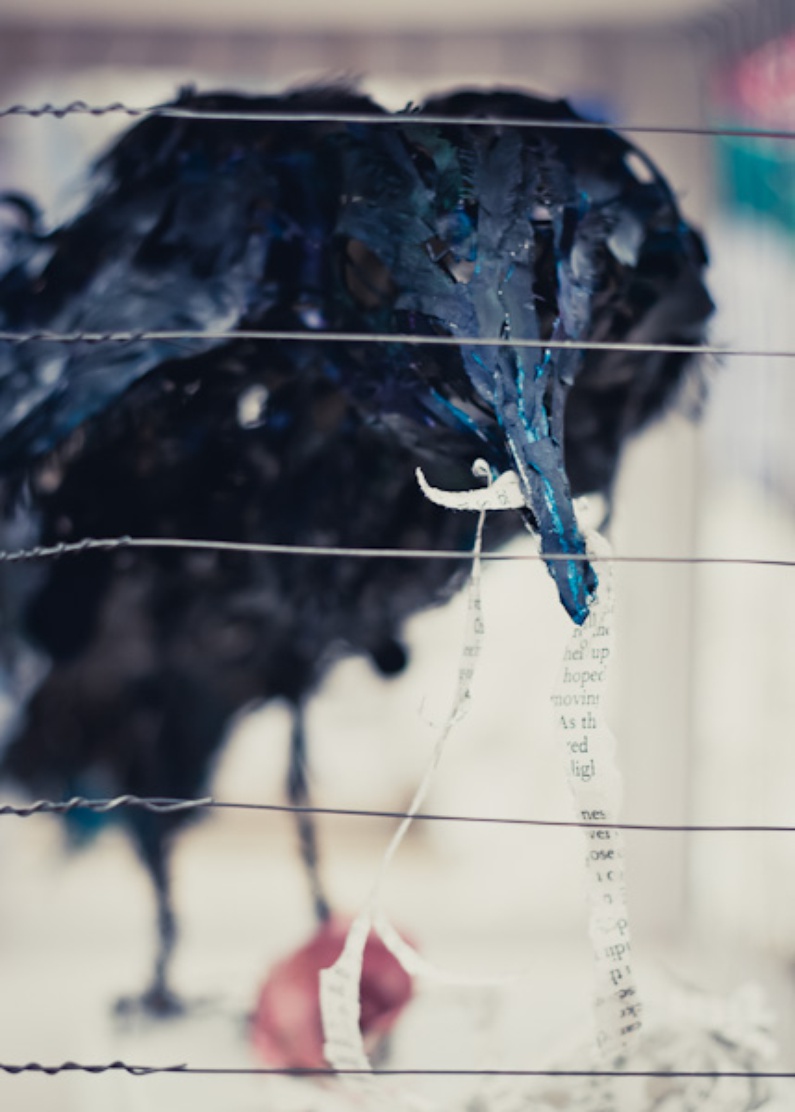 The remaining 26, however, were smaller - robins, blackbirds, thrushes, waders. 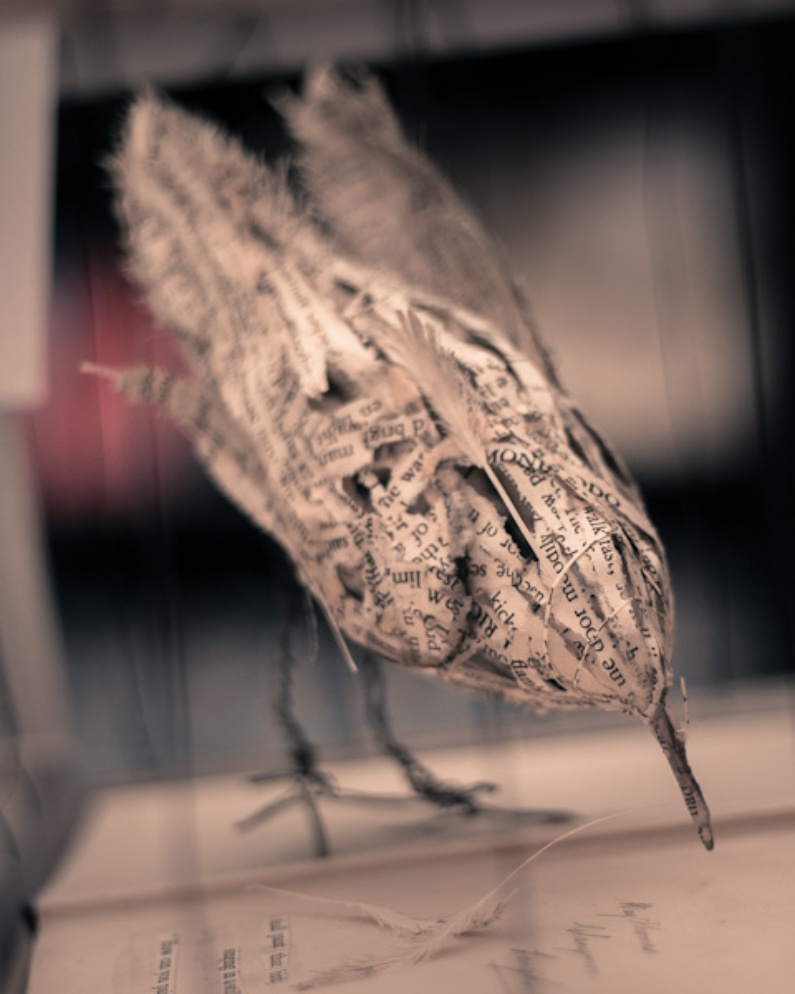 All of them carried a quote from one of the many readers who had helped @_freetofly_ build her virtual library - reminding us why books matter. 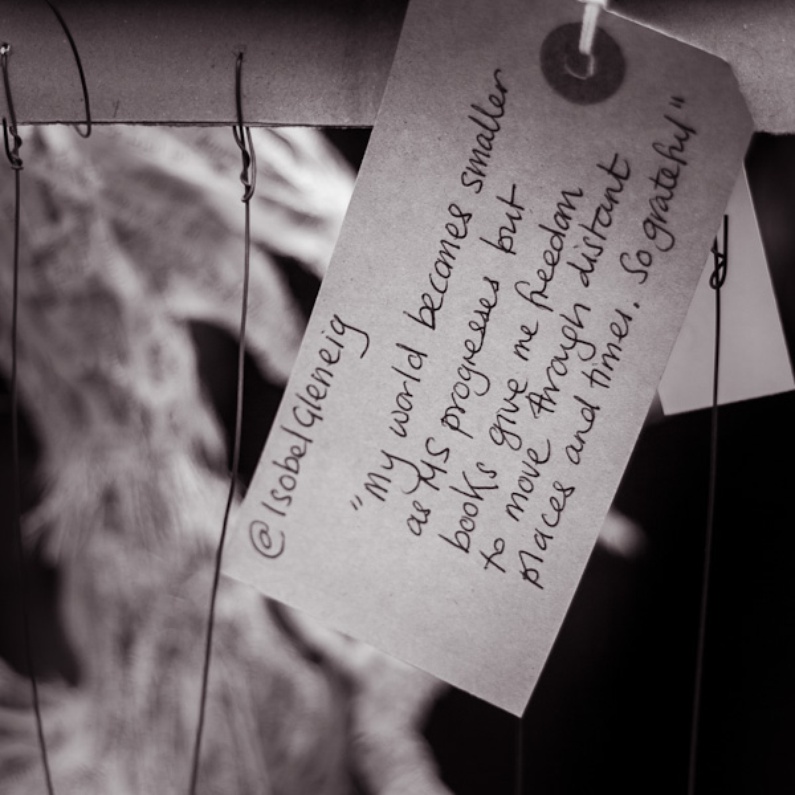 These garden birds were there for the taking, so long as their new owners followed the instructions on their labels. The birds were to be set free from their cages - and left behind, depending on the instructions, in favourite cafes, libraries, bookshops. 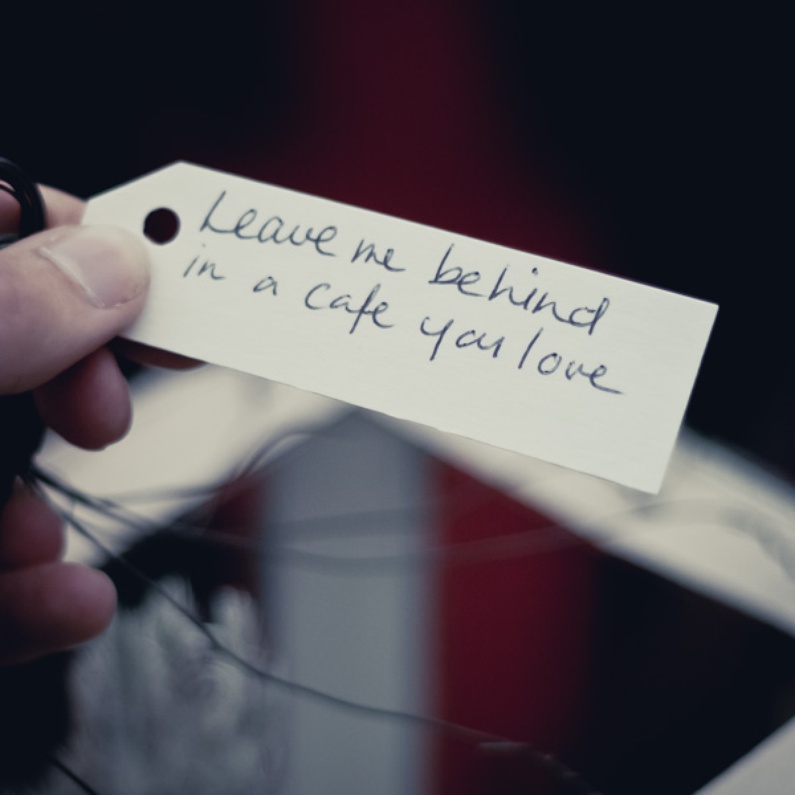 Which is why I left Charlotte Square that sun-struck afternoon clutching a caged bird tightly to my chest, and mulling over where I had last had a really good cup of coffee. That bird still had quite an odyssey to go, before it could comfortably put its head under its wings. But that, my friends, is a story for another night.