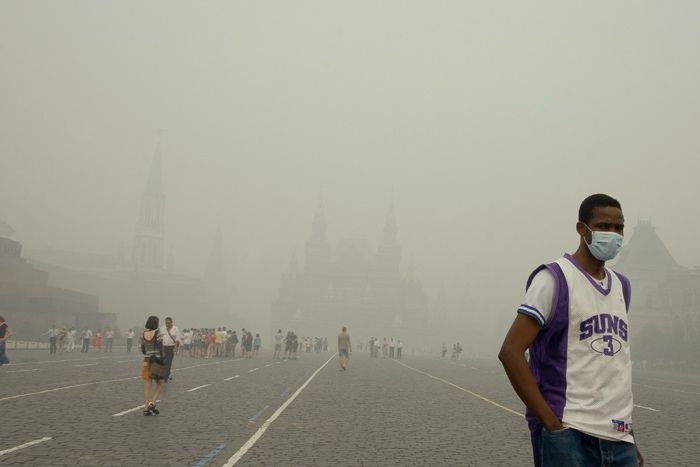 Dym and dozhd: useful vocabulary for a smog summer in Moscow

Two words have been used more than any others in Moscow this summer. The smoke that has been periodically engulfing Moscow from over 500 wildfires burning across Central Russia for the past few weeks, and the long-awaited rain. Today, the city resembles a scene from a zombie film; it'll be like this until mid-August, forecasters say

The high rise soviet-era apartment blocks across the road from my flat in the Novoslobodskaya area of the Russian capital are only just visible; great bulking dark objects in the haze. Health officials are advising people to spend as little time as possible outdoors, but the smoke is slowly creeping into flats, offices and even the metro, which in places lies 80 metres underground. In their fear, many people are putting wider connotations on the dreaded dym (дым), or smoke, with talk of the effects of global warming and even the apocalypse. 50 have died; the orthodox church has claimed it is God’s punishment for the sins of Russians and advised people to pray for forgiveness.

The second word is dozhd(дождь), or rain. After almost two months of scorching heat and very little precipitation, Muscovites have begun to talk of rain in the same way as people talk of sunshine in many parts of northern Europe; with an air of awe and longing. It is, after all, the only real solution to both the unbearable heat and the 'dym', not to mention the drought that has destroyed crops spanning an area the size of Portugal. 'Dozhd' even makes it onto the top ten Trending Topics list on Twitter at the end of July. Meanwhile, weather forecasters predict the heat wave will continue until at least mid-August. There is hope that after that the rainy season, which usually begins in August, will finally kick in. If not, at least we only have to wait a few more months until the snow starts falling and temperatures drop to minus 30 - like last winter.

Are you in Moscow, or know someone in Russia right now? Comments are open below