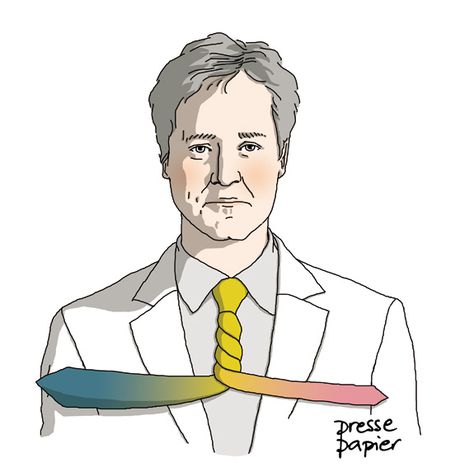 On 12 May, conservative and liberal democrat heads David and Nick officially stood outside No. 10 Downing Street to present themselves as the leaders of the coalition in Great Britain. Clegg has said we need to get used to a 'new kind of government', which will not be moving closer to Europe. The EU press reacts

Tory leader David Cameron is the new British prime minister and will form a coalition government with the liberal democrats. Nick Clegg becomes deputy prime minister with four more ministers in the cabinet. In exchange Cameron has offered to hold a referendum on the majority voting system, which has so far put smaller parties at a disadvantage. The country is on the threshold of a new era, writes the European press.

Tory leader David Cameron's agreement to reform the electoral system could have historic consequences for the British political system, writes the left-liberal daily: 'Cameron clearly concluded that a change of government is worth a major sacrifice. Hopefully his offer is based on the insight that there are more important things at stake, such as building a government based on a solid majority. The paradox is that although voters may have been rather unclear., the 2010 elections could nevertheless go down in history as a watershed in British politics. When Gordon Brown took office as successor to Tony Blair in 2007 and became embroiled a year later in a major financial crisis, the idea was no doubt far from his mind that his departure would have greater consequences than all of his decisions as chancellor of the exchequer and prime minister'

The head of the British liberal democrats, Nick Clegg, has pushed through his demand for a reform of the majority voting system perfectly, writes the daily: 'Certainly, Clegg's demand for a change in the electoral system had the support of the public and the media, but he had to act with caution and political tact. Above all he had to avoid prolonging the coalition talks because the British are used to quick changes in government and political stability. Clegg was on thin ice. If he had overstretched the negotiations and failed to achieve a coalition, the window that opened after the elections for him and his party - with the possibility of a reform of the British electoral system - would have closed again for a long time' (Veso Stojanov)

If David Cameron plays his cards right, his decision to form a coalition with the liberal democrats will change British politics forever, writes the conservative daily: 'The liberal democrats have been picked up and put down in a different place, partly by Nick Clegg of course, but largely by a Cameron offer of partnership that they weren't expecting. The anti-conservative majority is, in an extraordinary political coup, no longer an anti-conservative majority. Cameron has the potential to lift himself and the party above normal partisan politics. He can become a national leader, his party seen as broader, more generous, more capable of listening and of compromise. The very fact of working with a coalition partner might force conservatives to sound more moderate and less strident. The tories will be able to share the political price of the difficult decisions ahead with another political force' (Daniel Finkelstein)

Read more from 'Cameron’s daring will change politics for ever' on The Times, UK

If the British coalition government came together so quickly it's thanks to the financial crisis in Europe, writes the conservative daily: 'Fears that markets may lose confidence in view of a highly indebted state were endlessly fanned by the media, interest groups and conservative politicians, and were a driving force behind the agreement. And indeed, on Tuesday as well all eyes were on the markets. These however remained remarkably cool-headed during the dramatic and uncertain process of government building. The liberal democrats achieved more than they could have expected from the negotiations in view of their disappointing results at the polls. Nevertheless their key hope remains unfulfilled. The coalition will not adopt the system of proportional representation, which would give smaller parties fair representation in the house of commons. The only concession they could wrench from the Tories is a referendum on modifying the majority voting system'