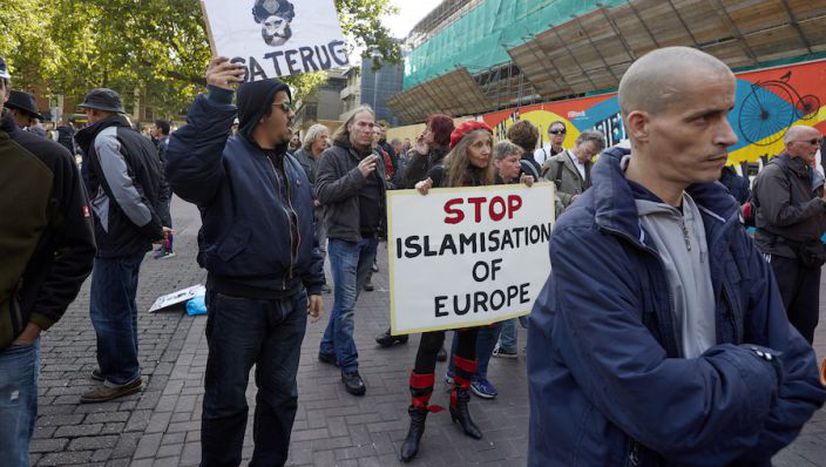 My Turkish friend urged me to write an article about the recent Pegida demonstrations in The Netherlands. The news about how Pegida leader, Edwin Utrecht, encourages his fellow Dutch man to stop eating kebab and boycott Turkey as a holiday destination reached all the way to Turkey. Who is Pegida and what do they want to accomplish?

Pegida fights the Islamization of Europe

To ask the people of your country to stop eating kebab and no longer visit Turkey for holiday, are absurd requests. Unfortunately, I am no longer surprised about anything anymore. 'Aren’t the Dutch supposed to be super open-minded people?', my friend asked me. Until recently, I thought so too, but things have changed. The economic crisis of some years ago and the current ‘refugee crisis’ (as Western politicians like to call it) have instilled fear and insecurity among western Europeans. Dutch Pegida supporters seem to be angry and afraid of anything and everything, but above all, they fear extremism and the Islamization of Europe. The organization ‘Patriotic Europeans Against the Islamisation of the West’, originally founded in Germany as ‘Patriotische Europäer gegen die Islamisierung des Abendlandes’, or Pegida, is an anti-Islamic movement. They organize weekly demonstrations against what it considers ‘the Islamization of Europe’, calling for more restrictive immigration rules, particularly for Muslims. Their number of followers exploded in the past year.

Their first meeting, on October 14th last year in Dresden, only attracted a handful of people. The second gathering already had hundreds of people and now thousands of supporters are present at the weekly protests of Pegida in Germany. Two months ago, a Dutch branch of Pegida came into existence. Also in The Netherlands, the group gained immense popularity very fast. Their Facebook page has over a 11.300 likes and is growing by the minute. On the page you can read angry comments that criticize the government. ‘The Netherlands is no longer a democracy, we have a left extremist dictatorship’, claims one of the commenters. The main reason for this statement is that the Dutch government is letting in refugees, without the approval of the people. The refugees are believed to be all radical Muslims, that will undoubtedly come to attack us. One of the commenters, about Islamic people: ‘These people had its chances in Europe. They fail to adapt and rob, murder and rape. They impose their will on us. You should do what THEY say, it is simply in the genes of these people. I never had such strong thoughts, but I have bleak picture of the future if we will let in more of these rats.’ You will not be surprised, if I say that the majority of Pegida followers don’t want any refugees to enter The Netherlands and wish for the borders to be closed. To express their anger and concern, Pegida members organized their first meeting, a little over a month ago. About 150 people showed up, the majority of them were men. Their signs read slogans such as ‘Islamization = EU-thanasia’ and ‘Koran is poison’. During a speech, leader of Pegida Edwin Utrecht asks to stop eat kebab and no longer visit Turkey as a holiday destination.

So far Pegida has especially grown in Germany, but this may change soon as Islamophobia is getting bigger in The Netherlands as well. The biggest problem is that established parties and the media are portraying Islam as the root of many problems within the society. According to Peyman Jafari, a Dutch historian and political scientist, it is not immigration that leads to all sorts of misery within the society. In many impoverished European neighborhoods, districts are deteriorating while the number of immigrants is increasing. However, this decline is not caused by the arrival of new cultures, but by the fact that budgets for social services and community centers have been cut by neoliberal policies. Also, unemployment rates among the less educated have increased, he says. Influencial politicians and journalists have contributed to the growth of Islamophobia by framing problems in a cultural context.

Pegida says to be against Islam as a religion and to fight extremism. But when you accuse any Muslim of being a violent extremist, it shows that there lurks lots of xenophobia within the movement. I am happy to say, however, that also demonstrations against Pegida have taken place. As Peyman Jafari stated, this shows that also the politics of hope exists, contrary to the politics of hatred and fear. It is our responsibility to stand up against all forms of intolerance and discrimination.