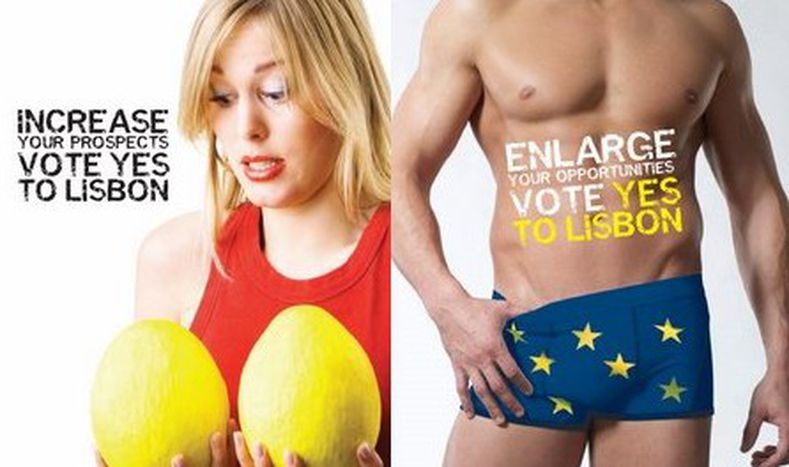 Will Ireland vote no in a referendum on 12 June? It is the only European public to voice its doubts about the Lisbon treaty, which has been  ratified by fifteen EU member states and needs the remaining twelve votes to work

The city centre is silent, except for the early morning rubbish trucks trundling down the streets. The inhabitants are stirring slowly in rows of identical modern apartments. The dawn breeze rustles the row of blue and yellow-starred flags that stand across the River Liffey. This is Dublin on 23 May, the morning after the Eurovision semi-finals that took place in Belgrade. Delivery vans move slowly around the city's commuter belts, delivering stacks of daily papers to neon lit petrol stations. 'COLD TURKEY FOR DUSTIN AFTER ELIMINATION', reads the headline of The Irish Times, after Ireland's Eurovision representative, a hand puppet, was kicked out of the competition. 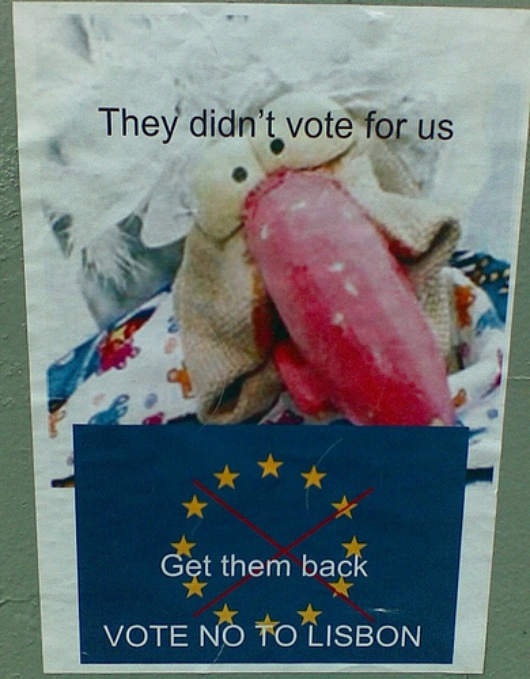 Some laud the turkey for showing up Eurovision for being a farcical, purposeless contest that spends far too much money on nothing but confirming historical bias and showy displays of national pride. Others are embarrassed that we had shown ourselves up on a European stage, and made a mockery of a competition that we once thrived in. Many are apathetic. 'Who cares?' they think, hitting snooze on their alarm clocks and rolling over in bed.

Talking turkey: yes or no?

On 12 June the country wakes to a greater contest. The Irish public will register their own opinion of the Lisbon treaty, a document which will amend the legal basis on which the EU was founded. Amongst a variety of changes it will give more power to the national parliament, change the voting structure in the council of ministers, reduce the size of the European commission and introduce a high representative for foreign affairs. Signed in Portugal by European leaders in December 2007, it is undergoing a process of ratification across the 27 EU member states. On 29 May, Luxembourg became the fifteenth member to do so.

Many Irish voters are children of the nineties and noughties, the Celtic Tiger teens who have no memory of the dole queues of the eighties and the drudgery of the seventies. Self assured and somewhat cocky, many feel that we no longer need Europe. The torch of the rising star can be passed eastwards, to the newer member states who still have to take Eurovision seriously. Others believe it is this purely for this reason that we should vote 'yes'. The EU has made Ireland what it is today. A no vote would simply mock the millions of euros of structural funds that have been poured into the country. Never mind the thousands of Poles who have flowed in to further support our economy. Many more, including the young, simply don't care, even with sexy campaigns like rockthevote.ie and raunchy posters from the youth wing of one of the largest parties, Fianna Gael. 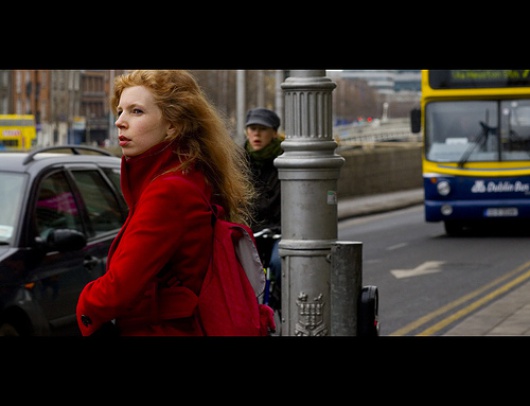 Back in Dublin, Grace O'Malley is doing some final cramming before her end-of-year-exams at University College Dublin. 'My understanding of the Lisbon treaty is fairly limited,' she admits, looking up from her textbooks. 'If we vote yes, we'll be giving more power to Europe and less to Ireland.' A 'No Campaign' poster glints brightly in the sunshine behind her, reading 'The New EU won't see you, won't hear you, won't speak for you - VOTE NO.' 'I understand the treaty. I'll be voting yes,' smiles Claire Davis across town, on her way to work. 'Ireland's dramatic changes in the last ten to fiteen years have gained world wide recognition - from securing a nation at peace to creating a vibrant and competitive economy. Ireland's political, academic and business leaders have a vital role to play in carving out better policies and activities for the EU.' Co-worker Jeff Donohoe is not as convinced. 'Even with the Celtic Tiger economy behind us, Ireland is still a small fish in the large European pond. Do not let the cranes in the skyline delude you of Ireland's footprint on Europe as a whole.'

Second year student Marie Laffey is examining a leaflet about the treaty when I ask her what she thinks Ireland can bring to the EU. 'Oh God, I don't know - potatoes?!' she laughs, admitting her chances of reading the leaflet are 'slim to none'. She plans not to vote. 'I'm afraid I don't know anything about it,' she replies honestly. Most people don't reply. You get the feeling people are confused, and afraid of sounding stupid. Working in the European commission in Brussels, Irish graduate Anja Friedrich is better informed than most. 'I can't fly home, but I'll be keeping my ear to the ground to hear what happens,' she smiles. 'At least with Dustin in the Eurovision we could count on other countries booing him out for bad taste - let's hope that won't happen to us!'