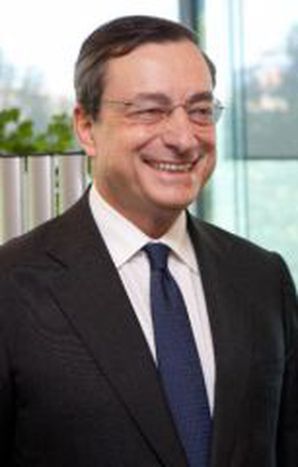 Dungeons and “Draghions”: the EU summit appoints the new President of the European Central Bank

by Joan Manuel Lanfranco Pari European Council meetings are like the dungeons of EU decision-making. Excluding physical violence, some parallelism can be drawn. There are important security measures, discussions take place behind closed doors, and some leaders are “punished” because of an erred or out-of-the-script socio-economic performance.

Rarely a verbatim of such discussions will be published, so a possible solution to satisfy one’s curiosity could be to become an EU Head of State or Government. Unlike a dark and dank dungeon, however, post-Summit press conferences depict polite and consensual statements: “after constructive dialogue, EU leaders agreed upon…”, and other similar neatly prepared phrases.

Very discretely in the agenda of the Summit, after bold issues like Greece’s economic situation, EU borders and immigration and Croatia’s accession, the EU leaders appointed the new President of the European Central Bank (ECB). The winning candidate (actually the only candidate) to replace the French national Jean-Claude Trichet, is the Italian national Mario Draghi, current governor of the Bank of Italy.

Ahead of the Summit, the European Parliament gave its approval on the nomination of Mr Draghi as ECB President. This was merely a gesture, since the EP has no real say in this appointment. Nevertheless, the increased power of the EP since the last EU treaty change makes this “blessing” necessary, given the role of the EP in the formulation and implementation of measures of economic governance in the EU. The main obstacle to Draghi’s appointment came with the objection raised by France, to the fact that it would mean that two Italian nationals would be sitting on the ECB Executive Board (Lorenzo Bini Smaghi is a member of the ECB’s board of management until 2013), an exception since the creation of the institution. That is why hours before of the Summit, there was doubt whether or not France would block Draghi’s appointment.

In the light of the announcement on European Council President Herman Van Rompuy’s Twitter, it seems EU leaders found a way through. Apparently, Mr Bini Smaghi will step down from the ECB’s Executive Board before the end of 2011, possibly in exchange of Draghi’s current position at the Bank of Italy. Still, other candidates are more likely to get that job. Draghi’s appointment will therefore cause some turmoil in Italian internal politics.

In times of socio-economic crisis in the EU, particularly in the cases of Greece, Ireland, Portugal and Spain, Mr Draghi will be the Euro-dragon attempting to control inflation, to guarantee the survival of the Eurozone, and ultimately trigger growth and jobs. Several sources believe that he will continue with Trichet’s working style. Finally, there is consensus that continuation and predictability of the Euro’s monetary policy is needed to find a way out of the economic crisis.