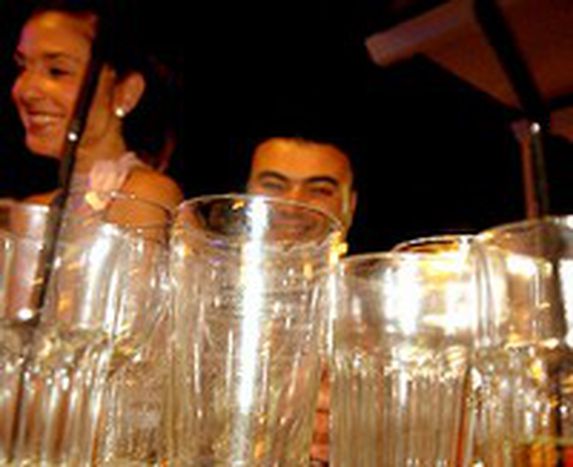 The youth of Britain appears to be permanently drunk. The government is trying to create a European drinking culture in the UK – they face an uphill struggle

In London, people don’t just work hard, they play hard, and a frenetic week at the office is soon followed by a boisterous Saturday night of drinking and dancing. A study by the Institute of Alcohol Studies shows that Great Britain sits in third place behind Ireland and Denmark where binge-drinking youths are concerned.

Before the second World War young people were the sector of society that consumed the least alcohol. Youth drinking only really started in the 60’s. However, between the 60’s and the 80’s 18-24 year olds were transformed from teetotal juice drinkers to the heaviest alcohol consumers in British society.

The trend continues today. Despite its obviousness, the reasons for the phenomenon are varied. Drinking has a social element; meeting up with friends, going out together and having fun all involve drinking. "Getting drunk is common here, particularly Fridays after work" said Begona Pique Bernado, a 23 year old Spanish woman who has been living in London for a few months. With the help of alcohol young people seem able to overcome insecurities and finally relax. Everything seems a lot easier after a couple of drinks.

The British government is trying to put an end to this pattern. Their strategy in the fight against alcohol is summarised in the Alcohol Misuse Enforcement document put forward in 2004. The government highlighted the consequences of alcohol abuse through television advertising and bill-board publicity. Throwing up in a public place following a heavy alcohol binge now results in a £80 fine. However, how much influence the government can have is questionable, as most minors drink in the home and therefore elude all restrictions.

It's not just the quantity of alcoholic drinks as such that has come under fire in great Britain, but instead the drinking culture as a whole. The image of scantily clad English women and their puking male compatriots if often a shock for foreigners. "In my country no one would ever simply leave their friends behind because they are drunk, which is often happens in England" said Silvia Garrido, a 26 year old Mexican woman who works as a financial advisor in London.

A lot of wine and beer is also drunk in Europe's Mediterranean countries, though often as an accompaniment to food. Moreover, pubs and clubs are now open longer hours, which means people don't hastily get drunk in a short period of time. For this reason the British government tried to get to grips with the alcohol problem two years ago when it was made possible for pubs to stay open later than 11 o'clock. However this change was only adopted by a small number of pubs.

Emilie Rapley, the Research & Public Affairs Officer of the Institute of Alcohol Studies does not believe that this new law will have an positve outcome: "One the main criticism made about the laws, and this is the view supported by the entire academic community, is that the new Licensing Act (and what it promises) is not only completely biased, in that it only serves the interests of the alcohol industry; it is also based on no scientific evidence whatsoever. In fact, all the scientific evidence shows that extending hours of sale does not result in a decrease in alcohol consumption, or a reduction in alcohol related crime and disorder."

The economic, social and health consequences of binge drinking present serious long term problems and they represent a challenge to the welfare state. Although Britons spend a lot of money on alcohol and therefore boost the food and drink industry, expenditure for medical treatment and policing is very high. According to a Home Office report in 2003 absenteeism from work due to alcohol consumption costs employers £6.5 billion a year and damage as a result of vandalism costs the country £7.5 billion each year.

It remains to be seen whether the government's new campaign will have an effect. An investigation showed that those young people who drink very heavily are also the most susceptible to other drugs that are not legally attainable. Britain’s drinking problem seems set to continue.