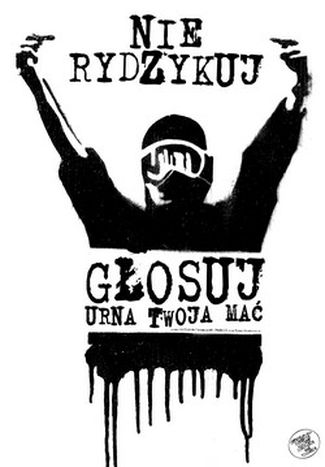 A campaign to encourage Polish people’s participation in the election is well on its way. Its last hit is a poster by Robert Florczak and Jacek Staniszewski, a famous visual artist: Don’t rydzysk it. Vote. For the voting booth’s sake (a pun on words almost impossible to translate into any other language, hinting that Rydzyk, the controversial Catholic priest, might get to power unless more people participate in the upcoming elections).

A vast majority of western European countries come top of the list in international comparisons of voter turnout. Unfortunately, in eastern European countries, Poland being no exception, voter turnout rarely exceeds 50%. In the discussion about the success of PIS (the currently governing conservative party) the argument was frequently made that young Poles living abroad often had difficulty voting. According to a variety of estimates, between 600, 000 and 2 million Poles left their motherland in the past few years. Their voices could significantly affect the outcome of elections.

Which Poles can vote?

The rules for Polish people to vote abroad are clear and easy. Anybody who is 18 and over on the day of elections, has a valid Polish passport and has not lost his right to vote by a valid ruling of the court can participate.

The one requirement that all eligible voters must meet is to sign in to the registry of voters, which are prepared by consulates abroad. In many European countries, for example in Great Britain and France, it is possible to sign in electronically. Tomasz Sergiejuk, 23, currently working in London, is content about the way elections are organised abroad: 'There is no problem at all. There is a consulate and an embassy, and you can cast your ballot in both. Registration online happens quite smoothly.'

20-year-old Asia Bronowicka, currently studying abroad at Sciences Po, Paris, reminds us that other means exist in places where it is not possible to register electronically: 'You can register using fax or telephone or by personally visiting the consulate; you only have to provide all of your basic personal information.' But 'basic personal information' is not as basic as the word may imply. In the registration form you must list the following: your first, middle and last name, father 's name, date of birth, place of residence and a valid passport number, with the place and date of its issue. If you will use the form in a country to which it is possible to travel using only the Polish national identity card, you can provide information from that document (its serial number, number and the place and date of its issue).

In general, access to designated voting places is not a problem. In the United Kingdom alone there are eighteen voting areas. Unfortunately for the 100, 000 Polish people officially residing in London (unofficially there are about five times that number!), there are only two voting places there. Since a big crowd and heated atmosphere is expected, it is better to cast your ballot in the UK capital sooner rather than later.

What if we could vote via Internet…?

Many Polish people abroad consider the voting process too complicated. 22 year old Robert Kowalski, a graduate of the London School of Economics in London says: 'I plan to vote, even though the registration procedure is a bit too bureaucratic. Participation in elections would be much easier and a much better voter turnout if it was possible to vote via Internet, like it is possible in Switzerland, France and Estonia.' The latter is the European pioneer of e-voting. In the 2007 parliamentary elections it was possible for a few days in February by casting a ballot online. 30, 275 Estonians chose to vote via Internet.

Even though in Poland e-voting is a long way ahead, the European Union is seriously considering such a solution. A programme called EU CyberVote kicked off in 2000, the objective being to demonstrate 'fully verifiable on-line elections guaranteeing absolute privacy of the votes and using fixed and mobile Internet terminals.' Until now the tests, which did not give satisfactory results, were conducted in Sweden, France and Germany.

The last day to register for the elections is 16th of October 2007!