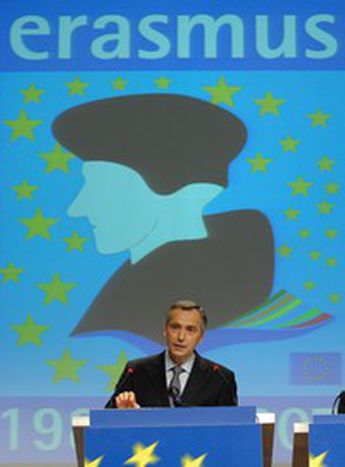 Integration must happen in-situ, with your neighbours - not with Brussels, says Slovak Ján Figel', European Commissioner for Education, Training and Culture

'Life is change. Europe is a moving target.' Ján Figel', 47, has been in post since the end of 2004. He stresses civilian responsibility for creating Europe, since 'Europe won't change without her 500 million citizens.'

Strengthening the Bologna process (the reform process for European higher education), and improving school and university systems are some of the good moves that Figel' has made as Commissioner. The budget for the Erasmus programme is due to triple from 1 billion Euros for the last 6 years to 3 billion Euros for the next 7 years. 'Universities were closed in the era of totalitarian regimes. We mustn't forget this important history lesson, so we can reconnect with the Europe of invention and Renaissance, that of openness to knowledge.'

Language learning is also on the menu. 'It's the EU's different political cultures that create its richness. It's like a 27-piece mosaic.' Slovakia's relationship with Europe might be easy, but that hasn't traditionally been the case for the very sceptical Czech Republic. 'But it's essential that both countries are at the table, taking part in discussions and trusting one another.'

Between 1998 and 2003, Figel' acted as Chief Negotiator for his native Slovakia's EU accession negotiations. He calls it a 'piece of history that isn't repeated. Negotiations were difficult, unforgettable.' Unlike her Czech, Polish and Hungarian neighbours, Bratislava wasn't chosen in 1998 to join the European club because of insufficient protection of minority groups.

Slovakia came out of 'semi-isolation' - 'a situation Serbia suffers from today' - when she was invited to Helsinki in 1999. Joining other former Communist nations was a guarantee of the state's maturity rather than a change of ideals. 'Integration must happen in-situ, and with your neighbours - not with Brussels,' recommends Figel'.

However, today's Europe of 27 member states has reached the limits of the institutional process; no more countries can join the union. The decision-making process set in place in Nice is, according to Figel', 'like an overly-tight pair of trousers.'

The Germans current initiative to salvage the constitution during their presidency is all the more symbolic. A founding father of the EU, Germany's reunification was a basis for the EU's enlargement to Eastern Europe. 'The European Union is not limited to Brussels,' reaffirms the Commissioner. 'It's not just a feeling. It's the conscious creation of Europe that counts. The European Union isn't a small entity in space. It is a group of 500 million free people who are growing together, and not without questions and fear. Europe is a Tower of Babel. If we look back over 50 years we see a success story. We mustn't be afraid of the Polish plumber - we need him.'

Translated from « On a besoin du plombier polonais »