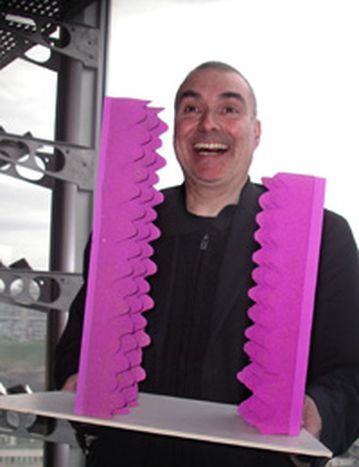 Dominique Perrault: much more than an architect

The train passes in front of the imposing form of the Bibliothèque François Mitterrand as it winds its way towards the suburbs. Clouds reflect in the glass office facades of the architect who drew the designs, Dominique Perrault. Entrance A, seventh floor. As the lift goes up, Paris appears, throbbing with life amid lines of cars, trains and construction sites. As we step into the office of open space, we are confronted with dozens of tables covered with paper and computers.

Born to be an architect?

Dominique Perrault is dressed all in black and sports a two-day salt and pepper beard. We sit down in a large room flecked with rays from the late midday sun. “I started with nothing and have not arrived anywhere,” he immediately explains. “I never wanted to be an architect. Today even less than I did before. Architects who have such an ambition rarely become architects. However, those who do not wish to become architects become something much greater. For myself, I wanted to be an artist.” He told me that when he was young he had a great passion for painting. “An art based on gesture, a violent art: rags soaked in paint on waxed canvasses.” With a hint of irony underlying his regret, he explains that his parents wanted him to learn a craft. “Architecture is a trade that takes a long time to learn, it is tough, it is hard – it did not allow me to follow my passion for painting.”

Break on through to the other side

As we talk, Paris continues to move under our feet. Perrault tries to explain to me what he means by aller au-delà, to go beyond. “Today, architecture is really structured and reductive. Architects are interested in architecture. That is not for me. I am interested in landscapes, and in the creation of a new conception of nature. An artificial nature, with trees of course, but with constructed trees. Think of a landscape as if it was a building, in which we construct streets, houses, gardens, mountains… in which people live, dwell and sleep.” Is Paris such a landscape? Perrault does not bite his tongue. “Paris is a city for tourists. It is no longer the most important city in the world. Today, Grenoble, Lyon, Nantes and Lille are the most interesting towns, because they are in the middle of radical transformations. The future of France is in its provinces, not in Paris.”

Conception is a slow process

But in the end, what is a project? “A project is a conceptual process, an attitude that evolves, contradicts itself, modifies itself, adapts and then transforms itself. And I find that extraordinary. The course of this process involves politics, economics, but also questions of functionality, experience and aesthetics.”

Perrault’s work can be found in most major cities, but the velodrome and swimming pool in Berlin are, according to him, his manifesto. “These buildings will remain a part of the history of architecture, capable of creating a place beyond itself. This is not an architecture that takes its place within the history of the discipline, but something that will create a whole series of new histories.”

Perrault as certainly left his mark on Paris. In 1989 he started working on the National Library of France (BnF).

Mitterrand, the president of France during the 80’s, chose Perrault for the project. “Mitterand imagined the transformation of a society through its architecture. He had a really historical vision of architecture, where knowledge was embodied in a society’s buildings. Personally, I see architecture more as a territory, a geography.”

Before he undertook the BnF commission, the grand architectural projects of recent French history – the pyramid at the Louvre, the arc of the Defence (a large office complex on the outskirts of Paris), and the circular building of the Opera Bastille - were archetypes, based on geometric shapes. “The national library is the opposite – it is an empty project, an abstract project. It is a place which functions more as a conceptual space. The library creates a territory – a new possibility of space, whereas the pyramid at the Louvre stands testament to a history.”

The working day of Dominique Perrault starts when the sun rises and finishes when it sets. But is it true that with projects all over the world, his work never quite stops. “At all moments of the day and night I have projects going on around the world,’ he comments, ‘it is incredible. This is modern society!” At the moment he is working on the European Court of Justice in Luxemburg, the Marjinsky theatre in Saint Petersburg, the Olympic tennis centre in Madrid and a university in South Korea. But Perrault has yet to build a museum. “It is important neither where I build it, nor for what purpose. But I always arrive second in competitions to build museums.”

Towards a European architecture

”A European architecture exists,” he states with conviction. “Every country in the process of development is trying to build a European architecture, something that will make people dream.” What is this European architecture? “Conformist, bourgeois, small and comfortable – like me!” he claims and bursts out laughing again. I leave his office, fascinated by the world of Dominique Perrault, this architect who builds endlessly – not just buildings, but new territories. During the interview, night fell, but this did not stop the interminable movement of Paris beneath my feet.