“Does Wolfgang Schäuble really understand what it means to be a young Greek in these times?”

Café Babel Athens was recently awarded the Charlemagne Youth Prize in Aachen. In the train on the way back from Aachen we had the chance to talk with Elina Makri of Café Babel Athens.

While the conductor was checking tickets and an anonymous voice was announcing the upcoming stops and the hills of North Rhine-Westphalia were passing by, Elina told us about the feeling of confusion among young Greeks today, about the lack of knowledge of European journalists about their own continent and about the projects of Café Babel Athens. 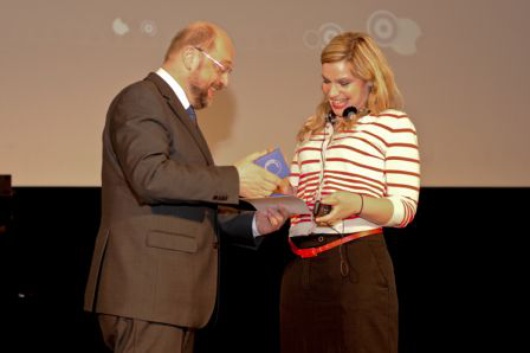 Café Babel: Elina, congratulations on winning the Charlemagne Youth Prize! Wolfgang Schäuble, the German finance minister, also a Charlemagne-Prize-recipient, said it was an important sign that a participant from Greece had won the prize at this time, because this was a time of crisis. How did you feel when you heard this from Schäuble? Elina Makri: I hope he means it.

Do you doubt it? I don’t doubt it but I think it is very difficult for him to imagine what it means to be a young Greek right now. But I also think it is hard to imagine what it means to be the German minister of finance. You have responsibilities. If an Italian finance minister had made such a remark, I would have said: ok, he might really mean it, he might be better able to understand.

If Schäuble were to ask you: How does it feel to be a young Greek at this moment, what would you answer? Being a young Greek, today, is very confusing. You don’t know where to turn. Honestly, before the award, even in the airplane, I was thinking what am I going to do in Aachen? You know, being asked all these embarrassing questions about Greece and not knowing what to answer.

"All the news about Greece is bad news."

Do you try to deal with this feeling in your texts at Café Babel Athens? The last articles were about modern start-up companies in Athens, situated between ancient books and Greek columns. That is currently a huge trend in Athens that nobody in Europe talks about because this group of Greeks doesn’t look to Europe at all.

Where do they look instead? Their focus is on California, China, and Israel, because there are a lot of venture capitalists there. That is a big trend and, right now, you will find a lot of cooperative work spaces in Athens. These start-ups are usually mentioned in the New York Times, but never in any European news media.

How do you pick the topics you report on? Café Babel Athens is a Café Babel inside Café Babel. We are always criticizing the European view on things. I think that many Europeans are Manicheans - you see a fact, and you interpret it as either only good or only bad. I am trying to convey the message that there is not always only bad news. The idea is to offer a new perspective. 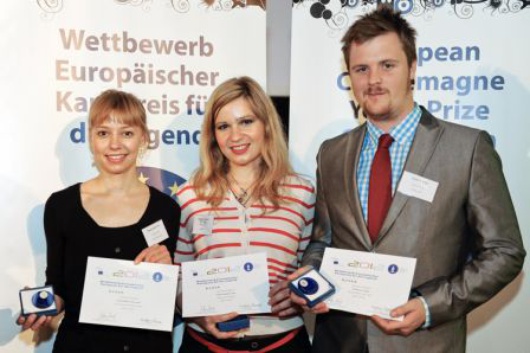 I’ve seen you read the Financial Times. What kind of story about Greece is missing, for example in the Financial Times? In the media you find only judgments. They don’t promote alternative scenarios. I don’t understand, for instance in the financial realm, why Greece needs to either leave the euro zone or meet harsh austerity measures. Why can’t Greece be given more time? Public servants are laid off. Why kick them all at the same time, and not, say, double their work? That way, public work would grow and investing would increase. I don’t understand why there are no alternatives in the discussion.

"At the Greek-Turkish border, you would find a third-world situation."

In Aachen, you also met Martin Schulz, President of the European Parliament. In his laudatory speech, he said Café Babel Athens is helping to develop a European public sphere, which is important for European democracy. In Europe, as journalists, we have to know more about each other. Imagine going to the Greek-Turkish border right now and seeing this third-world situation. Once you are exposed to that you are much more sensitized. And this is what is important about our Café Babel project “Europe on the ground.” We’ve sent a lot of people out of the country every month to see things with their own eyes, to understand the facts. So far, only a small elite has been reporting from abroad. It is difficult to find newspapers that are willing to pay for foreign correspondents. To change that is extremely important to me. 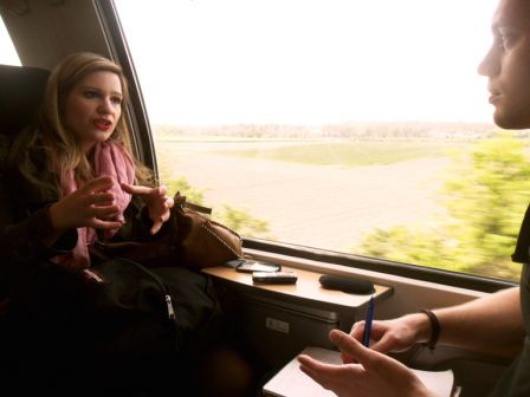 Elina Makri (left): "Solidarity is not only about money!" (Foto: Lucy Patterson)

What will you and the Café Babel Athens team do now, after winning the prize? I am so happy! We have all these beautiful projects, so we will continue with them. Last month, we had five journalists visiting us - from Britain, Slovenia, Spain, Belgium and Hungary. It was a very nice team, investigating multiculturalism in Athens. They were writing about the situation of illegal immigrants in Greece, a situation that is quite depressing. They were following the path of asylum seekers. In Greece you can ask for asylum only on one day every week and it’s always a Saturday at 5 a.m. In the past, there were people who were killed for queuing. With “Europe on the Ground,” we tried to inform people about the problems with migration in Greece. You have 300 to 400 persons entering the country every day. It is one thing to discuss this theoretically and something else to experience it. Some people drown when crossing the river at the Greek-Turkish border. We are burying them without knowing what their religion is. We just have a Mufti saying verses from the Quran, and that’s it. But these are European borders! We also discussed Dublin-II, a disgusting European regulation stipulating that all immigrants can apply for asylum only in the European country they first enter, a fact that is largely unknown in Europe. Especially in the case of immigration there are huge social costs, but, generally, little solidarity or sympathy with the problem in Europe. You see, solidarity is not only about money.

Elina, thank you very much for your time and good luck with Café Babel Athens!