) This is considered a clear example of a political system who at it's era was unable to comprehend the needs of the society. An image of the same radius is happening today also in Greece. The political system of today, cannot (?) understand the routes of the problems and therefore to solve them. The problems who brought the society to the edge of destruction. PM Karamanlis, announced a series of measures - important measures- which even though do not solve the problem. At this very moment the damages in Athens are about of 200 millions euros. It is really odd, that before some months the government was unable to find half this amount in order to fund poor people and as by miracle, those ''inexistent'' money were found! Even though the PM insisted of self-restraint he would certainly meant the labor unions not the police. The public force provoked the society again, through gunshots and tear gases during Alexi's funeral. Even today, 5th day of the riots, the police withdrew from Korai Square after mobilization of citizens! Day after day, it is becoming clearer that there is a plan in order to disdain the cause of a whole generation, our generation, just because some so-called anarchists burn Athens under the eye of the police. Nobody feels good about what is happening in Athens all these five days. Why 150 policemen in Syntagma Square couldn't arrest 10-20 anarchists who threw rocks yesterday? The media revealed today that those special guards -like the policeman who shot the boy- get a four-month training instead of a four-year training which is required for ordinary policemen, while there are no psychological test for any policeman! To those people the Greek State trusts its guns in order to protect civilians! 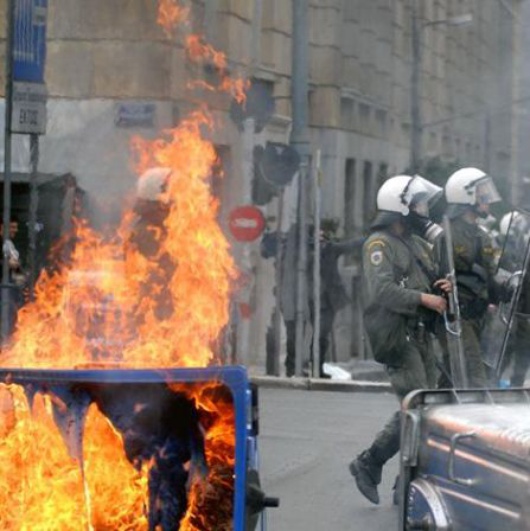 Suppose those things weren't enough, the accused and his counsel of the defence, acclaimed that ''whether or not this child should die...is a matter of the justice''.

No, it's not. The justice is not the one to answer whether the child SHOULD die or not ! The justice is the institution which will decide the punishment for this policeman who thought that by carrying a gun HE WAS THE LAW ITSELF, not the servant of the civilians and the state. It is clear that they do not respect even the memory of the child..Not even a sign of penitence! What an attitude for a man who with his blood-painted hands opened the Pandora's box.. The day of Alexis's funeral, his fellow students wrote a paper which had as a PS for the policemen : ''Do not throw us tear gases. We can cry on our own...''