Only a few days left until Germany goes to the ballots. Although many have described the run-up to the elections as boring and uneventful, Louis Klamroth and his team at Diskutier Mit Mir are spicing things up. Their online chat platform pairs people from either side of the political spectrum in Germany, forcing strangers to confront and justify their vote-to-be.

The show is over. The giant lights slowly turn off. Louis is still standing at the table with Katrin Göring-Eckardt, the new leader of the Green Party. The location is the Alte Kraftwerk, an old electricity factory in the middle of Berlin. It’s now used for events and companies, and it also houses a TV studio where Louis Klamroth hosts his political talk show Klamroth’s Konter on n-TV. He is the youngest talk show host in German history. “Konfrontativ, kritisch, kurzweilig” (“Confrontational, Critical and Entertaining”) is the tagline of the show. He had guests from all over the political spectrum over for interviews of about 20-30 minutes in a very busy elections season. Live segments and a weekly show has spiced up the election coverage with a fresh young face. Because other than that, Louis says, it’s been rather boring.

Besides his weekly show, he has been working on another project, one that is aimed at facilitating discussion between people from the different sides of the political spectrum. An online space where someone who supports Göring-Eckardt and the Greens could talk to a Merkel fan or a more right-wing voter. It’s called Diskutier mit Mir [NB. 'Discuss with me' in German].

Only a few days left until Germany goes to the ballots. Campaign season is usually a time of division, polarisation and heated debate. It’s normally a time when political opinions and discussions are thrown at you at any given moment, and alcohol-induced political banter flies past your ears in any bar you’re in. Not in Germany, where many have described this election as quiet, boring or a ‘done deal’. Even Nigel Farage can’t really shake things up. The general consensus is that Angela Merkel will remain chancellor, and most of the talk is about the potential outcome of the coalition that has yet to be formed. Will she side with the Greens, her preferred Liberals, or will the Big Coalition (CDU and SPD) live on? And what will the more right-wing Alternative für Deutschland (Alternative for Germany) do?

In real life and on social media, people from either side of the political spectrum don’t really talk to each other. Take this example: a certain Peter is an AfD-aficionado. He is probably very angry over what happened in Hamburg during the G20 and has his own opinions about immigration. If he would want to discuss this with Heike – who is very concerned about climate change and probably has opposing views on migrants, but might agree with Peter on the unrest in Hamburg – where could they talk? How could they find each other? In real life, due to an increasingly polarised media landscape, we rarely come into contact with people whose opinions are vastly different than ours.

The Filter Bubble. This strewn-out concept has risen to popularity after the shocks of Brexit and Trump in 2016. It led analysts and commentators to trip over each other in order to shed light on the subject. Whatever you think about it, it’s something that’s becoming an inextricable part of our reality. But is it possible to burst these filter bubbles? 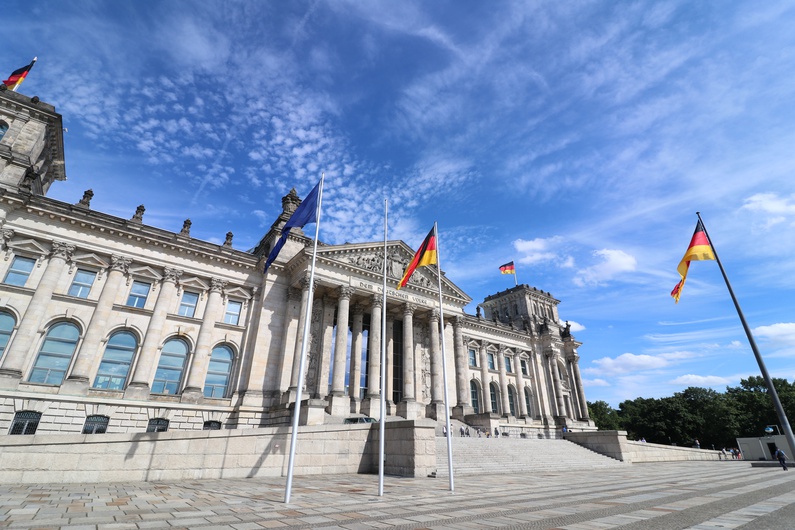 From the Netherlands to Germany

Three young and hip Germans sit in a coworking space in Berlin. Their goal? Bursting these so-called filter bubbles. They laugh: “That’s the challenge, right? But it will be a steep climb.”

The three young entrepreneurs are Moritz Hohenfeld, Niklas Rakowski, and the charismatic teenage movie star Louis Klamroth. Their plan is simple: invite people from different sides of the political spectrum to have a conversation on a one-on-one online chat environment – Diskutier Mit Mir.

“We didn’t come up with the idea,” Louis rapidly admits, “It is inspired by Waarom Kies Jij? [NB. Why do you choose? In Dutch], which was rolled out in the run-up to the Dutch elections back in February." Waarom Kies Jij was a platform that enabled random visitors of the website select their political orientation and then get matched to someone from the ‘other side’ in order to have a conversation. The initiative was set up by a group of Dutch students who felt that, especially after seeing the American elections, polarisation in society was something that could only be tackled by forcing people to engage in conversation. They hosted over 50,000 conversations in the run-up to the Dutch elections and made headlines in their attempt to burst Dutch filter bubbles. NRC, one of the country’s biggest newspapers, teamed up with them in order to facilitate real-life discussions next to the online tool as well.

Louis knew the people behind the Dutch idea and he said he was about to write to them when they reached out to him and said that it would be something for in Germany as well. “I immediately called up Moritz and Niklas and they were in. We all were on board immediately. But yeah, now it’s 22:45 on a Wednesday night and we’re still working. It was much more work than we expected,” Klamroth admits.

The boys all know each other from Kindergarten or high school and they always wanted to do a project like this together. “There were never any fights or arguments, just discussions. Our communication is perfect,” Louis says. “But it makes it a bit more unprofessional to be honest,” Niklas jokingly adds. The empty beer bottles are lying around and the harsh TL-lights don’t make it a very flattering sight in this industrial working space, but it keeps one awake. As a basic laydown of the idea, they pitch their idea in 30 seconds:

Niklas: “We are getting people into contact and let them discuss politics. We link people from different political views and enable them to have a discussion politics… Right?”

Louis: “We want to burst filter bubbles. We invite people from all sorts of political views to match with others on our platform and engage in a one-on-one chat, and start talking to each other rather than about each other.”

Moritz is more practically minded, he says: “You get on the website, you choose a party or orientation, you get matched with someone who’s as far away from you as possible on this spectrum and the website facilitates a space for discussion for the two of you. Political dialogue, which is rare online.”

The idea becomes pretty clear, especially when taking a look at the website. It’s all fairly easy; no registration required, no information asked. Just a simple – though tastefully designed – Chatroulette sort of system where you are matched with your anti-thesis on the political spectrum. “We can’t judge the quality of the discussions,” Niklas adds, “we’re not able to look into the discussions. We can look at indicators, such as the length of the discussion and the chosen themes. This gives us a lot of feedback without intruding the privacy.” 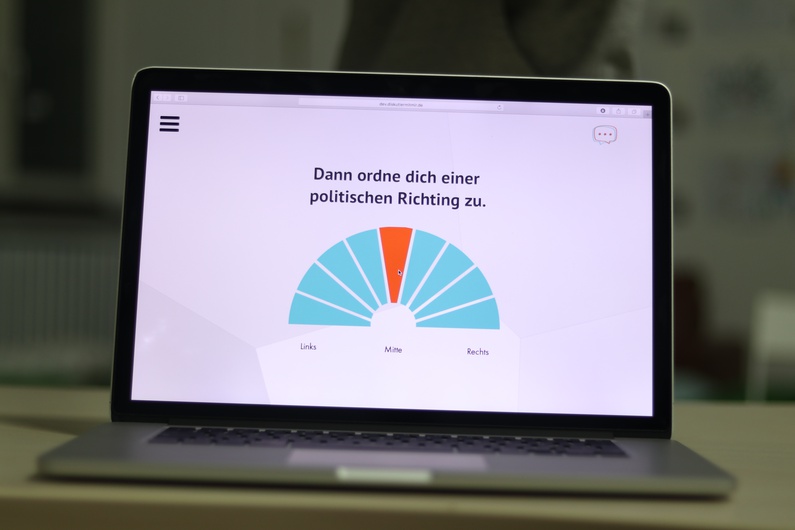 After browsing the site, it is time to engage in a test-conversation with Niklas. “It requires an active step from your side to be able to leave your comfort zone,” he says. “Most of the time, when this happens online – on Facebook, in comment sections – it almost never ends in a constructive discussion, but rather with people slipping into hate speech. The solution to that is a one-on-one chat with no audience.” But why would this be any different? Especially if you have people with such opposing views talking to each other. Isn’t it either going to be a very nice or a very hateful conversation?

“Sure, both are possible. But the Dutch experience showed that from the 35,000 conversations, they only had to ban one person,” the boys explain. Moritz mentions that they are planning to target specific communities with targeted Facebook ads, and how they are going to use Louis’ media presence. Niklas refers to similar project by Die Zeit Online, called Deutschland Spricht. “It was a beautiful project, the discussions were probably of higher value than ours, but our online project is easier to use. You can match people from Bavaria to people from Hamburg and they could discuss Greece or the Euro,” Moritz says. “We are not selling this as a social start-up, it’s a platform first... there’s three clicks on a website and you’re in a conversation. It should be this simple.” 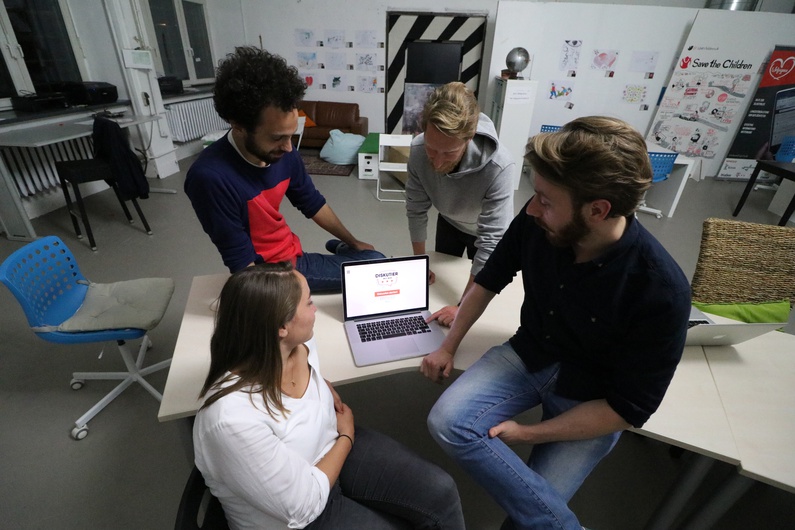 It’s two weeks before the election and Louis is happy with the launch. They had 80,000 clicks in the first two weeks alone and over 10,000 conversations. “But I’m most proud about the length of the conversations. Most visitors spend on average eight minutes on the website. We have managed to make it an engaging tool where people stay for meaningful conversations.” When asked about how the elections are going, Louis mentions that they are working against Diskutier Mit Mir: “The election cycle is just not very polarised, which is a good thing of course, but it means people might be less willing or even able to engage in these kinds of controversial conversations.”

The first TV debate between Chancellor Merkel and her main competitor (and current coalition partner) Martin Schulz of the Social Democrats (SPD) was widely regarded as won by Merkel and it showed her stable position. It also showed the non-polarised nature of the elections. The two front-runners clashed over migration and Turkey, but Schulz never seemed to be able to show that Germany needs to move into a different direction. Main conclusion: Merkel’s position is secure and there are no real threats to the direction in which she has been moving Germany over the past years.

But regardless of the non-polarised nature of the German elections, the boys at Diskutier Mit Mir have managed to make things work. “We managed to have people from all sides of the spectrum to come online and talk. AfD & AntiFa, Christians and young start-up geeks, young mothers and pensionadas alike. It’s often hard to get the extremes to work with you, but we managed. I’m happy about that.” The group is also in talks to continue this project after the German elections, even onto a European level. “You can use this tool for any discussion on a societal level. Regional elections or European referenda. You name it. That’s really cool and also really necessary,” Louis says. It’s promising that this tool could be applied to regional and European level discussions. It might be exactly what the continent needs in these times.

The intense and polarised election cycles in the Netherlands, Austria, the United Kingdom, France and huge events such as the G20 in Hamburg have shown us what happens if people retreat into their own circles and don’t come out to talk. WaaromKiesJij in the Netherlands, Diskutier Mit Mir in Germany and future projects across the continent could be very useful tools in allowing people to engage in conversation. Europe could surely benefit from it.