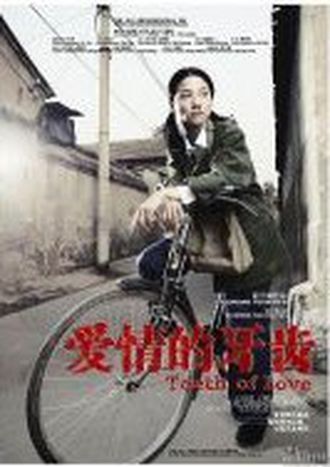 “You will always find at least one Chinese in a casino, we just love gambling. And for what I'm seeing here, I think Estonians are quite the same!” Yuxin Zuhang is one of the important guests in this POFF Festival: with his first featured film, Teeth of Love, touchy-feely description of a changing China, he travelled around the world getting awards and discovering a lot of interesting stories.

“I always try to talk to people as much as I can when I am abroad, it's the best way for discovering a new country, a new culture. Somebody told me that Estonians, they are really cold and shy, the opposite of Italians, for example. Is it true?”

“We, in China, do not distinghuish European countries so much and clearly, we don't know all these differences. But after visting France, Munich and Stockholm I started to understand that in your continent you have a lot of different way of living and attitudes”.

Mr. Zuhang is a still quite young director with some clear plans for the future: “ I have two projects – a big and expensive one and a more modest and cheap one - that I would be ready to start almost immediately, but it will all depend on the budget I will get. You know, even for Teeth of Love it has not been easy to get the funds I needed.”

But what does he think about Estonia? Is it his first time here?

“Yes, I have never been here and I am glad I came: actually I thought it would have been a bit different but, beside the weather, it looks like a nice and interesting place.” he tells me.” Just..it really looks...small!”

About refusing the luxury POFF BMW for going from Vene Teater to the Park Hotel - “it's so close! We could walk!”, he tries to compare his Beijing with our Tallinn

“It is simply amazing. If you just consider the number of inhabitants, Tallinn is not even a Beijing's district...and it all looks so quitet! Traffic, for example” he says while pointing his finger on the car's window in Tartu mnt.

“In China we don't have rush hours because the whole day is a big rush hour. Too many people is using cars and moving in Beijing is becoming a nightmare. You feel like you are wasting your life in your car! And I amo not talking about public transports.”

“Because until they will not finish the works they started because if the Olympic Games, we will still have only 3 metro lines! Can you imagine? Only 3 lines in a city where 15 million people live!

It is just absurd to me. And look at Tallinn then. You can use a tram, a trolleybus, a bus...when you are really too lazy for walking! Here everything look like “in walking distance” to me”.

The more we talk and the more I enjoy his way of observing things, the more I want to ask him something about our EU. What does he know and what does he think about that?

“I love your football, especially the Italian one. You have a lot of fans in China, do you know that?Even I, I know Italiab geography thanks to the football teams!” he says laughing.”

“And there are a lot of other interesting things here. I know, for example that you can use drugs in Netherlands, a country where also gays can get married”tells wish a bit of sarcasm that is quickly replaced by astonishment when I reveal him that it is now possible also in Spain. “Really?” he asks me visibly surprised.

What about in China, then?

“No, in China this is impossible, it is a too sensitive subject. Just think that also a really famous movie as Ang Lee's Brokeback Mountains did not get the permission to be screened in the Midlands: we are not ready for such things yet.

Chinese cinema, as Chinese society , is quite different from the Western one, we are less direct than you. When we want to say something, we do not use to say things straight, we play with concepts and words. But I would also say that things are slowly changing now.” And, probably, between the hard scenes of a private abortion and the description of a time when being a woman and being in love was almost considered as an illness, his movie is giving its contribution.

“ I think the Ambassador did not love my movie” he says “ but I think this is totally normal. I hope the public will enjoy it more”

Teeth of Love is not a kind nor polite movie: it shows a China we do not often see on the screens, a China that, right after the Cultural Revolution, had to start dealing with an impressive number of contraddictions.

“I hope people will understand that mine is not a pessimist work, I did not mean to be negative. The pain that I am showing is not necessarily something bad, is instead a starting point. It is thanks to it that the protagonist will start to discover and understand herself.”

And it is thanks to that, someone said, that Mr. Zuhan's name might become part of POFF history.