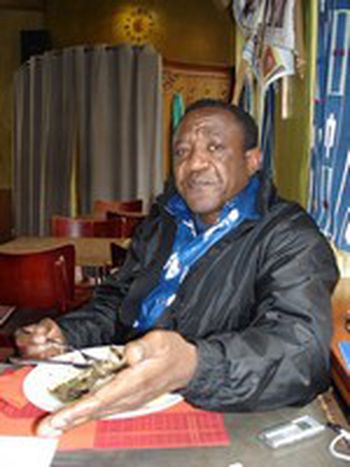 As the former Zaïre prepares to have its first democratic elections in 45 years, Congolese-born comedian Dieudonné Kabongo talks about Africa and the disillusionment of young immigrants who try their luck in Europe

"What I am about to say is no laughing matter," warns Dieudonné Kabongo as we start our Brunch. The 56 year-old Congolese comedian who lives in Brussels arranged to meet me in an African bar-restaurant in the trendy and popular district of Ixelles. Behind the slightly worn white façade, the rainy, dull weather is forgotten: instead, the gentle murmur of conversations at the bar and the breezy rhythms of the light African music add to the colour and atmosphere of the place. Exotic aromas of lamb in peanut sauce and chicken yassa tease us gently.

My companion is tempted by a grilled fish steak, livened up with a generous dose of chilli sauce. Before meeting me he was rehearsing his show and admits that he ‘forgets about everything else, even food!’ Tonight Dieudonné will be performing a one man show. The theme of his act? Losing touch with one’s past.

In his twenties, Kabongo had arrived in Belgium to study mechanics. How did he become a famous comedian? Letting the fish cool on his plate, Kabongo tells me his life story. He caught the love of performing "like a virus that eats away at you bit by bit".

In 1984, Kabongo ‘bags all the awards’ at the Rire de Rochefort festival with a self-penned show, ‘Beware of the tsetse flies’. Success is on its way: Kabongo subsequently takes his boxer physique and one man show to Canada, Switzerland, the south of France… But, being a true artist, he can turn his hand to anything and isn’t afraid of crossing over into other genres: in 2005, he experiences the joys of cinema, filming ‘Le Couperet’ with Costa-Gavras. And he regularly presents programmes on Belgian radio, where his voice, like some magical instrument, ‘allows listeners to imagine their own stories’. With his warm, captivating voice, Kabongo is a born storyteller.

To laugh or to cry?

My guest is dressed in a blue and white African shirt, with a slightly austere black jacket over the top. Though a comedian, he doesn’t look like a joker: his face and opinions are serious. When I ask if it is possible to joke about everything, including colonisation, he shoots me down with a dark look. ‘I discuss a lot of things in my show, even colonisation. People laugh, but the topics are hard!’ Kabongo’s mission is to make challenging jokes which trigger provoking thoughts.

On stage, his performance is restrained and subtle, and his humour is black, even raw. Dismayed to see an "Africa of child-soldiers that has lost its values and sense of solidarity, where people are killing each other, like in Rwanda and Liberia," Kabongo has opted for comedy as his somewhat disillusioned response. "With colonisation, the black man does not exist except through the white man setting himself up as a model before him," he continues.

A paradise built on a volcano

Dieudonné smoothly asks the waitress for a "hot wild one, please". Seeing my confused expression, he explains that this is a mixture of bissap, a blood-red juice made from hibiscus flowers, and ginger. Asked about Europe, the paradise of young Africans’ dreams, his smile vanishes. "I perform in a play called Landing, which is about all these people leaving Africa for Europe. I’m saddened when I see my people leave a continent as magnificent as Africa. Africa is a paradise, but it’s built on a volcano!" Passionate about this subject, he thinks that "the attachment to your country should be as strong as the force of gravity! Rather than struggling to get papers to move to Europe, it would be great to see Africans fighting to improve the situation in Africa!"

At heart, Kabongo, the Congolese European, is an optimist. His whole body livens up when he talks about the hope he sees in today’s African youth - a bit lost, but very promising. These teenagers striving for change, he knows them well from his involvement with a youth association in Matongué, the African quarter of Brussels. According to Kabongo, Europe’s model for integration is not the right one. "Integration is a two-way process! It must be based on exchange." Otherwise, ‘it can’t work,’ in an urban Europe in crisis.

I ask why, then, does he stay in Belgium. "I never applied for Belgian nationality because I’ve always wanted to return to Congo, but now I have more ties keeping me in Belgium – I work here, my friends are here," he admits. How would he describe his dream country? "A country where the heat of the African sun doesn’t melt the beauty of the snow," he answers, with the hint of a playful smile on his lips. For my guest, Europe and Africa are at once reason and emotion and can only belong together. "I am moved when I see Europeans playing the djembe," he concludes.