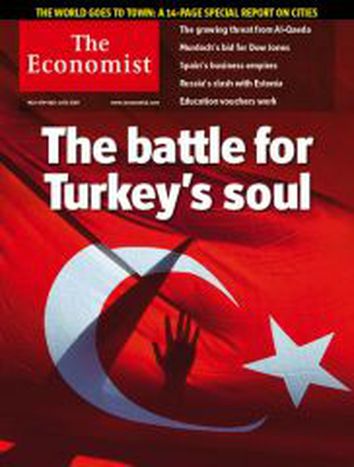 Sadly and finally another controversial lawsuit filled in Turkey, Turkish Chief Prosecutor Abdurrahman Yalcinkaya, filed a lawsuit against the goverment party, Justice and Development Party (AKP) demanding its closure. On the other hand a lawsuit demanding closure of Democratical Society Party (DTP) is stil going on.

Probably status quo demanding the closure of AKP will be eager about closure of DTP. Prosecuters are accusing AKP with being center of anti secular movements and DTP being separatist. What an easy thing to demand closure 2 in 4 parties of Turkish parliament (TBMM), so be it, lock the door of the AKP and close the DTP, eventually why don’t you close TBMM? I can hear your murmurs, “Noooo Ozcan, you are exaggerating”, but I assure you, these closures won’t be considered as exaggeration step by lots of arragont elites in Turkey.

Coup d’etat which was occured in 12 September 1980 created it's arrogant elites. Also I would like to assure you the anti- democratic elites are supporting baning entrance of mosques, churches and synagogues for people who are not 100 percent complied with constitutional proto-type of Turkish citizenship. Army’s coup d”etat launched a new constitution which was prepared with copy paste manner in 5 days, eleminated democratical politicans, institutions, prisoned democracy defenders and created it’s own haven and filled whole official cadres with people agreed to work within the ultra-nationalist goverment, within a secular and undemocratical framework. As result of this constitution Kurdish problem deepened and religion issues became more complicated matters of Turkey. Coup d'etate goverment harshly punished democratical insurgency emerged in 1980’s and awarded elites who were created after 12 september.

Today, Turkey is in new era, this is the modernisation era and democracy has never been desired so much by the society. However anti democratical elite circles, the lovely children of the coup d’etat are very concerned about this desire, because they will lose their initiative positions. Elites always frightened, divided Turkish society to nationalist and religion groups and confused them against eachother to enjoy their priviliged situations and delayed democratical reforms but the 22 July 2007 election evidently showed us Turkish people do not count on liars anymore.

These elite groups introducing themself as followers of Mustafa Kemal Atatürk, as a irony they coherently believe they are, but when it comes to “Republican” rule of Atatürk they behave different, for example they didn't respect result of elections and lots of times they supported closure of political parties. “Peasant is the sir of the nation”, said Mustafa Kemal during a visit to a town in 1920’s, but from the point view of the elites, villager is the real banal servants of the elites. Also according to them, there is a constitutional citizenship streo type; Constitutional Turkish citizen should be 100 percent Turkish nationalist, be sunni muslim but not religous, be secular and social alcohol drinker and be soldier from the birth. Arrogant Turkish elites are accustomed to enjoy their special status while eating cheap meals and drinking cheap beer or cola at state facilities.

Our lovely elites are the dauntless defenders of status quo, they are accustomed to ask help from armed groups when they face a danger against their special benefits. Last year they worried to lose their initiatives during presidential elections, first of all they tried to effect Turkish Army to interfer but couldn’t be successful, hopelessly they pushed the button to defend their advantages, they effected the society with ordinary lies against goverment party AKP. Protests held in Ankara, Istanbul, Izmır and Manisa but this tactic didn’t work, they inspired from crowdy protest meetings and wanted early elections. Finally they lost elections and got a strong slap from the nation, AKP won the 47 percent of the votes.

They lost elections, other struggles and now, they are trying their last choices to block democratical future of Turkey, but we should ask them whether a cheap beer will worth destabilisation of Turkey or not?