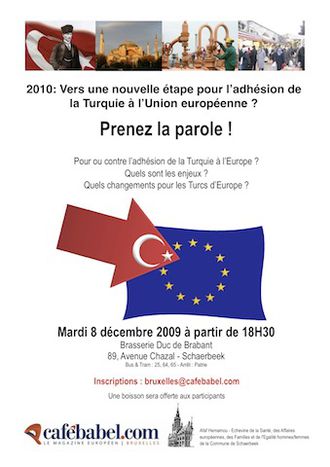 Debate Cafebabel - 2010: A new step towards Turkey's accession to the EU?

Take the floor! In favour or against the accession of Turkey to the EU? What is really at stake? What changes can Turkish people living in Europe expect? The next Café Babel Brussels debate takes place Tuesday December 8 at 6.30 p.m. at Brasserie Duc de Brabant, 89 Avenue Chazal in Schaerbeek.

After the entering into force of the Lisbon Treaty and the possible reopening of the debate on the accession of Turkey to the EU, Cafebabel Brussels together with Ms. Afaf Hemamou, Deputy Mayor in European Affairs and in Men and Women Equality for the Commune of Schaerbeek, invite you to participate at an interactive and innovating debate.

During the debate, you will also be given the possibility to ask questions to the participants on the future of Europe and which issues - energetic, economical but also social and cultural - are at stake.

A drink is offered to the participants!