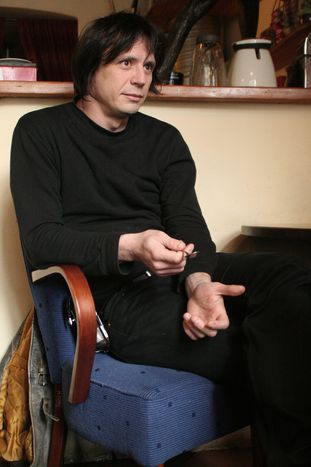 We met the politically engaged sculptor, 40, in 2007. Labelled by many as 'the scandal maker', he is back in 2009 to pinpoint the Czech presidency of the EU with his installation of national stereotypes at the European parliament, alleged to be a hoax

In his book The Fucking Years (2003), David Cerny calculates the years he has spent as an artist into the amount of sperm he used (for those interested - 30 litres). 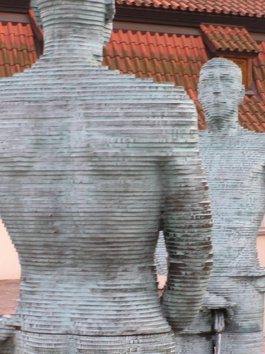 The renowned contemporary Czech artist first became famous when he painted a tank pink, to ridicule the symbol of the soviet 'liberation' of the Czech Republic. Among his portfolio stands a pastiche of Saint Václav (Wenceslaus), depicting the Czech patron sitting on a dead horse which hangs upside down. And we can't forget those metallic gigantic babies crawling up the Czech TV tower. His installation showing former Iraqi leader Saddam Hussein in an aquarium filled with formaldehyde and a pastiche of an installation called Shark were banned in Poland and Belgium in 2006.

Yet he denies being famous and, when discussing his famous sculpture of a horse, he rebuffs: 'it’s the horse that’s famous, not me!' Soviet troops long left Prague, but Cerny still finds much left to protest about.

You are best known for your controversial art and wittiness. Has either of these caused you any trouble with the officials?

Yes, my most unpleasant clash with city officials took place about two or three years ago. The local city council, Prague I, announced a competition for the construction of a memorial of the WWII. I was asked to take part in it and I won, to everyone’s surprise. I was being interviewed by a friend who shares my anti-communist sentiments. At that time, the government in power belonged to the post-communist fraction. When I was asked my opinion on the fact that some people who died in the resistance movement during world war II were communists, I quipped back with a Castro quote: 'a good communist is a dead communist.'

After that, even though we were about to sign a contract, they took the project away from me. I wouldn’t have minded if they had cancelled the competition altogether, but instead someone else did the memorial. Now I have to pass by that piece of crap every second day and it just looks like puke.

Or just a case of a bruised ego?

Oh no, it’s not an issue of my ego being hurt. It’s my aesthetic sense that’s suffering!

What effect did fifty years of communism have on the city’s architecture? 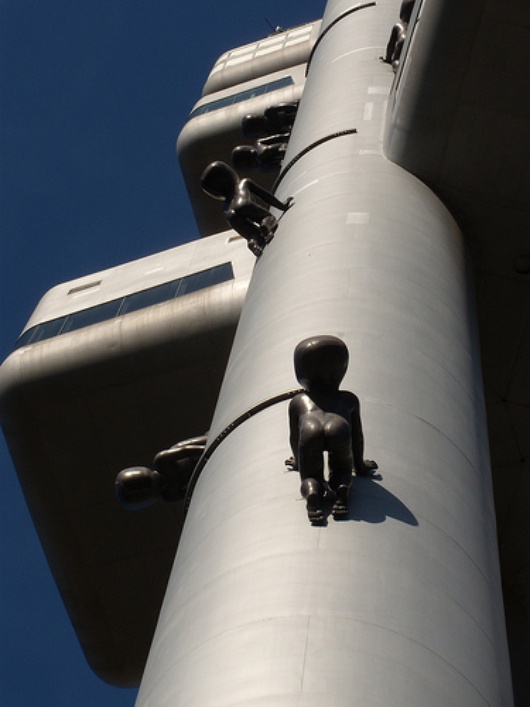 The country was ruined and completely spiritually destroyed. It’s like asking about the consequences of world war II. It’s enough to take a look around. The city centre is surrounded by atrocious cement blocks – the trademark of communism. They‘re a real eyesore. Or the fact that we have a highway in a middle of the city! Have you heard of such notorious misconceptions about managing urban space elsewhere?

We still have problems. After fifteen years, they are still considering whether secret police documents should be made public. Had it been done immediately after the fall of communism, we could have avoided years of speculation about who was and wasn’t a secret service agent.

There are of course cases of people who were tortured, who signed agreements to collaborate with the secret services and immediately fled the country. There were also those who were tortured who signed them and then warned all of their friends. Finally there are some people who are now viewed as 'respectable dissidents.' They signed these agreements, betrayed their friends and sent many of them to jail. The information about these people should finally be made public!

Don’t you think that today the city, continuously flooded with tourists, is deprived of its mist of secrecy and has become some kind of 'Kafkaland'?

Well, it's definitely better to have the city be flooded by tourists than by the Russian army. That’s the price we have to pay for change. The tourism boom will end sooner or later. Of course I think that it’s a good thing for the city in some ways, because it provides a continuous flow of capital that can be used for reconstruction. I’d be happy to see some more intelligent solutions as far as the city’s urban planning is concerned. I don’t see enough effort of the city authorities in that respect.

There are several buildings which are incredibly hideous. What I don’t like about Prague is that there is no coherent project for its urban renewal, no status quo between cultural protectionism and urbanism, between what ought to be preserved and what should be destroyed. There are millions of buildings like the one we’re in right now. But they are legally protected as part of the historical heritage. There’s no way to build anything new here.

Recently, we’ve been discussing the construction of a new national library to go where the world’s largest monument of Stalin used to be located. Jan Kaplicki (a famous architect, amongst his most notable works was the Parisian Pompidou museum), won the competition. Yet even a project by such a world-class architect is controversial. Many consider his proposal too modern or out of place. Personally, I think that he designed an amazing building - it would be great if it was erected.

Which one of your projects did not end up being completed and why?

This nation is full of f**kers and w***ers

I designed the sculpture right before the referendum in which the Czech Republic was to decide whether or not it wanted to join the EU, and no one was sure how the countryside would vote. I wanted to provoke the nationalists. President Klaus was very much against the idea of joining the EU at that time. But he's a f***ing a**hole in general. It was my way to show that this nation is full of f**kers and w***ers.

However, a controversial fountain of your design, showing two men peeing into a Czech Republic-shaped pond, was successfully erected in the centre of the old town. In most European countries you’d most likely have been sued.

Hahaha! It only worked because it was a private investment. Actually, a couple of months ago, during the autumn, there was a skinhead rally nearby, and they were screaming and they moved towards the fountain ready to destroy it. What’s funny is that this evoked police intervention. The police moving in to protect my work with their plexiglas - ironic or what?

You lived in the US for two years. What’s the biggest difference between European and American life?

The way in which the banks work! (laughs) No, but seriously. I think that my biggest problem with the US is the artificiality. I was just about to move there when I decided that it really did piss me off that everybody was nice to me, because I was 'that sculptor from Czechoslovakia.'

It really did piss me off that everybody was nice to me, because I was 'that sculptor from Czechoslovakia'

I was bored of this and at the same time I could have more fun here. I hesitated for a couple of years before finally coming back home. And not only because of the girls here!

Of course! God! All the time! But at the same time, I just finished a big project to be shown in the US and I’m in the process of creating a second installation. Not in New York, in North Carolina. In the middle of nowhere! (laughs)

Do you see yourself as an artist, performer, or political activist?

I hope that at the end of my life I will just be able to say 'I was a good sculptor'.

First published in May 2007 on cafebabel.com