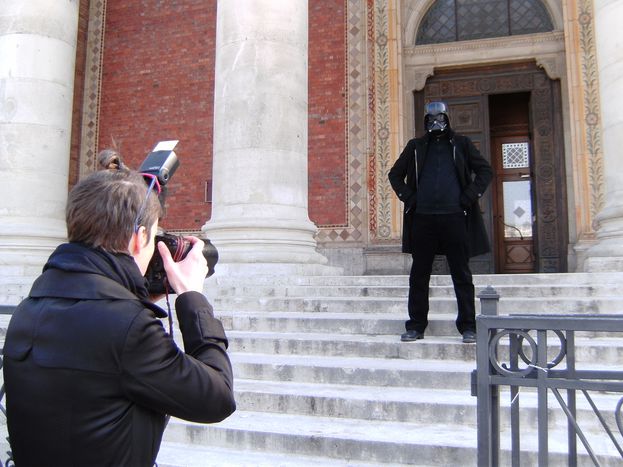 What happens when the authorities fail the citizens? In Hungary, artists have taken matters into their own hands and unwittingly created a new contemporary art movement through the space reserved for protests outside of the city's disputed contemporary art centre

Hungarian art critic József Mélyi laughs as the artist  pulls out a Darth Vader mask from his bag and straps it on while balancing his cigarette in his hand. Szabó climbs the stairs to the Kunsthalle Budapest (Mucsarnok) and stands between the massive columns lining the entrance. He places his hands on his hips while photographer Dorottya Vékony takes pictures. What might St. Stephen, patron of the arts portrayed in the mosaic above, be thinking of this black-clad man? 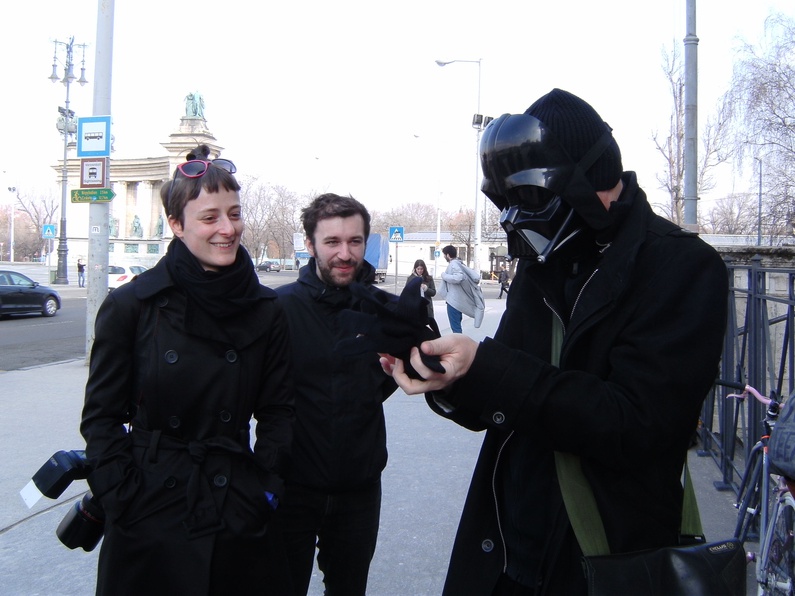 Darth Vader is only one take on the decision to let the Hungarian academy of arts (MMA) take over the art hall. Each week József Mélyi, who also teaches at the university of fine arts (HUFA), and his two Phd students Márton Pacsika and Eszter Ozma come here with a new pairing of artists to make protest art against the MMA, a conservative art academy which has now become the highest authority in Hungarian art. Together, photographer and artist create an image which is then added to the blog Kívül tágas. ‘Roughly, it means ‘outside is more spacious’, but it is also a nice way of saying ‘get out’ in Hungarian,’ says Márton Pacsika. 'We were debating whether we should go and sit outside the Kunsthalle for a week or a night,’ says József Mélyi, about how to react to the decision to give the art hall to the MMA. 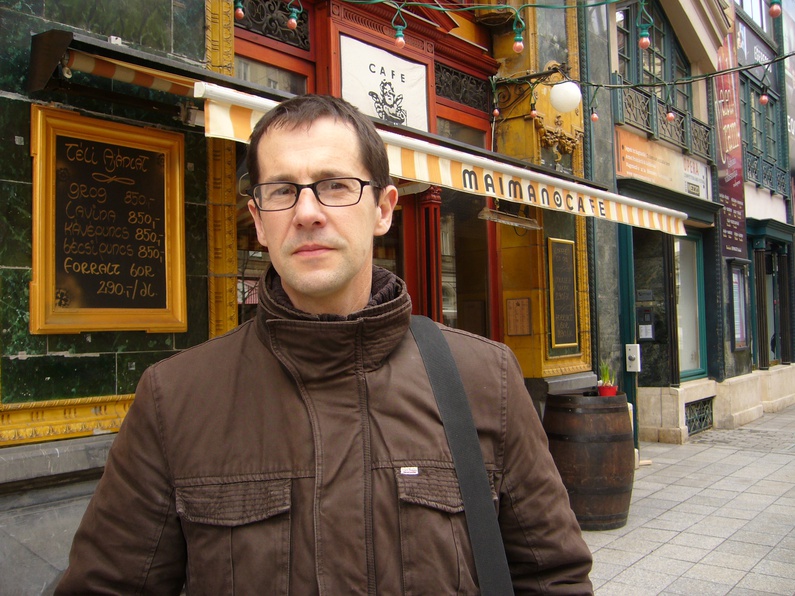 Instead, they opted for a long-term artistic protest. 'The only chance we have is to keep the topic in the public sphere until the next elections in 2014.’ And so the stairs leading up to the entrance with the massive Heroes’ square in front have become a new scene for contemporary Hungarian art.

Glancing up at the huge building, photographer Dorottya Vékony doesn’t know how to put her opinion on the MMA into words. 'But that’s also part of the reason I’m here,' she says. The ‘magyar művészeti akadémia’ was founded in 1992 as a private art academy by a group of conservative artists. In 2011, one year after Viktor Orbán’s fidesz party came into power with two-thirds of the parliament, it became Hungary’s official art academy and was written into the constitution. Representatives at the ministry of human resources do not answer my questions about giving power to the MMA but refer me to the academy itself, which responds obliquely: ‘We are fully aware of both the supporting and the opposing notions regarding Kunsthalle’s future functioning. However, professional criticism cannot be well-established at this point, as the cooperation of the two institutes still lies in the future.’

Controversy has surrounded MMA’s 82-year old director György Fekete, who in an interview said that artists should be proud of their nation, and not criticise Hungary nor religion. Recently he accused an exhibition at Kunsthalle called ‘What is Hungarian?’ of national blasphemy. Shortly after, it was announced that MMA would take over Kunsthalle. MMA would not oust the current director Gabor Gulyás, who was appointed by the fidesz government, but he has said he will resign when the changes come into effect. 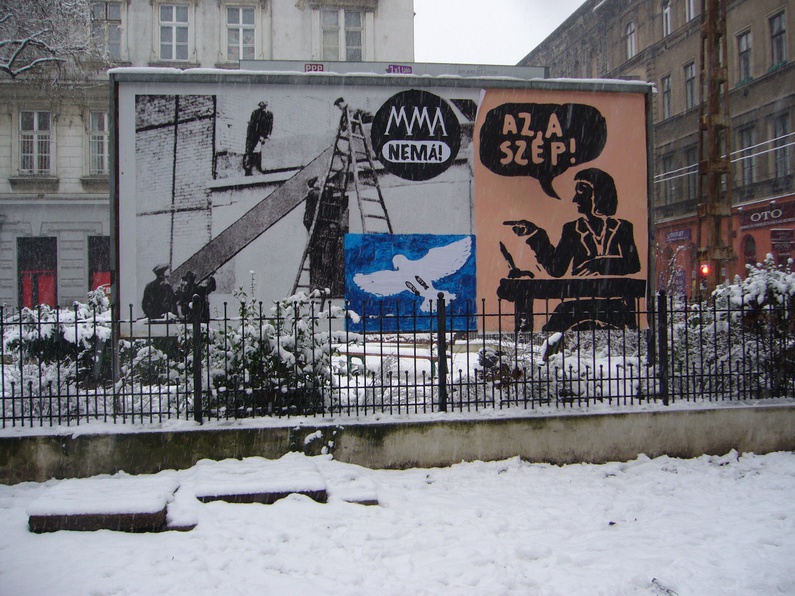 Apart from a politically skewed allocation of culture funding, culture journalist András Földes fears that all events and venues for independent art may be shut down. ‘Hungarian museums are already struggling to pay for heating,’ he says at the office of his online paper Index. ‘Historians are doubling up as museum guards due to staff cuts.’ According to Földes, not all MMA artists support fidesz or care about politics. There’s also the money. The monthly salaries that MMA members get are a rarity on the Hungarian art scene. Does nobody object? 'Those who are against are not members anymore,' he replies. In December 2012, eleven members stepped down, but some 250 remain. The average age is over 65, and there are few women. Földes takes out his phone to show a photo taken from the back row of an MMA meeting, showing a bunch of heads from behind. ‘See, it’s all grey hairs.’

'People think that the MMA’s cultural power is a sort of compensation for the past, when any conservative artists were repressed during socialism'

The meeting, held in December, was gatecrashed by the protest collective free artists. One MMA member hit a protester with a binder, and the protesters were branded 'communists' and 'bolshevik's. 'Their reaction shows how they live with past frustrations and confusions from Hungary’s troubled history. They think that the MMA’s cultural power is a sort of compensation for the past, when any conservative artists were repressed during socialism,’ says Márton Pacsika, who participated in the event. 'It’s a right-wing takeover of culture. Every authoritative regime begins by trying to occupy every field of life: culture, politics, economy. Viktor Orbán doesn’t care about art. He is outsourcing the money and power to the MMA so he doesn’t have to bother. There are good artists in the MMA, but the problem is that they want to create a culture system. I say let the culture system create itself from the grassroots and not this top-down steering.’

Inside Kunsthalle hangs the art of Imre Bukta, one of the artists who recently left the MMA. The staff members here are reluctant to talk. ‘I’m cautious,’ says one employee, who agrees to talk anonymously in the middle of the large exhibition hall. ‘Many employees are worried for their jobs; I don’t think the staff will change, only the art.’ Bálint Csaba, a young film student visiting the exhibition, does not hesitate to call the changes to the MMA ‘outrageous’. He hopes Hungarian art could still draw some inspiration. ‘Repression is good for art. You have something to rebel against. If you live in a western democracy you have nothing to talk about.’ 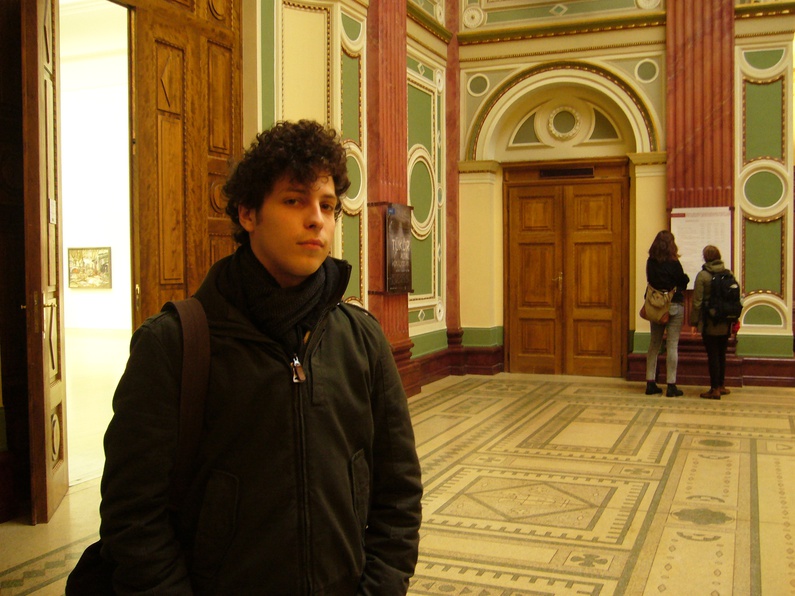 Jószef Mélyi is afraid that Hungarian artists will not feel free to express themselves, and will end up moving abroad. Outside of Kunsthalle, a tourist stops for a photo with Darth Vader before the mask comes off. Artists and art critics part ways. Next week, another pair of artists will come. 'The current system drains artists of energy,’ finishes Mélyi, and he offers a simile of Hungary’s state secretariat for culture, which is organised under the broad human resources ministry. ‘In The Matrix, human resources are robots who take resources from the humans. We are living in the Matrix.’

Special thanks to Kinga Lendeczki and Endre Orbán from cafebabel.com Budapest

Images: © Caroline Hammargren for 'EUtopia on the ground', Budapest, February 2013