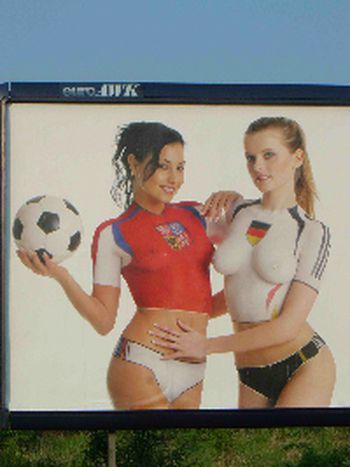 The Czech Republic is one of the teams about to start the Football World Cup on 9 June. Ahead of the tournament, Coach Brückner is optimistic: "We can be World Champions!"

Soon German football stadiums will echo with a battle cry already well-known to ice hockey fans "eši, do toho!" - "Come on you Czechs!" Even if the game with the puck is the undisputed national sport in the Czech Republic, World Cup fever has been ignited on the banks of the Vltava. Prague gave Franz Beckenbauer , president of the World Cup Organisation Committee, a warm reception at the end of January. The front pages of the Prague press honoured the event accordingly as they basked in the words of praise for the Czech team delivered by the endearingly nick-named “Kaiser”: According to Beckenbauer, the team has "the potential to reach the quarter or semi-finals and perhaps go even further."

The sweeping wave of enthusiastic anticipation sparked by the team's debut at the World Cup sixteen years ago is a cause for concern for the head of the Czech Government. Mr Paroubek is so worried about electoral participation levels in the forthcoming parliamentary elections scheduled for 9 -10 June, that he has brought them forward by a week. Apparently, Czech democracy ultimately stands no chance against the mighty empire of "Kaiser Franz" and “King Football” (denoting the importance of the game for the Championship’s hosts). “Thousands of Czechs might travel to Germany to support their team and the live coverage will keep many football fans glued to their sets” says Paroubek. The renewed enthusiasm sees the biggest corruption affair in Czech football, uncovered in May 2004 slide into oblivion. No fewer than 14 referees, 6 officials, 5 clubs and 2 delegates were implicated in the scandal, which saw crowd numbers for league games sink to 5000.

The Czechs are considered as World Cup dark horses. In comparison with the German World Cup squad in which alongside Jens Lehmann (Arsenal) and Robert Huth (Chelsea) there are only two other players based outside Germany, almost the entire Czech team consists of legionnaires. Apart from Jaromír Blažek (Sparta Prague) and Karel Poborský (eské Budjovice) all other squad members play outside their homeland. The five Bundesliga players amongst them - David Jarolím (Hamburg SV), Jan Polák (Nürnberg), Jií Štajner (Hannover 96), Tomáš Rosický and Jan Koller (both Borussia Dortmund) - may to all intents and purposes hope for support from their club fans - as long as they are not actually playing against their hosts. This mass "exodus" of the stars is perhaps one reason that clubs in the Czech league can only produce modest successes compared to other national leagues. This year’s Czech World Cup hopes draw parallels to the German World Cup victory of 1990 when players who had previously acquired valuable practice in Italy as "Gastarbeiter" played a decisive role.

The biggest Czech hope have got comes in the form of Jan Koller, top scorer in the qualifying rounds, Pavel Nedvd (Juventus), who returned to the national team for both play-off games and not least Petr ech (Chelsea) international goalkeeper of the Year 2006. They are joined by the "young bloods" such as Tomáš Rosický, with his ingenious manoeuvres in midfield, and Milan Baroš (Aston Villa), top striker at Euro 2004.

But the real superstar of the team is Coach Karel Brückner. The 66 year old is the father – the unifying force behind a team which was divided and undisciplined when he took it on at the end of 2001 and with which he remained unbeaten for two years. The constant pressing forward and precise short passing play display the high tempo football he initiated as well as his players’ readiness to run. In Euro 2004 the dynamism, variety and technical finesse of the Czech game showed itself as one of the most modern in Europe - even if they were unlucky enough to see the title ultimately go to someone else. "We can be World Champions!" announces Brückner self-confidently.

The Czechs’ appearance in Germany also brings with it the explosive, constantly refuelled historical debate about Nazi atrocities and the subsequent expulsion of the Sudetenland Germans. The Czechs has not forgotten some of notable matches of recent decades: 30 years ago in Belgrade they won their only European title against the reigning world champions, the Federal Republic of Germany, (unforgettable: Uli Hoeneß's missed penalty), at their last World Cup appearance in 1990 they were eliminated by the Germans (in the team - today's coach Klinsmann), in 1996 they lost the European Championship final in England to Germany (decisive: Oliver Bierhoff’s Golden Goal). At Euro 2004, they humiliated the German team in the preliminary rounds with a victory made by inspired substitutions, only to collapse in the semi-finals to the Greeks trained by Otto Rehagel – again, a German had played a part in the lost victory.