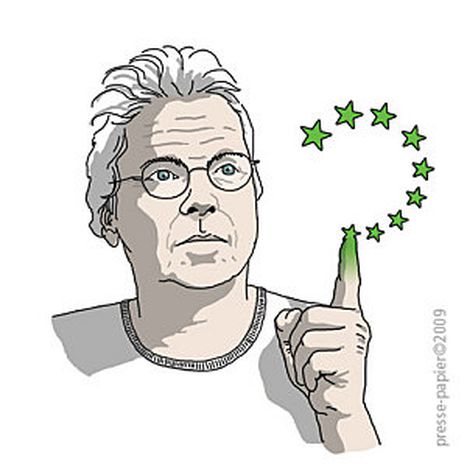 Daniel Cohn-Bendit: 'converting back to ecological ways is the only way to save jobs'

The electoral campaign of the green party has been launched. Inspired by their Green New Deal, they want to transform industrial, housing and agricultural worlds in the short and the long term. For the French-German MEP, this will not be pleasurable

'I prefer to be an ‘old kid’ than an ‘old has-been’,' Daniel Cohn-Bendit explains when confronted by critics of 'Danny the red' and the criticism they speak upon his political family, the European greens. The co-president of the European green party is also its leader. Without issuing a rally cry, Daniel Cohn-Bendit amassed a large mass of militants from all over the continent to take part in an ecological conference, held in Brussels in March to raise the anchor of his vessel, the 'green', with a view of harbouring it in the European parliament after the elections on 7 June. 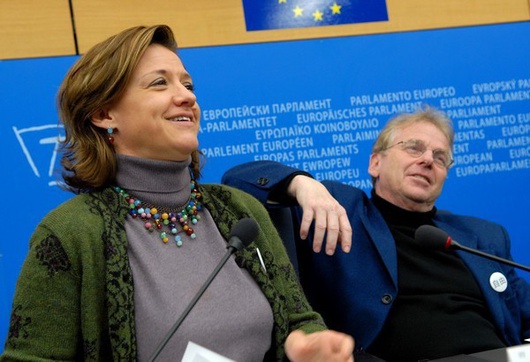 'I beg your pardon,' the German excuses himself as he jumps from one language to another mid conversation, 'but unfortunately I will not be able to travel to all of the countries to campaign with all of you.' The only ones who can criticize this comment is the French camp where he is head of two lists for the greens in the Ile-de-France region, because he will have to leave its borders to visit at least a dozen European countries to support his colleagues. 'The greens’ programme is founded upon two pillars,g Cohn-Bendit claims, 'the immediate, like our employee allocations ('allocation d’existence') for example for those who have lost their job or are being trained for another job, and the long term so that the industrial chain is ecologically compatible.' Interview.

What difficulties have the greens faced during this mandate that is coming to an end?

The big coalition between the party of European socialists (PES) and the European people's party (EPP) which has blocked the European parliament. We are starting to see this in Strasbourg too. We voted upon the resolution to aid the automobile industry in Europe yet there was no environmental conditions attached. The big forces do not think of the future.

Is there an alternative to this big coalition PES-EPP?

It is hard to tell. First of all, it is essential that an alternative has substance and that Europe invests in this ecological transformation. This is not just about cars. All of the European habitat must be transformed in such a way that we consume less energy. Finally, we must invest in a more biocompatible form of agriculture; if you transform agriculture you also create more jobs.

How can you reconvert the automobile industry without making too many more people unemployed?

Even before the financial crisis set it, there were hundreds of thousands of cars made in Europe. Ecological reconversion is the only way to save these jobs but a section of these workers will need to be retrained for other jobs because you will not be able to maintain these jobs in the automobile industry. If you say otherwise you are lying to them.

Do you seea positive model for the EU in the Obama plan?

Yes, especially when it offers aid to industries with the condition that they reform…

Should we look towards increasing the European budget to ensure that we can give such a plan the means of putting it into practice?

Of course! We are currently 27 states with a budget big enough for only 15. But equally we need a large loan to kick start this European recovery programme. Allow the European central bank and the investment bank permission to dip into the European coffers.

During your mandate you have pressured the commission to always put the fight against climate change first. Why then launch the campaign 'Stop Barroso' today?

Because when the commission announced its climate package with a proposal to reduce the CO2 emissions of cars, the commissioner for enterprise and industry Guenter Verheugen called a press conference five hours later to say that this would not work for the German automobile industry. And what did (commission president Jose Manuel Durao) Barroso say to this? Nothing. That there is the problem.

Do you prefer a president of the commission to have his own agenda, someone like Jacques Delors, someone who knows how to get his own way?

Ah well it was an easier time for Delors. The problem is that Verheugen says one thing, (internal markets and services commissioner Charlie) McCreevy says another and then what does Barroso say? Nothing. This commission is deregulating, and at the moment when this deregulation goes to the wall, Barroso is incapable of regaining order in his commission and making it act as one collaborative unit.

Certain militants say that you should not focus on this anti-Barroso campaign but rather on socio-economic proposals, what do you think of this?

In a debate, if you focus on the socio-economic problems then you have to ask the question who will tackle the policies. Barroso is the representative of a policy that I reject. An election is also the type of governance they want.

Why are the greens not presenting a candidate?

We believe that it is the role of the strongest opposition to present one.

The socialists could present (Danish socialist) Poul Nyrup Rasmussen as a candidate. Would you support him?

Yes but also one against Barroso!

What are the qualities the next president of the commission must possess?

Hans-Gert Pöttering, the president of the European parliament, wants to advance discussions on the constitution of the new parliament to approve as quickly as possible the nomination of Barroso: are you going to try to stop this process?

We will be arguing against this while trying at the same time to mobilise an alternative majority. It all depends on the majorities that will become apparent after the elections. In today’s crisis, I do not see the right-wing fairing well in the polls.