Monotheism may still reign in Cyprus, but that isn't the case for Limpia. Here, polytheistic Cypriots gather to worship Dionysus. Between sacrifices, the Golden Dawn party and Zeus, this small village has a lot of thunder.

In a small village situated 30 minutes from Nicosia called Limpia, which sounds a lot like ‘Olympia’, lies a temple dedicated to the Twelve Olympians. Georges Constantinou, a 43-year-old hairdresser, built the temple himself on his own land. In between a pasture and a wasteland, the view is surreal. Shining atop the temple in broad daylight are the words “ΕΛΘΕ ΖΕΥ ΒΑΣΙΛΕΥ ΘΕΩΝ ΑΡΙΣΤΕ ΗΔΕΕ ΜΕΓΙΣΤΕ” (meaning “Come Zeus who is the greatest of kings, the most perfect, the most gentle”) carved in red. Georges hasn’t entirely finished building the temple. He proudly shows an image of what will soon be a mosaïc depicting Dionysus on his iPhone. The 12 pillars that hold the temple represent six goddesses and six gods, even if up to 30 000 gods are worshipped, according to sources. In the middle of the temple is an altar that serves as a kind of sanctuary. Hellenic Neopaganism, Pagan and Polytheistic are the terms associated with this religion, but Georges prefers to be called a “Greek national from Cyprus”.

In Cyprus, as is the case with Greece, about a thousand people believe in a nostalgic and distant past: a time where we dedicated a cult to the power of the Twelve Gods. Although the separation of the church and the state didn't take place in Greece as it did in Cyprus, the subject is still taboo. This is why many young polytheists and other high-ranking people in Cypriotic society, such as senior army officers, want to keep their anonymity out of fear of being fired. An official organisation called the Supreme Council of Ethnic Hellenes was created in 1997 in Athens, and aims to get the religion officially recognised. "We are still a theocracy like Iran and Turkmenistan," Georges claims. "I find it scandalous that tourists have to pay to visit archeological sites, whereas I see them as sanctuaries." This could lead us to think that his temple has been built illegally, but in reality there's nothing fraudulent about it. Georges made a request to the state so that his temple could be recognised as a cultural structure. 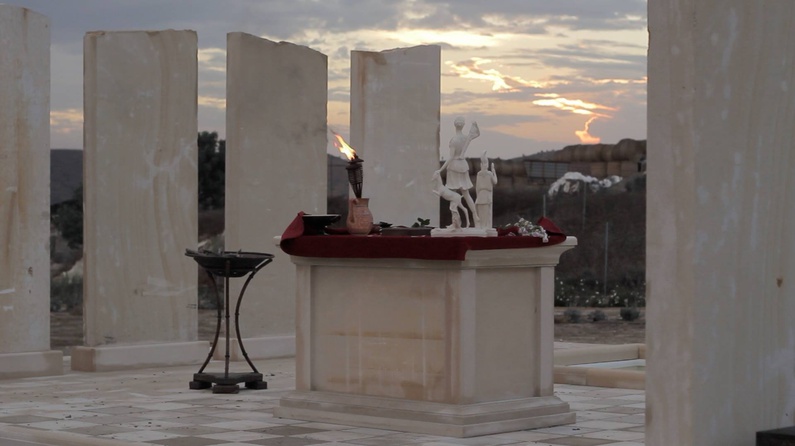 Having been baptised, Georges had a traditional Christian wedding. After having leafed through the magazine Epanellinisis [NB. meaning 're-hellenisation'], he noticed a few things. "Everyone can become a Greek national, we don't want to impose anything on the individual, we don't ask them to join our religion, for example," he insists. Since that moment, he hasn't stepped foot inside a church or celebrated Easter–a holiday that is important to Catholics. "Christianity has destroyed everything. It was imposed on us and mocks us," he admits. Georges is actually referring to the time where the Roman Emperor Theodosius I reigned, between 379 and 395. The emperor converted to Christianity and persecuted pagans, idolisers of Antiquity. Under Theodosius I, Christians wanted nothing to do with antiquity and Paganism. According to some historians, Theodosius I was the forerunner of the Byzantine Empire.

Georges is a part of the cult group called "Μόρφω" [NB. "beautiful" in Ancient Greek], who gather 12 times a year to organise ceremonies and respect a very rich calendar. According to their official almanac, every festivity is linked to the ethical practice that relates to their god's qualities. For example the month of July sees the start of the zodiac sign Leo, and is the month in which Zeus dominates, so virtues of justice and good social order are practiced. Each god has their own hymn. "Our cult connects us with our ancestors, and that's why every participant is a saint," Georges explains. For the Greek nationals, the word "god" doesn't mean the same as it does in monotheism. For them, gods are entities, they form a whole. For them, ancestors play a huge role in their religion. "Why is the dominant religion in Egypt Islam, when their ancestors are Anubis, Isis and Osiris?" shouts Georges.

"Death is a part of nature"

As with any religion, Greek Cypriots have their rituals. They dress in togas like the Ancient Greeks and place milk, honey, wine and flower crowns on the altar as an offering, lifting their arms to the sky and praying to the gods. When thinking of polytheists, we often think of meat sacrifices the ancients would give but Georges smiles: "Nature is the crux of it all, we don't make animal sacrifices." They don't have a bible and are not represented by a prophet, but their scripture is the 147 maxims carved on the Temple of Apollo at Delphi. 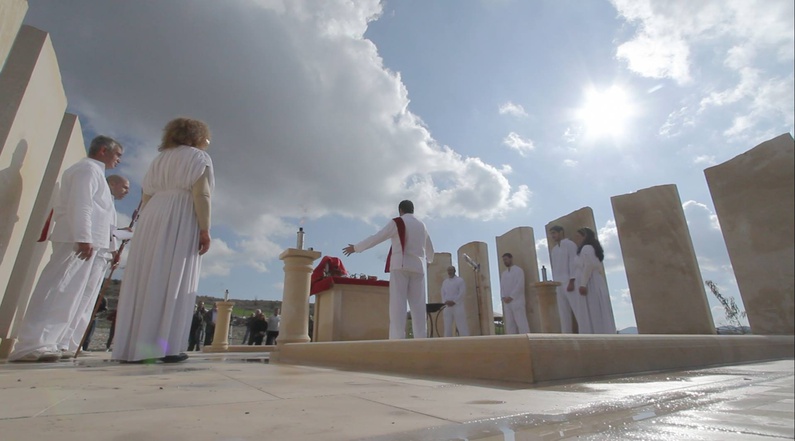 Needless to say, philosophy plays a big role in their religion. The meaning of life, death and love is not the same as in Christianity. For Georges, "death is a part of nature. We shouldn't see death as something scary, the way it is depicted in Christianity. What happens after death is a philosophical question." Georges expresses himself in Greek with hints of Ancient Greek: "What interests us is the most perfect and excellent life." For him, "Christianity transformed values into shame. Sex is still taboo, whilst in ancient Greece that was not the case." In the end, polytheism doesn't impose rules on one's daily life, but merely gives suggestions to practical questions using ancient Greek philosophies.

It's for this reason Hellenic Neopagans are sometimes linked to nationalist parties, like the neo-Nazi Golden Dawn party in Greece. Why? Because they use the same ornamental pattern called the "Greek key pattern" and also love the ancient Greeks. "This is the label Christians want to put on us. We don't have anything to do with political parties," Georges assures. The orthodox Cypriot priest Constantinos Kyriakides understands atheists and other religions. But for him, studying the works of Cicero or Confucius or a Greek tragedy is not the same as loving Apollo or Dionysus 15 centuries after their disappearance. "The resurgence of ancient religions in nationalist slogans vary–I admit that it's a bad habit–and their aspirations are entirely foreign to the culture and spirituality," he insists.

But for Georges, being a Greek Cypriot is more than a religion, it's a way of life. A perpetual search for ancestry and the meaning of being Greek. But first, he's going to have to roll up his sleeves and finish this mosaïc that will bring the finishing touch to one of the only temples dedicated to the Greek Cypriot gods.