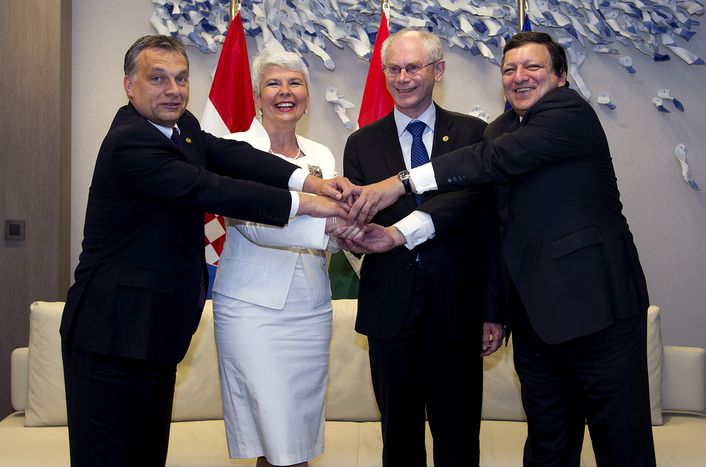 A clear majority of Croatians voted in favour of EU accession in a referendum on 22 January. However, if they want to join the EU it's above all for economic reasons, European commentators write and prophesy that the EU's eastern enlargement is over for the time being

The Croatian Yes to the EU has more to do with economic pragmatism than genuine conviction, writes the Swiss liberal-conservative daily: 'In the traditionally sceptical Croatia EU membership is no cause for euphoria. The approbation at the polling booths has far more to do with the lack of better alternatives. The country has been badly hit by the economic crisis and hopes for generous subsidies from Brussels and urgently needed incentives for its sluggish economy. The government painted a dire picture of the consequences of a No: foreign minister Vesna Pusic prophesied a downgrading of the country's credit rating, higher financing costs, less investment, more layoffs and a threat to future pension payments' (Thomas Fuster)

'No other Balkan country will be able to follow crisis' - Hospodářské noviny, Czech Republic

Croatia will be the last country in the Balkans to join the EU for some time to come, the Czech liberal business paper comments: 'One thing was clear before the votes were counted: the public system in Zagreb is rife with corruption. Numerous criminals from the war in ex-Yugoslavia are still on the run. However, there is a second piece of news that is no better than the first: if Croatia becomes the 28th member of the European union in the middle of next year this will end the EU's successful expansion to the east and south for an indeterminate period. Because if the current crisis doesn't end soon no other Balkan country will be able to follow Croatia's footsteps into the EU' (Adam Černý)

A majority of Croatians have voted in favour of joining the EU, but the turnout was under 50%. Enthusiasm for the European project is still lacking, writes the Slovenian left-liberal daily: 'Yesterday's Yes was a historic landmark, but the new government still has plenty to do before its actions can be called historic. It must implement the necessary reforms which the EU has turned a blind eye to during the accession negotiations for strategic reasons. The people themselves have already done the groundwork: they have elected a euro-friendly president, voted out the [right-wing conservative ruling party] HDZ and voted in a pro-European government. Yesterday a further European cornerstone was laid. But the goal will only be achieved when the people are better off and really do believe in the European project' (Rok Kajzer)

'Door will never be open for Serbia' - La Stampa, Italy

Croatia's likely accession to the EU is a slap in the face for the Greeks, writes the Italian liberal daily: 'The endless contradictions of the unfortunate situation in Greece for instance, which tend to be overlooked. Greece is not only the problem child of the monetary union but also a relevant part of the Balkan peninsula. We tend to forget that Athens' foreign policy conflicts not only with that of Berlin and Brussels as regards finances, but is also problematic vis-à-vis Macedonia and Albania for historical reasons. Many Greeks accuse Europe of wanting to chase Athens out of the eurozone while at the same time courting Skopje and Tirana. The case of Croatia is for many nationalists and pro-Serb Greeks the height of injustice. Because Brussels is holding the very door wide open for Croatia that perhaps will one day be closed on Greece and will never be open for Serbia' (Enzo Bettiza)