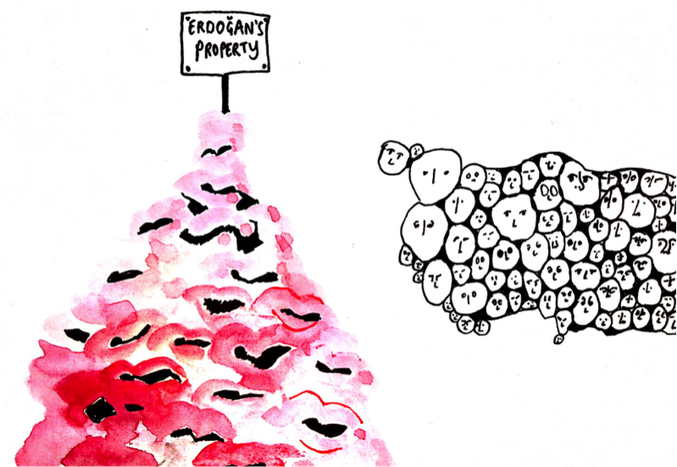 I looked around at my surroundings: translation booths surrounded the conference room, few of which were occupied, ahead of me was an elevated table with 6 speakers eager to begin with an audience of barely 10 journalists, this was the press conference for “Media Censorship in Turkey” in the European Parliament.

The speakers were made-up of 2 MEPs, from the Leftist bloc, and 4 Turkish journalists who had lost their livelihoods due to the on-going counter-coup in Turkey. Since the attempted coup d’etat in July, 170 media outlets have been closed with 105 journalists arrested, justified under the state of emergency decree. Amidst my scepticism of the European parliament, I was pleasantly surprised, that MEPs acknowledged calls made by Mr Demiralp (an impassioned Turkish journalist) about the complicity of European governments in the latest shutdown of the Med Nuce news channel. The MEPs concluded the conference with a renewed commitment to block cooperation with the Turkish government (on the refugee influx) until censorship and human rights abuses were addressed.

The purge, the post-failed coup Turkey

Despite my initial excitement, two weeks later I remain sceptical of the MEPs commitment to Turkish journalists. Why? Because Turkey remains an important ally for the European Union, vis a vis the Refugee deal (officially a statement) in March this year, or indeed the very fact that Turkey is still recognised today as a ‘stable’ state in the region. And yet since the attempted ‘coup d’etat’ on the 15th of July in Turkey, a crackdown has witnessed the removal of (at least) 6000 armed service members, 9000 police officers, 3000 judges, 1500 university deans and 21000 teachers from private institutions. These are just the statistics: stories of travel bans, intimidation, and torture are amongst the personal accounts I have heard. The latest, the oldest secular newspaper in the country: Cumhuriyet, has lost another editor in chief to censorship. Murat Sabuncu, along with nine other journalists has been detained by Turkish authorities. Critical media however continues in Turkey, resilient in the face of oppression; Cumhuriyet prints newspapers with blank columns, in protest against arrested and fired journalists.

Censorship in Turkey is not new: Reporters Without Borders have long acknowledged Turkey as the world leader of imprisoned journalists. Both Turkish and foreign journalists working within Turkish borders have been silenced by prison sentences, some as much as life. Aside from media, the arts in Turkey reel under similar pressures of state censorship, the most high profile case is the Nobel Peace Prize winner Orhan Pamuk, who was in court for uttering the words Armenian Genocide.

Waiting for the European solidarity

I am waiting for my government to decry the actions of Erdogan, to congratulate the Turkish journalists (and countless other civil servants) who resist the censorship and wider counter-coup. I yearn for the European powers to position themselves in solidarity with the people of Turkey. The European Parliament statements are empty; when metaphors about crossed red lines are long repeated, and actions are lacking. Am I exaggerating?  Since my visit to the European Parliament, Can Dundar, the former editor in Chief of the same Cumhurriyet newspaper, was nominated (he did not win) for the 2016 Sakharov prize for protecting freedom of thought in Turkey. The nomination symbolises the recognition of the feats of Turkish journalists by the European Parliament. But, a nomination to an exiled journalist has limited meaning on the ground, when European powers are complicit in closing down Turkish channels broadcast on European soil.

This article presents only one snapshot in a series of unfolding events in Turkey, media is not the only sector to be attacked after the attempted coup d’etat, judiciary and education have also been seriously undermined by censorship and state terror. The media sector however, has gained more international attention, such at the European Parliament. Subsequent to my visit the European Parliament has again pushed the case of censorship and media freedoms in Turkey, but beyond press conferences, nominations and debates, little has come out of it*. As citizens of Europe we should question our governments’ lack of action: why are they standing by as Turkish media is censored out of existence?

If the complicity continues, we in Europe should remember the role we have played in the silencing of Turkish journalists.

*Update: Since this article has been written, MEPs (in the European Parliament) have adopted a resolution calling for the suspension of negotiations with the Turkish government until the government ends it’s "disproportionate and repressive measures" in response to July’s failed coup. I should emphasis however the European Parliament's resolution is not binding and the ultimate decision lies with European government's. Thus this update reveals a push in the right direction in terms of rhetoric but remains miles away from the reality on the ground in Turkey.