Copenhagen: As the wind picks up, the world slows down

In the Bay of Scanport, just a few kilometres from central Copenhagen, an old 25-metre sail ship named Hawila sits moored. While waiting to haul anchor and head out to sea, a group of passionate young activists work on its restoration. Their idea? To slow life down a little and urge the world to take a different approach to consumption.

From the Hawila, one can see airplanes taking off and landing at the nearby airport, starting and ending journeys from all over the world. Situated on the edge of the Baltic Sea, the view also includes cargo ships gliding past on the waves, transporting thousands of containers. This spectacular wooden sailing vessel is moored in an old industrial zone. With its pirate ship vibe, Hawila seems to come straight out of another time, nestled between the assorted modern pleasure craft.

On this late March afternoon, a cold wind is inviting us aboard. The ambiance is peaceful. In winter, the wider community working on the Hawila project disperses and only gathers again as the summer months arrive. Passing travellers come to spend one or two nights. Just recently, beds were rented out on AirBnB, which allowed for the purchase of extra building material and maintenance work.

According to Samuel Faucherre, one of the masterminds behind the project, what I'm currently seeing is just the calm before the storm. In summer, cultural activities are organised on board the ship and in the surrounding area. Shows, festivals, workshops... Hawila is transformed into a place to gather, to share, and to increase one's sensitivity to environmental issues. Volunteers also come to repair the old ship, with the aim of starting to transport merchandise between northern and southern Europe by 2017, using only the power of the wind in the sails.

Resurrecting a forgotten mode of transport

Constructed in 1935 to carry huge blocks of ice, this dual mast sail ship, forgotten by her last owner, has recently been resurrected. Bought in January 2015 by her current crew, for the princely sum of one Danish krone, Samuel and his team want this project to propose an alternative to traditional marine transport methods.

"Today, 90% of products found in supermarket across the globe have at some point in their production line been shipped,'' Samuel explains. This native Breton, 29 years old, is a sailor and scientist, specialising in the Arctic. He goes on to say that the 15 biggest container ships combined pollute the same amount as all of Earth's cars. 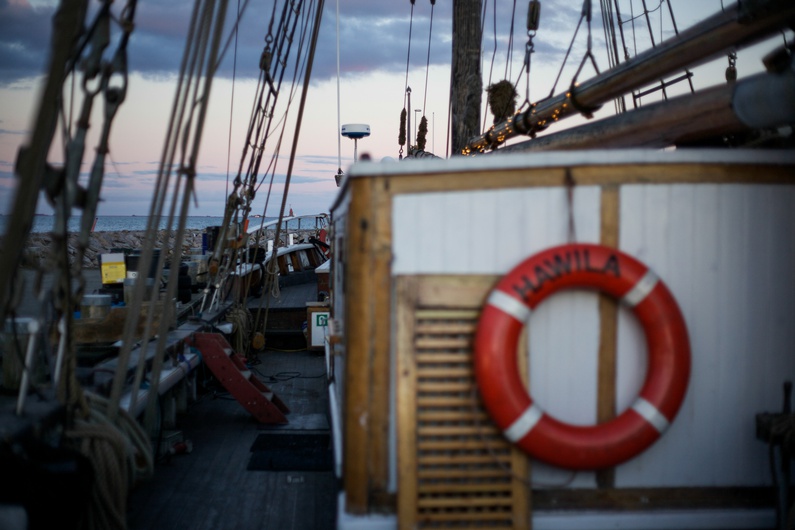 Instead of rapid transportation methods that allow goods to be carried across the planet in record time, and at low cost, the Hawila project chose to resurrect a slower, cleaner and forgotten form of transport. Sam specifies, "We want to work with local producers and small coastal communities, not to enter into the mass production market." Chocolate, olive oil, coffee, rum, cider... these are the kinds of ecological products they are seeking to carry in their cargo hold.

Thinking outside the box

There are just a few short, narrow steps down into the ship's hull from the kitchenette, filled with the aroma of coffee. This is where we find the ship's mess room, a common space also serving as a dormitory. There are roughly 20 bunks and a long wooden table, which is placed in the centre of the room. The light is dim. Guitars and old pictures of the Hawila decorate the walls.

Whilst on board, the young people involved in the project share their daily life as a community, thinking "outside the box". They are, for the most part, young Europeans with a background in marine biology who have completed qualifications in the sciences, technology or artistic fields. They are looking for the kind of lifestyle that's the polar opposite of our hyper-consumerist society. They are more frugal. They practice dumpster diving. They also want to experiment with full self-sufficiency, both in terms of food and energy. Sam is hoping to install wind turbines on the ship's stern along with solar panels designed to provide on board heating and electricity. With a hat on his head and a striped shirt on his shoulders, this young, eccentric scientist discusses his need to keep on experimenting. He'd like to make extra space for a greenhouse and chicken coop on board.

Gabriele, originally from the Italian coastal city of Palermo, has been a keen sailor for several years. Nepal, Cameroon, Malaysia... this trained 28-year-old agronomist is well travelled. Back in Copenhagen for the summer weather, he's particularly interested in the possibility of using this project to explore new ways to work, share and live together. "Living on the ship allows a lot of freedom. We don't have particular rules or limits," he explains. "But at the same time, each individual must see to their own responsibilities otherwise the ship doesn't work."

On another morning, Gabriele, with frizzy hair and three days of stubble, is installed on the ships prow. It's a little chilly, but people are still asleep in the mess room. "When living in a limited space and learning to share, it's vital that one sets ego aside and learns to listen to other people," he explains. He hopes to create an inclusive platform, founded on the basis of equality, where individual's ideas can be properly expressed, and where everyone works at the same level. 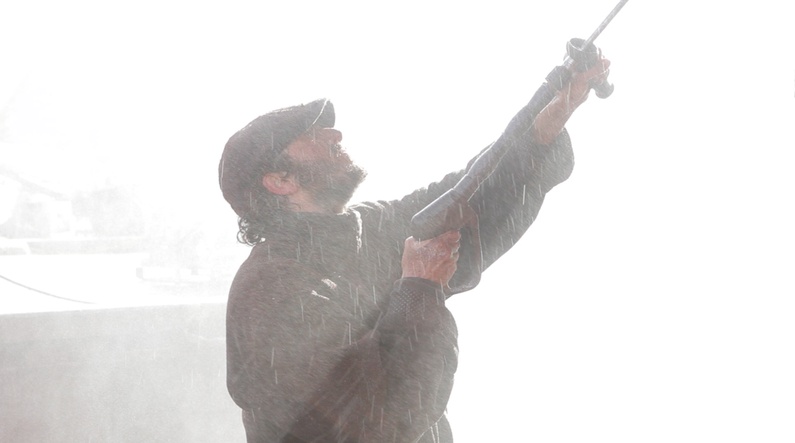 Everyone on board Hawila is a volunteer. Gabriele makes it clear that profit is not one of the project's objectives. Wanting to stay independent, the team chose to self-finance. ''I want to say we managed it, that we made it on our own,'' explains Sam with typical outspokenness.

During his time spent researching in the Arctic, Sam saw first hand the impact humans are having on the environment. Disappointed in policy makers, he figures there's not much to expect from them when it comes to doing something about the climate. "During COP21, I had a little hope. I thought something would happen, but it was bullshit. Politicians only think about their careers."

According to the young sailor, "solutions must come from the bottom up." This is how the Hawila project emerged. "Personally, I don't want to simply live, consume and then die. Maybe this project won't lead to anything, or maybe it will just be a drop in the ocean, but at least I've tried something." 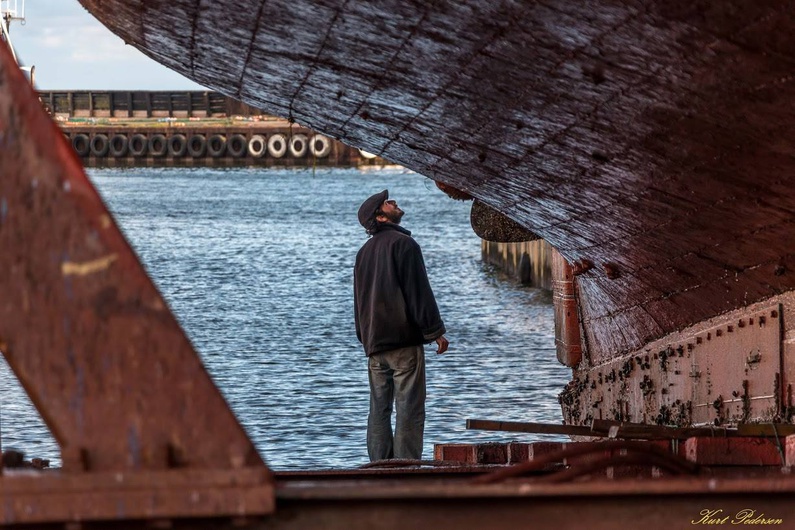 Alina arrived in Denmark in 2009, and spent several years participating in an Eco village project before getting involved with the Hawila. For this 29-year-old Belgian Romanian, who grew up in the United States, one of the Hawila's biggest strengths comes from its emphasis on sharing among a group of people from all over Europe. Alina sees this diversity as a source of inspiration. "It allows us to enrich one another," she explains. "We've more power working together as a group on a local level than we do fighting individually against a policy-making system that's far away from us, and that's too difficult to understand or to influence."

Going from port to port, the crew of the Hawila want, through diverse artistic and cultural events, to sensitise people to the environmental consequences of traditional marine transport, while proposing alternatives. To be financially sustainable, the team also relies on finding free mooring at the ports they visit.

This feature report is a part of our EUtoo 'on the ground' project in Copenhagen, seeking to give a voice to disenchanted youth. It is funded by the European Commission.