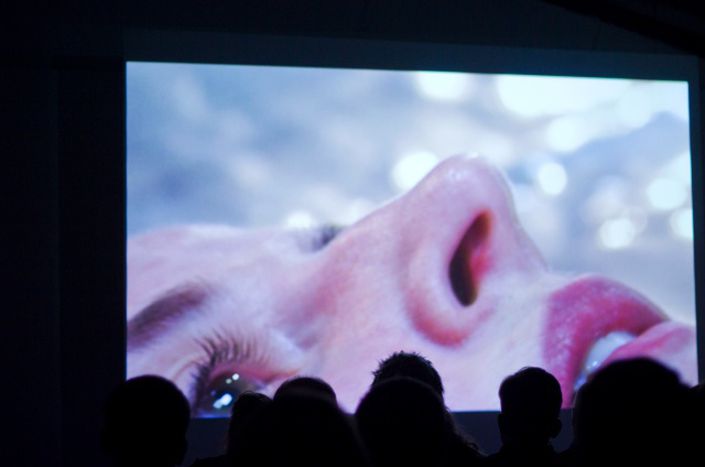 When I ask visual artist Catherine Street how I should persuade a friend to come to her show Continuum at the Edinburgh Art Festival, she lets out a burst of genuine laughter, before exclaiming ‘That’s a difficult one!’

The show, an intermedial evening of film, live readings and improvised music, grew out of a commission for the Human Race project, a Scotland-wide touring exhibition based on the theme of sports medicine, and is the culmination of over a year and a half of research. Catherine had worked on themes of endurance and the relationship between body and she developed these themes with Continuum, looking into how and why athletes push their bodies to limits.

‘I started off just talking to people,’ Catherine explains, ‘and a lot of athletes talked about the sheer amount of time that they put into training and the intensity of repetition, the way they focus on very, very tiny things over and over again. One psychologist I spoke to who had been a snooker player remembered setting up the same shot and playing it again and again and again over several hours at a time.’ I think how excruciating simply watching five minutes of snooker can be… That sounds like torture. ‘Yeah, a lot of it is really extreme!’ Catherine remarks with something like wonder in her voice. ‘To be honest, before I started doing this project, I really wasn’t that interested in sport. Yet some of these things these people said about training do sound like torture. That’s the thing that really fascinates me, the willingness to do that, and to put yourself through that. Once you get behind the sort of Olympic glamour, the actual experience is quite extreme. One cyclist I talked to had known an athlete die on the tracks from pushing himself too hard. You don’t see that darker side.’

The show explores this concept of intense repetition, with the texts written and performed by Catherine and the Edinburgh-based poet Jennifer Williams developing ideas of aesthete monks and the extremes of repetition. ‘I saw Jennifer perform a piece of her work and her delivery was just incredible, really emotional. It was very different to the way I would present something and I thought, ‘I want to hear her read something of mine,’’ although the two will be reading their own works on the night.

Catherine admits that this interweaving of different art forms and different media has been a challenge. ‘It’s an experiment!’ she laughs. ‘But that’s a massive part of my practice, not having one discrete thing, but having different things related to one another.’

This combining of elements goes further than the simple mixing of different genres, with various projects Catherine has worked on reflecting on the way we perceive the human body in different forms. ‘I’m quite interested in contrasting the body on film with the live body,’ she muses. ‘I did this film in which I was breaking down a wall, which is a really physical thing. Then when I presented it I was in the space as well but just as an object lying down on the floor. So it contrasted the very physical active body with an inert one. And I once began a performance lying on the floor and people had to step over me, so I was just a physical presence in the space. Then I got up and start reading.’ She grins. ‘I’m really interested in the body as a physical object and then a speaking thing.’

This contrast is strongly developed, perhaps unexpectedly, in the live music by Martin Parker and Owen Green which is a part of Continuum. ‘Both Martin and Owen’s performance, particularly Martin’s performance is very’ – she pauses, grasping at air with her hand – ‘physical. You get the sense of the music being produced. That was something I liked when I first saw it; it makes you think about the actual physical stuff of the music, rather than the meaning. I saw him perform at a performance festival in Prague and he was using jam jars, kind of forcing the sound out. He was standing there with his arms out like this’ – she gestures again – ‘almost like a priest. It’s really very intense.’

So why should you come to see Continuum? Catherine considers. ‘I want it to be an experience that’s quite intense, that’s quite emotionally affecting in a way through the atmosphere of the thing.’ She shrugs, and laughs again. ‘I would go to see something like that.’

Continuum will be performed on 8 August at New Media Scotland in as part of the Edinburgh Art Festival.