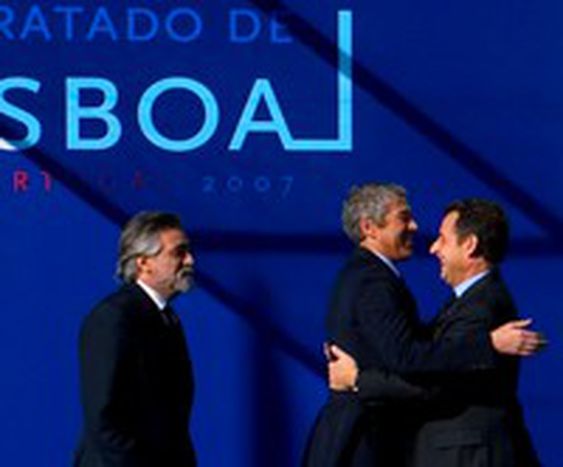 Constitution tension ... in a Finnish sauna

The Lisbon treaty established a legally new European Union when it was signed by twenty-seven member states on 13 December 2007. 2008 will be a tense year, as it awaits ratification from all the member states for it to be able to be in place by the beginning of 2009. We head to a hidden sauna in the depths of Finland, where a group of young Europeans gather together for a social activity as part of their month long journalism programme adventure. Days before the treaty was signed, their thoughts and actions are allegorical of the moment itself on 13 December.

... Glances all round as we tentatively consider getting naked together. A wall of cold air swirls through the room as the door opens to welcome the girls, tip-toeing across the hot floor to find seats on the upper bench. For a moment, everyone sits in silence, breathing in deeply. Slovene Lana takes the ladle from Portuguese Ines and sprinkles water on the coals. Billowing steam rises through the air to mix with the words that began to flow between us. Someone mentions the Reform Treaty.

What is the Lisbon treaty really?

'It’s just a redressed constitution,' mutters Lars, sipping a beer – the Dutchman says. The newly named 'Lisbon treaty' replaced the 'European constitution', which was rejected by his countrymen in 2005, along with French voters like Cedric, who nods in agreement. 'It doesn’t replace any of the earlier treaties, like Maastricht or Nice. It just amends them slightly.' In the steamy room, Franz the German coughs in agreement with two, whilst Irish Cian offers some extra clarification of what the new treaty will bring. 'Like a new sort of leader, it will combine the post of Foreign Affairs and External Affairs commissioner.' 'The High Representative of Foreign Affairs,' Franz finishes for him.

Karol, the enthusiatic Hungarian, is first to protest; indeed, the Hungarian parliament were among the first to approve the Lisbon treaty after it was signed on 17 December. 'Our own governments are still in control of areas like defence and foreign policy,' she explains. 'The Lisbon treaty is just a further step in continued integration - everything the European Union stands for.' 'And you can opt out of any part you don’t agree with,' her Slovenian neighbour Lana nods. Her country have just taken over the EU presidency for the first six months of 2008, and expressed hopes that the treaty will be ratified by the year's end.

Alina, the Pole, coughs loudly from where she sits on the upper benches. 'Poland isn’t signing the EU Charter of fundamental rights,' she announces. Along with the UK, her country asked for an 'opt-out' of this charter, so that it is not legally binding in Poland.

'That’s unbelievable!' pipes up Isabella. The Italian, whose country are very pro-treaty, believes that 'we are supposed to be moving forward together. It’s not in the spirit of the EU to pick and choose like that!' Alina glares, 'but it contradicts national Polish law!' Her point of view is reinforced by the statements of the Kazynski brothers, whose Law and Justice party headed Poland at the time, and felt that the charter infringed on their view on issues such as euthansia and homosexuality. But Isabella storms out of the room: 'It’s obvious that it's about sexual discrimination!' Gasps all round, as the others realise that the door has been jammed shut.

Stunned silence holds the air, before a cacophony of voices drown the sizzling embers of the fire that everyone is hurriedly putting out. A soft click, and the door is pushed open by a fully-clothed Ben. The Englishman lets pure, fresh air sweep through the room. A sweetly allegoric moment; British prime minister Gordon Brown himself showed up late to sign the Lisbon treaty on 13 December. 'Just in time, I guess,' Ben smiles, raising an eyebrow.