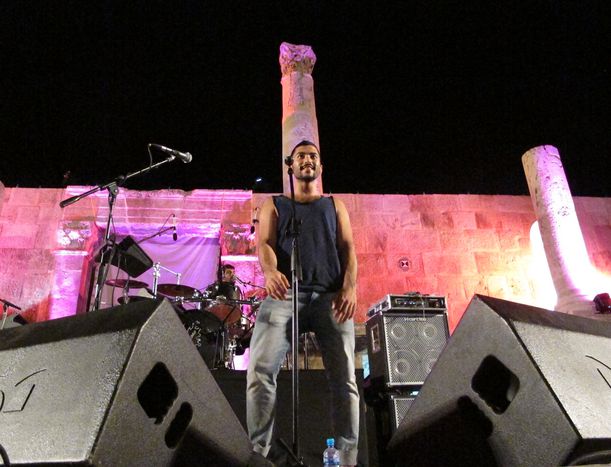 If you believe in reincarnations, you would swear that Freddie Mercury now resides in the body of Hamed Sinno, the charismatic and openly gay lead singer of the Lebanese indie band. The name of the seven-piece from Beirut translates literally from the Arabic to ‘An Overnight Project’

It is a chilly evening at the Roman Amphitheatre in Amman. Hamed Sinno reigns the stage, as if it was his very own private studio, fuelled by passion. He creates an intimacy with every single person in the audience, with his magnificent voice rising up and beating down scales with effortless charm. Everything about him builds up the kind of showmanship that has almost passed from this world. 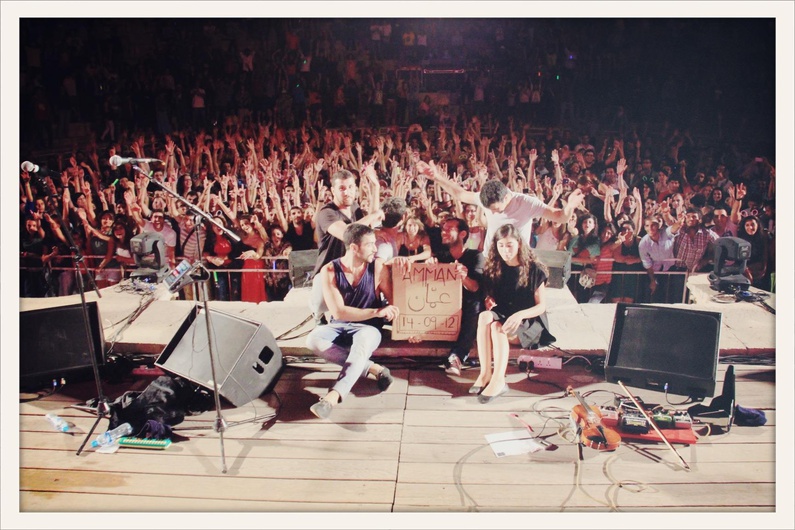 Sinno is an openly gay man, and Mashrou' Leila's lyrics cover just about every taboo imaginable: homosexual love, life in the closet, premarital sex, interfaith relationships and political and religious protest - and they don't shy away from dirty language either. In a deeply religious, macho, homophobic society, where the very existence of gays is denied, the band gives Arab LGBT youth a much longed-for voice. No wonder that their short career, spanning only two albums so far, has already turned them into global stars, with concerts in Arab and European countries alike.

However, Sinno's stage presence is only a small part of what makes Mashrou' Leila the phenomenon that it is. The band formed after meeting at the American university of Beirut in 2008. Combining electric guitars and keyboards with traditional violin sounds, their sound is neither distinctly oriental nor distinctly modern, and may call upon comparison to the Balkan rock, which took over Europe a few years ago. Nor are they a wedding band in stiff suits, or shallow pop icons – two of the images which are so prevalent in Arabic music nowadays.

The 3, 000 people at the Roman amphitheatre are a rare view to be seen in the Jordanian capital. The public sphere in Jordan is a male dominated one. Walking in Amman's city centre, you would be lucky to encounter a woman for every hundred men that cross your path. The women you do see are inevitably covered up from head to toe. Jordan's modesty rules require that every woman going outside must be dressed accordingly: trousers and skirts must be long; tops must cover shoulders, chest and elbows; no item may be skintight. The female body is to be kept from sight – and this goes for female tourists as much as for residents.

Behind the theatre's massive stone walls, however, it is another world altogether, and occasional hijabs mix in with the mass of revealing tops and tight jeans. Mashrou' Leila's crowd is as modern and rebellious as the band itself, singing the lyrics loudly when prompted. Shim el-Yasmin (‘Smell the jasmine’), a heartfelt ballad about the breakup of a gay couple as one of them chooses a closeted life with a wife and children, turns into a slow-dance for queer couples.

It is now the second year in a row that Chady Baddarni, a 23-year-old Palestinian from Tel Aviv, has orchestrated an organised trip to Amman to see his beloved band play live. What started out as just a desire to see Mashrou' Leila perform live along with a couple of friends, turned into dozens of Palestinian and Israeli youth filling buses to spend a weekend in the Jordanian capital. This year an Israeli-Palestinian after-party was planned in one of Amman's few nightclubs, Seventh Heaven. However, as is often the case with Middle Eastern politics, music is never just music. 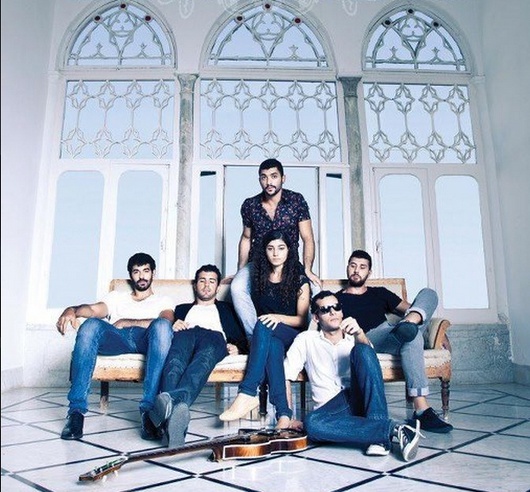 A week prior to the trip, the Jordanian popular boycott movement posted a letter on facebook addressed to the event organisers of the after-party and to Baddarni personally, going from political opposition to racism and downright threats towards participants: ‘We cannot stress enough our firm opposition to any form of political or cultural normalisation activity with the so-called 'State of Israel' therefore facilitating the visit of any zionist performer or attendee(s) to any cultural event hosted here in Jordan is entirely unacceptable,' they wrote. 'Despite your confirmation and that of your associate here in Amman, the event you're organising will not host any zionists (to be clear we take this stand against all Israeli nationality holders that are non-arab). We are very vigilant to all cultural events in Amman, and will have our ears to the ground during Mashrou' Leila, so we urge you to keep your word and promise to keep our event and country Zionist-free.’

'This year an Israeli-Palestinian after-party is planned in one of Amman's few nightclubs. However, as is often the case with Middle Eastern politics, music is never just music'

‘In two words: racist thugs,’ responds Baddarni, a Palestinian activist himself. 'This blatantly contradicts the guidelines by the BDS (Boycott, Divestment and Sanctions) movement and deals a near death-blow to the huge efforts they invested to distinguish between 'institutional' and 'individual' boycotts. Our goal isn't only overcoming zionism but also building a future after it.' Thus, one week later, I am standing in the desert air of the Roman amphitheatre, surrounded by the 111 other youths who came along with Baddarni, 29 of whom are jewish like myself. It has been a long day walking around the city, and I have spent most of it fully wrapped up under the blazing desert sun. I roll up my short sleeves and surrender to Sinno's magnificent voice.