By Aris Kokkinos The long awaited Burson-Marsteller report is an event. Given the success of the 2011 edition, reviewing the first year of Barroso II, B-M has issued a second survey. On November 13th, three panelists have delivered the primacy of their analysis: David Earnshaw, CEO of B-M Brussels, David Harley, senior advisor and John Wyles, journalist at the European Voice.

Conducted in collaboration with EurActiv, this second report includes 811 responses (322 in the first). Most of its respondents belong to the “Eurobubble”: Community and national officials, consultants, corporate representatives... 96.8% are EU nationals, 3.2% are from the rest of the world. The core target is closely linked to institutions. As stated by David Earnshaw, rather than the reviews about each Commissioner, the important element of the report is the evaluation of the overall Commission policy delivery. With only 0.9% of positive opinions against 23.1% of negative, the result is bad. Mitigating circumstance: as in 2010, the Commission is dependent on the difficult current situation. David Harley has mentioned that these negative assessments are no surprise. 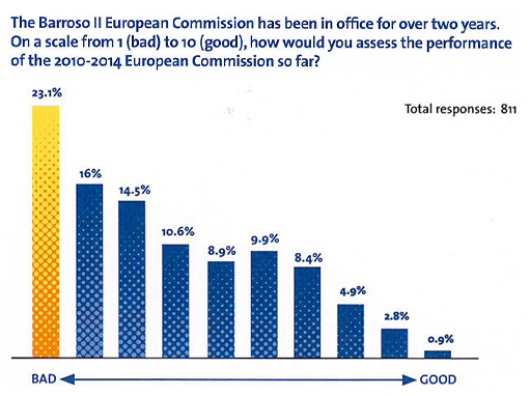 Having to cope with the teething problems of the post-Lisbon Treaty EU, Barroso II has had to adapt, among other things, to the new two-headed presidency (Council and Commission), to a reinforced European Parliament, to an omnipresent European Central Bank. Aggravating circumstance: even more than in 2010, the Commission has a huge image problem. The difference between Neelie Kroes and Catherine Ashton also lies in communication. The first, in charge of the Digital Agenda, excels in the use of social networks. The second, in charge of the newly born European External Action Service, is under fire from media critics. Other crucial teaching pointed by David Earnshaw: most respondents expect the arrival of a big hitter at the head of the Commission. John Wyles apprehends a napoleonic temptation of a part of the opinion, but the technocratic Europe, as developed by Jacques Delors, doesn't make people dream anymore. The increasing personalization of political relations, between leaders of institutions and of Member States, leads to the expectation of a genuine leadership. To the question “Who would you like to see named as the next President of the Commission?” Angela Merkel (EPP) receives 19.3% of support, Guy Verhofstadt (ALDE) 17.9%, Tony Blair (PES) 16 , 3%. To the corollary question “Who do you think is likely to be appointed next President of the Commission?” Verhofstadt and Blair are again mentioned (9.1% and 8.5%), followed by José Manuel Barroso (EPP) credited at 8.2%. 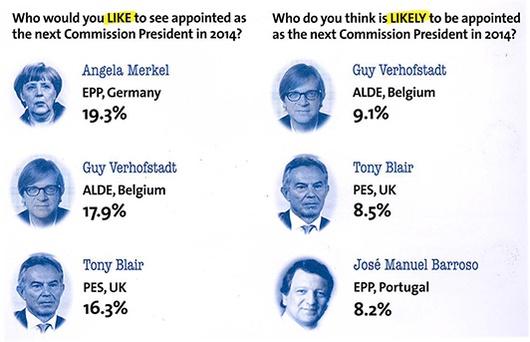 This report has no official status, but it is a thermometer of a decisive fringe of public opinion. Its findings will be widely commented in the Brussels sphere, and well beyond. The European Commission must take this into account. As the latest news reminds us, it faces hardships: the 2013 budget will be adopted through tough negotiations, the public debt expands, the November 14th’s European strike erected against austerity. There are less than two years for Barroso II to be up to the stakes, while improving its image. It is a difficult mission. The next report will tell if it is, or if it is not, an impossible one.