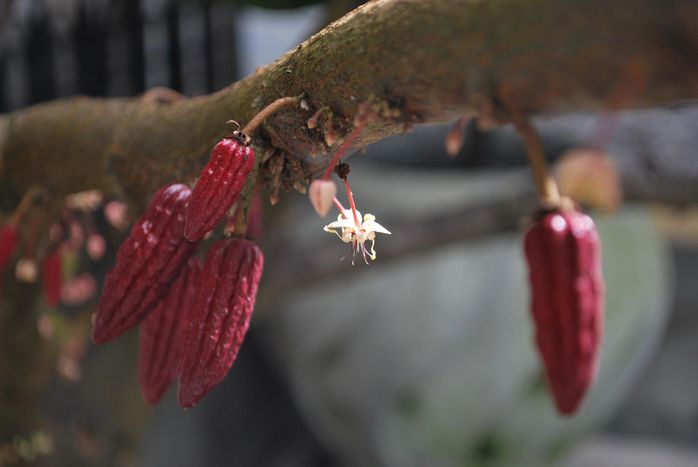 Earlier this year, the Brits went into a panic when it was announced that American food giant Kraft was going to take over the British Cadbury’s. Childhood, chocolate and cocoa in Britain and France

The first recorded instance of chocolate being made from cocoa can be found in the conquistadors’ accounts of Central American civilisations, most notably the court of Aztec emperor Montezuma. Ever since this discovery, Europe has been mad for the stuff. ‘Perhaps an obsession with chocolate had something to do with Spain’s decline in power,’ Balzac surmised. ‘They were close to establishing their own Roman Empire until chocolate came along.’

‘How lucky chocolate is! It travels the world, smiled upon by women everywhere, until it finally dies a glorious death in their mouths, melting in a sensual kiss’

It was conquistador Bernal Díaz del Castillo who suggested that drinking hot chocolate made Montezuma very popular with the ladies of his court, an idea which has led Europeans to fantasise about chocolate ever since. Until the early 1800s, chocolate was for adults only: it was a rare luxury, and its stimulant effects were thought to be useful as a treatment for anemia…and as an aphrodisiac!

Quaker oats? How about Quaker chocolate?

Luckily for young chocolate fans everywhere, European industrialists of the 1800s brought about a massive change in the way that chocolate was consumed. No longer was chocolate a beverage reserved for the rich: it became a mass-produced treat for all. Interestingly, chocolate factory owners tended to be paternalistic, operating their businesses according to Quaker values. In 1830, Antoine Brutus Menier established a factory in Noisiel, France, and became the first person to mass-produce chocolate. Menier’s factory was also remarkable because it provided housing for his employees; Menier was inspired by utopian philosopher Charles Fourier’s ‘phalanstère’, an ideal socialist community. Similar factories complete with workers’ villages were founded by Victor-Auguste Poulain in Blois, and by John Cadbury in Bourneville, a suburb of Birmingham.

The first chocolate bars were not produced until 1847

Chocolate’s positive associations just kept growing: its reputation as a health food was reinforced by the fact that many chocolate manufacturers began as pharmacists: Menier, and Swiss chocolate maker Frey, to name just two. Chocolate continued to be considered a fortifying food because it contained substances such as magnesium and theobromine (a chemical compound similar to caffeine). As early as 1662, the church had allowed its followers to drink chocolate during fasting periods. The first chocolate bars were not produced until 1847, and in the meantime, we have seen an enormous variety of different chocolates being developed, so that there’s something to tempt everyone. Still, many would argue that no chocolate bar can provide the same comfort as much a steaming mug of hot chocolate.

If anything, it’s Cadbury that makes us fall apart! For evidence we need only look to an article by Guardian journalist Jay Rayner, who was inspired by Kraft’s takeover of Cadbury’s to reflect on the British relationship with chocolate. Standing in the chocolate section of a supermarket, he says: ‘They’re all there, each one a reference point in my childhood: Topic and Bounty, Dairy Milk and Galaxy, Wispa and Twix, Kit Kat, Toffee Crisp, Flake, Star Bar, Maltesers etc.’ Of course, all of these chocolate treats contain more cocoa butter than cocoa powder, and of those two primary ingredients of chocolate, it is cocoa butter that is the most fattening. Personally, I prefer to eat a block of proper dark chocolate, at least 70% cocoa content.

Is chocolate most irresistible when combined with other foods?

This makes my taste in chocolate undeniably mature, and this is why I have a hard time agreeing with writer Tim Richardson’s theory, which he presents in his 2002 book Sweets: A History of Temptation: ‘We associate sweet treats with childhood because these are the first products which truly belong to us, products which we can freely trade and consume.’ I’m more convinced by the arguments of David Kessler, former head of the American food and drug administration: he believes that we find chocolate most irresistible when it is combined with other foods—a Starbucks Mars Bar Frapuccino, for example. So I hate to be a wet blanket, but I’m more likely to be tempted by a chocolate fondant than a Bounty bar (and I know what I’m talking about, because I’ve eaten a lot of Bounties!). So for all you kids with grown-up palates, here’s a recipe rich in dark chocolate. Go on—they say it’s good for you, after all! 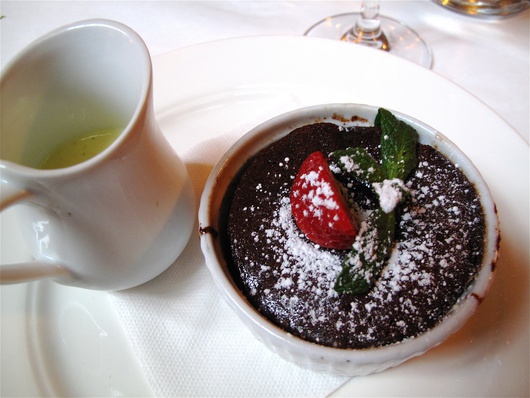 Separate the eggs, and beat the yolks with the sugar and a little water before adding to the chocolate mixture

Beat the egg whites until stiff. Carefully add to the chocolate mixture

When the cake is ready, it can be decorated with icing sugar or melted chocolate