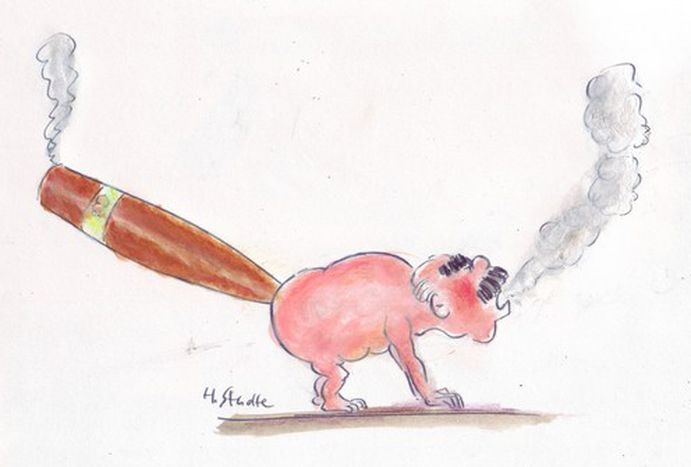 Close, but no cigar!

A stereotypical rich man's accessory, a cigar epitomises all that is classy, cool - and lucky. If you tell someone in French 'tu as fait un tabac', you're congratulating them on being hugely successful. Across Europe's tongues however, the 'cigar' phrase gradually loses its 'luck' sheen

In English it is diminished with the saying close, but no cigar! It describes a situation where you don't quite reach a goal, narrowly missing out on success and inversely, getting nothing for one’s efforts.

The phrase is rooted in history's fairgrounds, in games, in winning and losing. The context from where the phrase emerged is just as lively and feel-good; in the late 1800s the winners of 'have a go!' classic games of skill and strength would receive cigars as prizes. They had to be lucky in more ways than one though. The sly stall organisers were on hand to rig the games for more drama (and more money), enacting repeated attempts far beyond the contestants’ strengths.

And what about just handing someone a cigar, as the German phrase jemandem eine Zigarre verpassen describes? Again, it's circled around high society. William II, the last German Kaiser, would offer his officers and generals a cigar from his cigar box – but it was an unlucky sign; he was angry, ergo on the verge of scolding them. It's an expression which does the rounds even today, when an angry boss 'has a go' at his employee.

Beware of the Spanish though. They're far harsher than William II ever was. They use cigars to make threats. Meter un puro en el ____ is literally translated as 'sticking a cigar in one’s rear end'. It's delightfully wicked, as it rhymes in the Spanish, and signifies 'I'm going to punish you', or 'make you suffer'. Smoking is too cool to kill - at least smoking a cigar anyway.