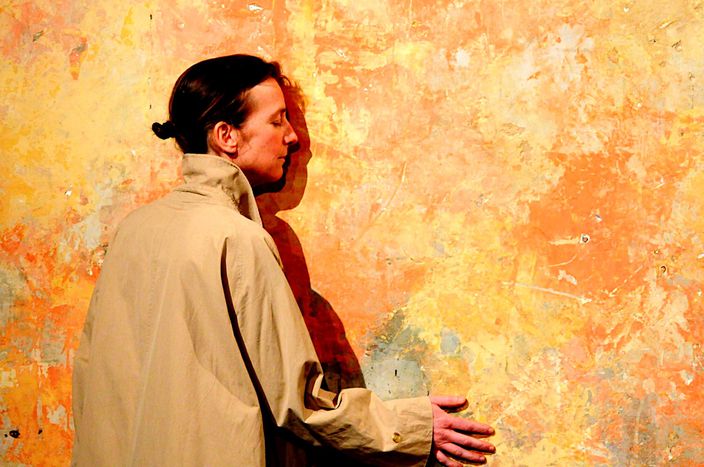 The lovemaking Swiss theatre actress is taking on a one-woman stage interpretation of a haunted figure in Prague on Parisian floorboards. She talks getting into theatre, Europe and passion

'The best cafe is Italian – it’s short, it’s delicious.’ First things first: Claire Ruppli prefers cafe to tea. Important information! It’s all in there, because the actress could easily be an Italian expresso herself: firm, determined and extremely efficient. Ruppli goes on to claim that Italian cafe tastes good everywhere, ‘whether in a restaurant, or on the motorway.’ Yet unlike the reliability of a solid café, there’s something surprising about her. She’s corseted in black leather with a light scarf around her neck, giving her the look of a semi-professional artist. But once she is liberated from her thin sunglasses, her two huge blue eyes fix on you maliciously. Claire has a lisp; you just have to listen to the reasons for her theatrical vocation before understanding that we’re about to go for a swim in the memories of her adolescence.

‘I was a good student at school, but I talked too much, I annoyed other people actually. So, I was isolated. But then an actor came in year 9 and encouraged me to read L’Imparfait du subjonctif (‘The Imperfect of the Subjunctive’) a poem by the nineteenth century writer Alphonse Allais. Do you want to redo it, he asked me, and that’s when, getting home after school that day, I realised I wanted to go into theatre.' It began spontaneously at school, and after having hassled her parents to go to drama school, Claire Ruppli ended up creating her own company, KIPRO-co, in 2000. Animated by the ‘desire to create things,’ she set off for the famed Avignon Off Festival with her troupe. 'I love the camaraderie,' she says about them. 'We’re like brats, we squabble, we challenge each other – it’s super.’ We’re interrupted by a transport worker who passes us carrying a metro sign. ‘I want that!’ she raves. 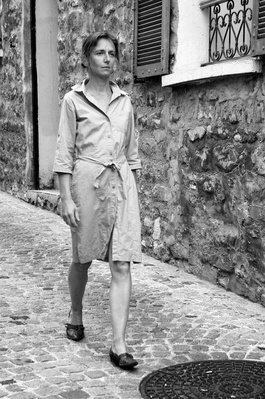 Camaraderies aside, this time around the actress has decided to interpret an eminently serious text, a philosophical novel by French author Sylvie Germain. In La Pleurante des rues de Prague (‘The Weeping Woman on the Streets of Prague’, 1993), the figure of a woman sweeps in and out of a haunted city, reminding us of the hurt and memory of its residents. Why has Claire decided to go it alone? ‘Of course this figure haunts me every evening,’ she says. ‘But the text taught me to look at the invisible. Words speak to you. It’s an emotion we feel. When I first read Germain’s text, I found it to be organic with a poetic spirit. But I’m not afraid – I’m not into pathos. It’s a play.’ Claire Ruppli’s not afraid of much. ‘‘I like challenges. Nerves are just a plus. To be honest, I prefer joking around prior to going onstage than to rehearse like a beast two hours straight just before.’

Claire is so sure of herself because she relies on a platform of knowledge which allows her to soak information up, to nourish herself. For example, she went to the Czech Republic to prepare for La Pleurante des rues de Prague. ‘Prague is magical,’ she recalls. ‘I went when it was really cold. It’s definitely a museum city but it’s also very intriguing, like any capital.’ It was another cultural reference to help her formalise the atmosphere of her play, to breathe life into the piece. ‘An actor needs to bathe in cultural references,' she says. 'I was lucky. I come from an intellectual mileu. An actor who doesn’t do so has to stop being so foolish. You have to go towards others. How are you going to construct something onstage without having been to see what’s going on outside you?’

Claire keeps herself educated and maintains a vivid interest in her surroundings: the Roma minority, politics, Europe. ‘I’m Swiss originally. I like it when there’s a difference between countries. I speak French, Italian and English – languages create the difference. We have to preserve that. Young people have to create Europe now, those people who did erasmus (the European student exchange programme - ed). They’re far ahead.’

‘You’ve got to be 100% engaged to get the bonuses in this industry. An artist is a visionary who transmits a message just like a politician can,’ concludes Claire. Her theory is based on decanting. ‘I really like this image of two glasses filling each other up. Someone else will fill up when I give him something.’ Giving, sharing, transmitting. It’s not surprising that when I ask Claire Ruppli what her favourite hobby is. 'Making love,' she replies, without blushing and without her sunglasses. 'Theatre is also about making love,' she finishes. Implacable.

See Claire Ruppli in 'La Pleurante des rues de Prague' at the Les Déchargeurs theatre until 9 October, from Tuesdays to Saturdays at 8pm