Released on 25 April in an English-dubbed version, a review of Franco-Iranian artist Marjane Satrapi's Oscar-nominated animation of a girl displaced in Vienna

French publishing house l'Association released their graphic novel Persepolis seven years ago. The four volumes of this autobiographical book of images has since achieved immediate success, with its cutting sense of humour and sharp criticism of Iranian society. Some journalists have even compared it graphic novelist Art Spiegelman's Polish Jew memoir Maus, which won the Pulitzer Prize Special Award in 1992.

Marjane Satrapi has produced something remarkable: by taking the layers of her childhood and adolescence, both violent and tragic, she brings her young alter ego to life. She was nine years old when Iran's famous Shah was expelled in 1979. At the time, the whole country was full of jubilation, including her own family, who were part of the intellectual bourgeoisie. However, their hopes turned to disenchantment when they soon realised that their country was not going to become a modern republic. The Iranian Revolution had handed the reigns of power to religious fanatics, who were far more terrible than their predecessors.

Almost overnight, Marjane found herself having to wear a veil in public. Powerless, she bore witness to organized raids committed by the regime, mourning the loss of her adored uncle, who was assassinated for expressing communist sentiments. When the war between Iran and Iraq from 1980 -1988 broke out, life in Tehran became more and more dangerous by the day: that's when Marjane's parents decided to send their only girl to live in Vienna. There, far from home, she would live freely and safely while she finished her schooling. However, freedom carried a price.

From paper to screen 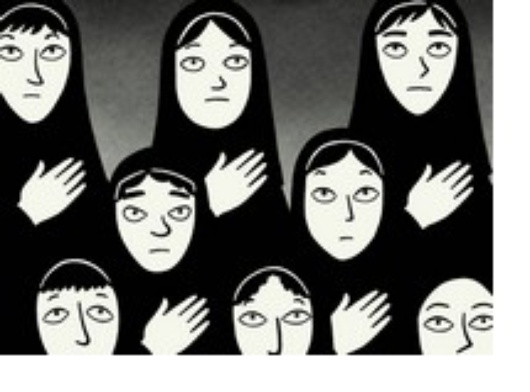 The author adapted her book to film herself. The expressionistic black and white film, in its striking simplicity, succeeds in showing the absurdity and cruelty of a religious regime; all through the eyes of a child.

There is nothing in the work that should come as any surprise. Satrapi wrote and directed it in collaboration with French artist Vincent Paronnaud. They decided not to use any special effects nor any computer animations, which makes this film such a rarity as so few animations today are produced by hand. 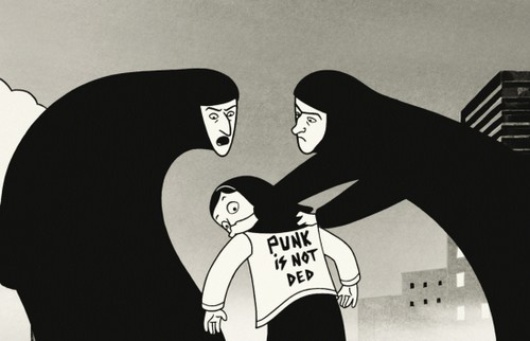 Not all of the scenes from the 350 pages of Marjane's comic strip book were included in the film. However, this doesn't take anything away of the author's rigour: the story unrolls lucidly on screen. Her images uncover a country where public life is largely made up of lies and artifices. The true face of its inhabitants are only expressable in the private realm.

The mood in is tense. The minute a viewer leans back and either laughs with or at the nice figures on the screen, sirens suddenly come out of nowehere, threatening religious heads step onto the screen, loved protaganists die. For the young Marjane, voiced by Chiara Mastroianni, death, war and prosecution are daily familiarities; they belong to a life which separated Marjane from her new friends at the University of Vienna.

Persepolis doesn't only criticise the brutality of Iranian power. Vienna, the symbol of the west, isn't also a non-paradise on earth. The teenage Marjane may be free to say and do whatever she likes in Vienna, but she also pays a heavy fine: feelings of dejection and statelessness. From Iran to Vienna, she isn't more than a strange curiosity, endlessly watched by the locals with mistrust and suspicion. In Iran, she knows all too well the sense of her freedom being suffocated, while having to watch her own people living under a dictatorial regime, her onscreen parents voiced by Sean Penn and Catherin Deneveuve. But Iranians love, drink, laugh and cry too. In the end, Persepolis evokes the author's difficult reality in choosing between her own country, and free will.

Read more about Persepolis on our cinema babelblog 'Light and Darkness'