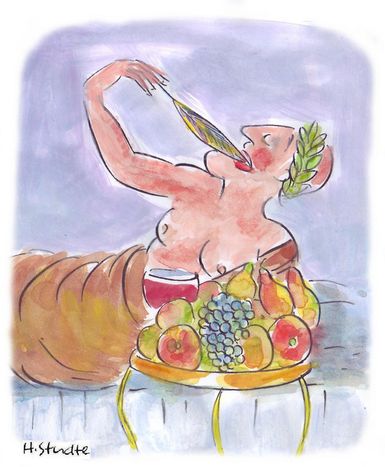 Did you have one too many? Was it something you ate? When Europe's head is over the toilet bowl, what kind of language comes out? Listen to the editorial team 'vomit'

Where some areas of life - not necessarily pleasant ones - are concerned, Europe's linguistic diversity knows no bounds. Across the continent, how you express the fact that you're going to hurl usually demands a degree of discretion. So a German will simply give oneself over when they throw up

), much like his French neighbour, who gives back (rendre

) what he has put away - most likely in excessive quantity.

Our Polish friends turn to folk traditions in this most private of moments and declare that they are devoting themselves to embroidery (haftować). Both the Polish and German nobility also seem to have been convinced that the French were more elegant even in the uglier aspects of human nature, since they borrowed their expression vomir

(vomieren; womitować). Of course, the word goes back to the Romans (Latin: vomire) and also spread to England (vomit

). The Romans were, after all, famous for their marathon feasts and their innovative use of feathers…

Staying on the subject of feathers: the Germans associate retching

with herons. According to Kluge's dictionary of etymology, their term 'Reihern'

comes from the watery regurgitations of large wading birds. The Polish, meanwhile, talk of generously 'freeing the peacock' (uwalniać pawia). But alongside feathers, flowers also sometimes get drafted in as a symbol for this unpleasantness: in France, you say gerber

to refer to someone puking - a 'gerbe' can mean 'bunch of flowers'. And if that's no good, in Germany you could also just call up Ulf or Jörg (Ulf