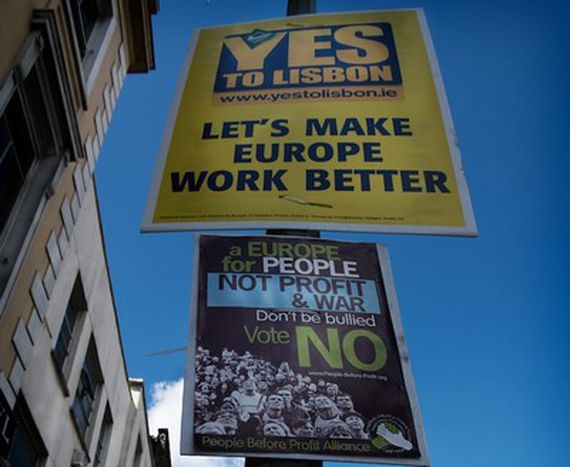 The battle for the second Lisbon referendum is heating up in Ireland; and now, the yes side have aircraft. CEO Michael O’Leary joins Seamus Heaney, U2 and Intel in throwing his weight behind a Lisbon yes

Voting yes to Lisbon will be the fashionable thing to do in Ireland this October, it seems. To date there is no stemming the flow of Irish notables to publicly declare their support for the treaty. The ranks of the yes camp have been swelled by prize-winning poets, rockstars, footballers and now business moguls. Ryanair CEO Michael O'Leary has declared that he will campaign for the yes side. The Ryanair announcement follows computer company Intel’s declaration of support on 20 August. Both companies are symbols of what once were the strengths of the compromised Irish economy, a combination of innovation and investment from abroad.

It’s not just words. O’Leary has declared that he will spend half a million euro on his campaign; €200,000 on newspaper and internet advertising, and €300,000 on ‘deeply discounted seats.’ The price-cut is intended to emphasise that the EU’s policy on lower air fares is one of the reasons that his airline exists.

The business chief, who is known for his media-baiting tactics, did not mince his words; ‘appalling mismanagement by Bertie Ahern’s government over the past decade left Ireland hopelessly unprepared for the effect of the property/banking crisis and the recession which would, if it were not for Europe’s help, have caused a collapse of the Irish economy,’ he said. ‘The difference between Iceland and Ireland was not one letter, but rather Ireland’s membership of the European Union and the euro.’