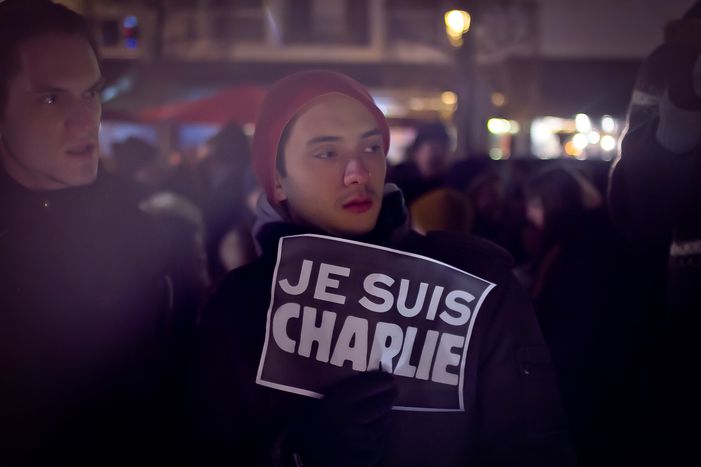 Charlie Hebdo: The War No One Wants

Twelve people were killed on Wednesday in Paris in a terrorist attack on the offices of satirical magazine Charlie Hebdo. Four more are in critical condition. The attack, which is presumed to have Islamist motives, will fuel hatred against European Muslims, some commentators fear. Others urge Europe to maintain a critical - and satirical - view of Islam.

The Paris attack could be grist to the mill of those who preach hatred of Islam, the independent daily Dennik N fears: "One could react by curtailing freedom and exercising repression according to the principle of collective guilt. ... That's precisely what extremists like the Czech populist Okamura and the German Pegida movement, which is exploiting the disappointment and frustration of Eastern Germans for their own proto-fascist goals, are doing. But such a reaction does more damage to free society than the threat of the Islamists. ... Condemning people simply because of their religion or nationality and discriminating against those who want to live in harmony with the principles of the democratic rule of law will only increase support for the Muslim fanatics. And it would turn Western society into an authoritarian system." (08/01/2015)

Muslims find Muhammad cartoons like those published by Charlie Hebdo deeply offensive, the conservative daily Milliyet points out after the terrorist attack in Paris: "Across the world, waves of prejudice are breaking over Islam like a tsunami. They are hitting millions of Muslim brothers and sisters. They are causing their exclusion. The result is that they are oppressed, they suffer and are forced to live in difficult circumstances. ... If only the drawings and cartoons of the prophet of Islam had never been drawn and hadn't provoked Muslims. The Christians' view of their prophet is different. They even let actors play Jesus naked on stage. ... That is the concept of freedom in christendom. But is it right to see Islam through the same lens? Clearly not. Because major differences in culture, mentality and religion separate the two." (08/01/2015)

With the attack on the editorial offices of Charlie Hebdo the war against terrorism in the Middle East and Africa has reached France, the conservative daily Le Figaro writes, stressing that France must strike back: "In times of war, the top priority is to remain united. But the second task is to arm ourselves. Morally, first of all - for how can we defend our values if we're not convinced of their absolute dignity? Then we must arm ourselves politically and legally: for too long we've remained complacent vis-à-vis our worst enemies, in the name of perverted humanism and excessive anti-racism. These 'lost children of the jihad', the fanatics who rage on the Internet, conspire openly against our country and its security. ... It's them we must strike out at. Without weakness or cowardice. When war is on our doorstep, it must be won." (07/01/2015)

De Standaard: Jokes must not be silenced by the attack, Belgium

Europe must address the causes for the radicalisation of Muslims but it must not abandon satire in the process, the liberal daily De Standaard writes after the attack on Charlie Hebdo: "We have to investigate with a spirit of openness why the fight has shifted to Europe. We must recognise that discrimination, exclusion and disdain exist, and that they all play a role in radicalising Muslims. If we fail to do this, we'll be powerless to avert the next attack. At the same time we must defend our freedom tooth and nail, and go on making brazen use of satire. Aimed at those who slit others' throats and riddle them with bullets, but also at our own fears. As Europeans, our best reaction to this lust for murder is laughter." (08/01/2015)

During their attack on the offices of satirical magazine Charlie Hebdo the terrorists shouted "Allah is great" several times. In the way Islam presents itself it indeed poses a threat, the liberal-conservative daily Corriere della Sera writes: "The problem is inherent to Islam. It is a combination of religion, culture and history that affects some one and a half billion people and prescribes all their rules, which - and this is the crux of the matter - are largely incompatible with the rules that apply in most other regions of the world. ... And that's not all. It perceives the rules of the others as blasphemous, as a curse against the God Almighty which must be punished by death. ... If this is what Islam is, then we want the option to criticise it as much as we like. And the right not to risk our lives in doing so. And we would like to see more than just individual representatives of Islam concede us that right." (08/01/2015)

Europe's Muslims must reject violence and show more tolerance after the attack in Paris, the daily Kurier urges: "Muslims must be able to tolerate criticism of their religion. Those who immediately see incitement whenever the peaceful nature of the Koran is called into question must learn a more open culture of dialogue. Last summer the Muslim political scientist Hamed Abdel-Samad stressed in an interview with this newspaper: 'There is no moderate wing in political Islam.' He went on: 'For us Muslims, it isn't the victim that's crucial, but the perpetrator. If he's a Muslim, we'll acquiesce.' The Egyptian is now in hiding. We still don't know who carried out the Paris attack, but everything points to them being radical Muslims. Even if the idea of a global caliphate sounds completely ludicrous, apparently there are also crackpots outside Syria and Iraq who are fighting to establish just that. This is what we must resist, as must all the Muslims who live in our societies." (08/01/2015)