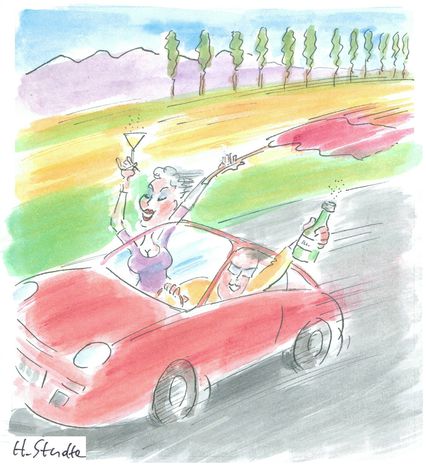 When the left become part of the bourgeoisie, the journalistic expressions describing them often take on an expensive culinary flavour. It’s almost as though the press had an appetite for delicious scandals…

The attraction of certain political personalities to life in high society is often mocked by journalists, who never hesitate to emphasise their penchant for champagne. While the bubbly beverage originated in France, it was in England that it took on political meaning: the tradition of raising their glasses to prominent socialists was invented here. These champagne socialists are called Champagnerlinken or 'champagne lefties' in Germany, while the Swiss are somewhat more inventive with the label Cüpli-Sozialisten, with Cüpli referring to the champagne flute. The fine drink’s political implications quickly traversed the continent; in his work From the other shore, Russian philosopher Alexander Herzen criticised an elite which praised the merits ‘of pastries and champagne’ while the poor outside were starving.

Germany also has a second term alluding to those with a taste for sparkling wine, with their Rotweinlinken (red wine lefties) an equivalent of Sweden’sRödvistvänster.

The same media also pick at well-to-do food, especially when it involves those famous little grey-black eggs which the British caviar socialists enjoy. French journalists may claim to have brought the expression gauche caviar or 'left caviar' to light, but Portuguese socialists can also be found enjoying their esquerda caviar.

In a step away from debauched culinary lifestyles, German journalists like to point the finger at their politicians, calling them the Toskanafraktion, the 'Tuscan faction'. If they associate the failings of their bosses with Tuscany it is above all because the latter appreciate being able to go on holiday – or even to retire – to this beautiful region of delicious food. The phrase emerged in the 1980s in an attempt to expose the transformation of a once oh-so-revolutionary generation into bourgeois people of pleasure.

The journalists Tuscany and indeed Italy as a whole prefers to distance themself from the ravenous appetites of their European colleagues, with Italian journalists preferring to talk of radical chic – emphasizing Italy’s reputation as a fashion capital. The ironic label originates from the US: Tom Wolfe, one of the creators of ‘new journalism’, denounced high society’s adoption of radical political goals in his 1970 essay ‘Radical chic’. However, it was in the land of la dolce vita in the 1970s that the term was first really used, under the pen of Indro Montanelli. The journalist wrote an article in the newspaper Corriere Della Sera criticising the well-off who, he claimed, were encouraging subversive actions by the reds. Nowadays, Massimo D’Alema, former prime minister and democrat party leader, seems to be the peninsula’s best politician when it comes to embodying ‘radical chic’. Depicted by the press as a great lover of sailing and an owner of several boats, it wouldn’t be altogether inaccurate to class him as belonging to the ranks of the ‘Tuscan section’.